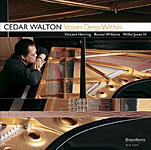 Since 2001, Cedar Walton's regular excursions into Rudy Van Gelder's legendary Englewood Cliffs studio for the HighNote label have consistently resulted in some of this century's finest mainstream jazz recordings. On Voices Deep Within he continues the tradition, once again demonstrating the vitality and endurance of (t)his music. Despite his ever growing popularity and critical acclaim (and next month's NEA Jazz Mastership), Walton has not yet been elevated to his deserved place in the pantheon of the greatest jazz pianists—alongside the somewhat senior Horace Silver, who he would eventually succeed in Art Blakey's Jazz Messengers, and the slightly younger McCoy Tyner, who he preceded in recording with John Coltrane. And although this disc is unlikely to bring him the fame that his talent warrants, it will please both dyed-in-the-wool Waltonians and newcomers just beginning to appreciate his artistry.

Walton, a prolific and prodigious composer of memorable melodies, an arranger of uncommon originality and a pianist with an immediately identifiable sound and style, is at his best here. He divides the date between slightly altered versions of his working trio (with Buster Williams sitting in for regular bassist David Williams and Willie Jones III in the drum chair previously occupied by Kenny Washington - Vocals, Lewis Nash and Joe Farnsworth, since the death of longtime Walton colleague Billy Higgins) and quartet (with Vincent Herring eschewing his customary alto saxophone exclusively to play tenor). The saxophonist's dark bittersweet sound is heard to good effect on four tracks, beginning with the opening title piece, a brightly swinging Walton original that recalls his Eastern Rebellion units featuring George Coleman or Bob Berg.

The trio tracks, relaxed readings of Eubie Blake's "Memories Of You" and the leader's own "Dear Ruth," as well as romantic renderings of "Over The Rainbow" and "Naima," showcase Williams' lyrical bass and Jones' remarkably mature work with brushes, along with Walton's uncanny ability to put new twists on familiar material. The album's showpiece is a reworking of his earlier arrangement of "Another Star"—an exciting tour de force that shines a bright light on the pianist's harmonic, melodic and rhythmic genius, with an engaging introductory vamp and countermelody that makes the Stevie Wonder classic his own. Herring's tenor swings melodically on this and two more quartet pieces—the leader's "Something in Common" and Sonny Rollins' "No Moe"—complementing the trio's superb sound nicely.

Voices Deep Within; Memories of You; Another Star; Dear Ruth; Something in Common; Over the Rainbow; Naima; No Moe.