BY GEORGE KANZLER
December 13, 2009
Sign in to view read count 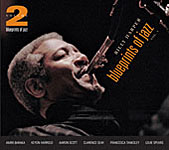 Tenor saxophonist Billy Harper has been keeping the jazz fires kindled by the ritualistic, incantatory side of the classic John Coltrane Quartet stoked and burning bright for over a quarter-century. Here Harper's working quintet, augmented by a second bassist, presents a program redolent of the processional and the chant. Over it all, Harper's coruscating, brawny tenor strides like a colossus (only Sonny Rollins may have a richer, fuller tone) with a charged intensity matching the roiling, loping, massed rhythms of drums, a pair of basses and the McCoy Tyner-ish tidal waves of pianist Francesca Tanksley. Adding to the incantatory aura of the CD is Amiri Baraka, whose recited prose poem, "Where Dat Stuff Come From?," is heard over the first two, long tracks, "Africa Revisited" (adapted from Coltrane's "Africa") and "Knowledge of Self."

Baraka reshapes the history of jazz and the Middle Passage into a mythic fable, full of praise for heroes and heroines (like the "blue wonderfulness" of Duke Ellington or Louis Armstrong, who people trailed around to see "if he had a gimmick. He did: It was him." Or how Coltrane "had to get Thelonious Monkishly profound.") Baraka reappears on the final track, "Oh...If Only," delivering his "Where Does the Music Come From?," both an affirmation of African musical roots and an acknowledgment of how far the music has come (he tells how Tony Williams played his drum kit in Africa and the people answered: "We hear you all but we do not understand you.")

In between the Baraka tracks are six pieces ranging from "a new kind of blues"; a gripping, pensive ballad dominated by a tenor sax/piano duet; a "Time and Time Again" sporting three meters in stormy cross-currents; Harper singing "Amazing Grace" (quite movingly) and the visceral highlight, "Cast the First Stone?," that Harper says, "has that raw thing that I like in the music," including a repeating four-note kicker that gives that grabbed-by-the-collar-and-shaken feel. Tanksley and trumpeter Keyon Harrold match the fierce intensity of Harper's solos, making the track a perfervid cri de coeur.

Africa Revisited; Knowledge of Self; Another Kind of Thoroughbred; Thoughts and Slow Actions; Time and Time Again; Who Here Can Judge Our Fates?; Amazing Grace; Cast the First Stone? (...If You Yourself Have No Sins); Oh...If Only.