Maximize your visibility at All About Jazz by upgrading your musician page from standard to premium. With it, you'll receive All About Jazz home page exposure, a highly stylized / ad-free musician page with bonus features and benefits, an ad, plus you control where you sell your music and so much more.
Learn More
452

BY ROGER FARBEY
December 12, 2009
Sign in to view read count 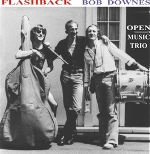 Bob Downes may be a name unfamiliar to many, but to some his name is synonymous with an electrifying period in British jazz. Downes was on the cusp of this new movement and recorded some idiosyncratic albums between 1969 and 1970. Deep Down Heavy was almost a rock album, whereas the as yet un-reissued Open Music recorded for Philips was much nearer to the free jazz genre. Two others were Diversions a trio album (for his own label Openian) and the more rock infused Electric City on Vertigo. This last album employed a host of well-known British jazz musicians including Ian Carr, Kenny Wheeler, Harry Beckett and Ray Russell. But it was his trio work that was the most intriguing.

Flashback is a mixture of rehearsal and live recordings made in 1973 in various locations, so the sound quality is never quite up to studio par. However, the compositions and performances more than compensate for this. The mood here is one of pulsating, rhythmic energy, not free enough to lose rock audiences and never clichéd enough to alienate jazz audiences. Of particular note here is the way in which multi instrumentalist Downes (whose main instruments are flute, reeds and vocals) gels with bass virtuoso Barry Guy along with Denis Smith on drums. The fiery and spontaneous execution of the pieces is reminiscent of Rahsaan Roland Kirk, Albert Ayler or even Sonny Rollins (on "West Eleven").

Guy's bass work on "Seashore" is stunning and he plays some terrific bass guitar on "Maya," essential listening since Guy virtually never plays electric bass. Flashback which Downes has made available on Openian (the first jazz album on his label in 35 years) is a fascinating piece of jazz history that should be savored. Although Downes no longer performs in public, this truly engaging set of recordings is a testament to the really exciting sound of his open music.