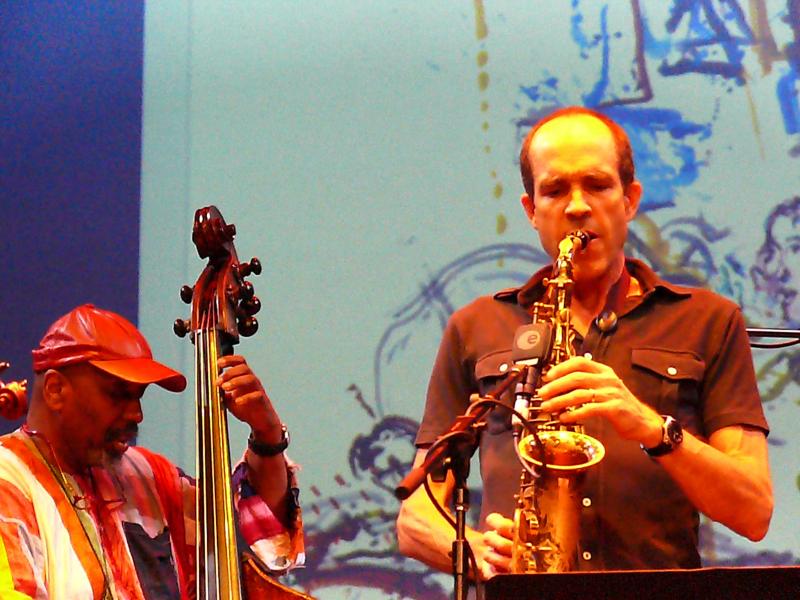 Trombonist Reut Regev's R*Time began the final night of the Vision Festival in exuberant style. Since relocating to New York from her native Israel in 1998, Regev has kept an inclusively wide contacts book, encompassing Latin, klezmer and rock, as well as the contemporary avant-garde. She notably holds down the trombone chair in esteemed composer/saxophonist Anthony Braxton's renowned Twelvetet +1, appearing on that ensemble's monumental 9 Compositions (Iridium) 2006 (Firehouse 12, 2007) box set.

R*Time is an expandable unit for the trombonist and her husband drummer Igal Foni, that ranges from duo to quartet and beyond, but in tonight's incarnation was specially expanded by the inclusion of storied New Thing pianist Burton Greene. Their brand of jazz ranged from boppish swing to bluesy swagger, by way of brooding riffs, dreamy electronics (from Regev) and choppy intricacies. From the onstage banter and expansive introductions it was immediately apparent that this was a communicative outfit. And so it proved, with playful interaction (particularly between Greene's maverick piano and the leader's trombone) the order of the day. 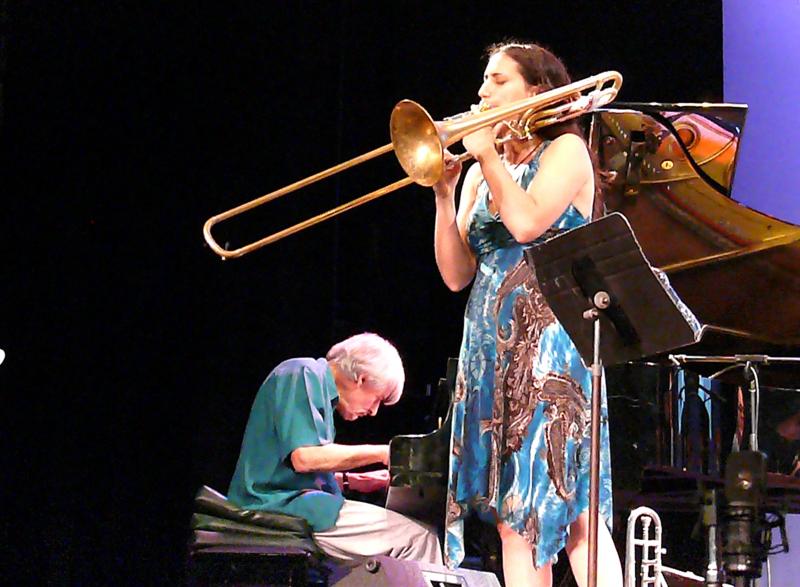 From the inaugural clarion blast to the heavens on valve trombone, Regev was an engaging presence. Her expressive gesticulation, with the slide sweeping from skyward ascent to pointed cues, was echoed in her playing: uninhibited, joyous, but displaying assured technique. On bass Adam Lane brought depth to the rhythms and took one invigorating break where the transition back into the thematic material was as noteworthy as the solo itself. Drummer Foni commanded multiple genres whether martial cadences or timbral variation, as when he rubbed wet fingers across his drumhead to produce a series of slurred booms. Together they fashioned a suitably upbeat start to the day's proceedings.

Quality standards were sustained in the next set: a flowing exposition by pianist Connie Crothers' Quartet, featuring long-time collaborators alto saxophonist Richard Tabnik and drummer Roger Mancuso, along with more recent colleague Ken Filiano on bass. This same line-up, with the addition of trumpeter Roy Campbell was responsible for the alluring Band of Fire (New Artists, 2011) documenting a 2010 concert at The Stone.

Though Crothers' studies with Cool School linchpin Lennie Tristano are a near constant reference, they left little overt trace in the close-knit colloquy that succeeded the swinging initial melody. Thoughtful but unfettered interplay, and a high level of understanding, characterized what was one of the festival's most cohesive groups. Filiano contributed any number of compelling statements with his bass during their two pieces, but also indulged in notable communion in keeping a buoyant pulse with Mancuso, and especially the pianist. During one fierce exchange, their eyes locked across the stage, as if testing each other's mettle. 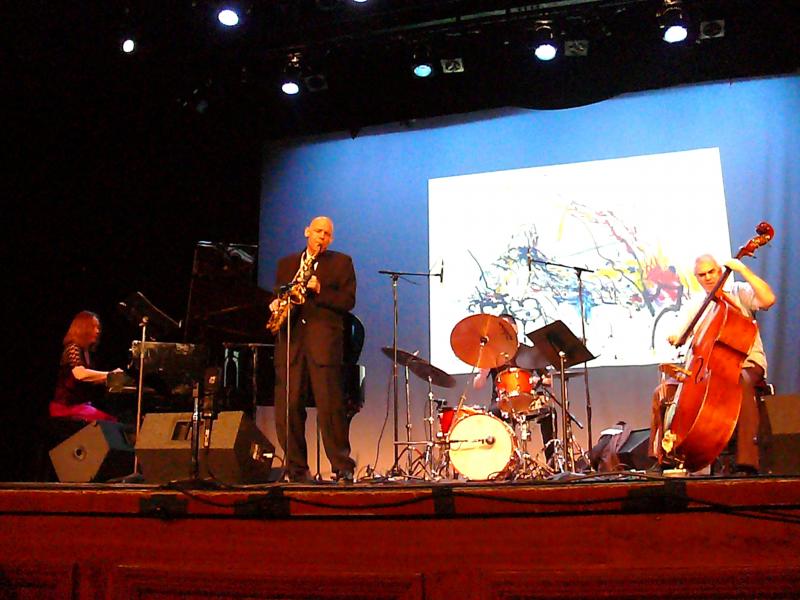 Crothers' jabbing chords jostled with the saxophonist's convoluted alto lines, which were seemingly reflected in his physical contortions as he blew. Tabnik never hit the extremes, always maintaining a surefooted control, even as he slid fluidly between notes. His unhurried demeanor made a compelling contrast with the pianist, whose intensity was more impulsive and animated. But even at her most turbulent extreme, she was fully aware of her environment, able to pull the diverging bandmembers back into the head, before taking it out once more. It was a stunning performance that fully merited the ensuing standing ovation.

Although the moniker coined by organizer Patricia Nicholson suggested an ad hoc grouping to complement her dance, the sextet actually followed charts. Comprising a dazzling constellation of Vision Festival mainstays who in previous years have each triumphantly led their own bands, there was a pleasing balance between daredevil flights and collective cohesion in a freewheeling session studded with bravura solos, raucous ensembles and rugged group empathy, accompanied by the dancing and occasional vocals of organizer Nicholson.

Trumpeter Roy Campbell made the introductions and composed some of the tunes. His "Lament for Billy Bang began with an appropriately mournful air before a fanfare led into a round of impassioned expositions. Alto saxophonist Rob Brown excelled with a typically tightly wound, heart-on-sleeve outpouring whose emotive weight benefited from his bittersweet tone and controlled harmonic dissonance.

On piano Cooper-Moore enjoyed greater breathing space than with David S. Ware, mixing fine blues-tinged assertions and angular comping. William Parker and Gerald Cleaver handled the sometimes in, sometimes out rhythmic duties with aplomb. Jason Kao Hwang's searing violin reveled in wah wah effects and bent notes, before unfurling into a final number that encapsulated much of what is best about the Vision Festival: moving seamlessly from a joyful celebratory bounce, recalling New Orleans polyphony, into righteous atonality and back again. 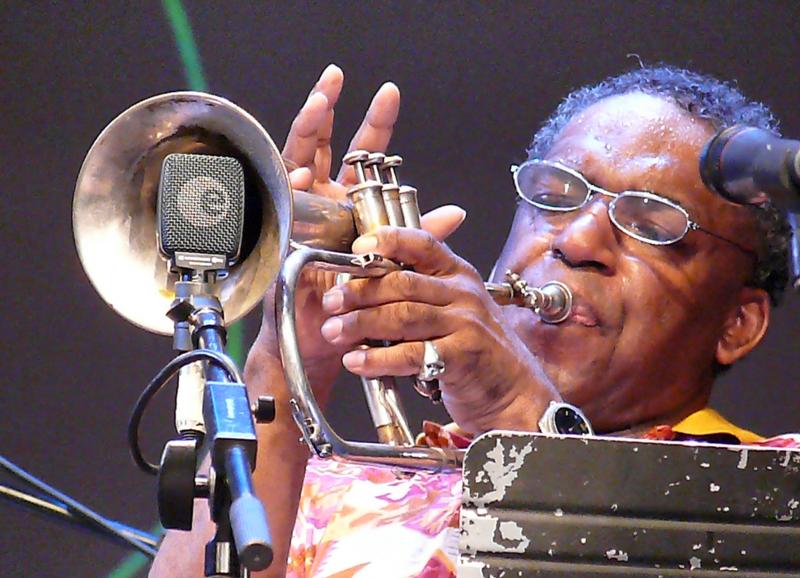 Tributes can have the tendency to be maudlin or inconsequential but, under the direction of William Parker, the amassed might of a 20-piece string section dedicated to violinist Billy Bang hit both emotional and musical highs. Bang had been scheduled to appear at this year's festival before his untimely demise in April 2011, but his band was here tonight, along with a selection of horns supplementing the strings.

Right from the majestically soulful opening sweep of an extended rendition of Bang's "Mystery of the Mekong," it was clear the spirit was in the house. Kyoko Kitamura delivered heartfelt lyrics penned by Parker, while he orchestrated a backing riff to accompany her. There flowed a sequence of cameos from the assembled throng as Parker skillfully concocted arrangements on the spot. Bill Cole's piercing double reed was pitched first against a phalanx of pizzicato violins, then in duets with the strings of Henry Grimes and Mazz Swift. James Spaulding's alto saxophone burned as everyone free associated until reaching a wonderful crescendo of dissonance, at which point Parker created space for a floating duet between Andrew Bemkey's piano and Roy Campbell's flute, before a return to the soaring theme. 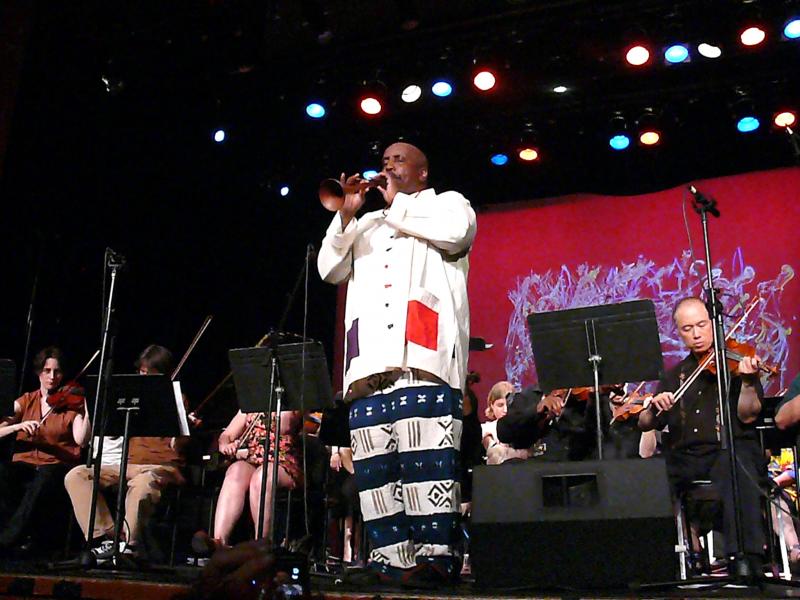 Next followed a spirited version of the late violinist's "Saigon Funk," spotlighting the incisive trumpet of Ahmed Abdullah and the tender violin of Jason Kao Hwang, before breaking into a wild orgiastic blowout, fittingly named "Ascension for Billy Bang." Parker blew hard on a double reed instrument, at first alone, then in the company of Cole, before returning to the front of the stage to establish an incantatory riff which had the entire audience standing and screaming, concluding with Parker strutting his stuff against a juddering slab of funk for a rousing and highly charged farewell.

It was clear from Patricia Nicholson's announcements during the course of the festival that without significant financial support over the coming year the future of the Vision Festival is in serious doubt. To lose such a renowned shop window for hometown talent would be a crying shame. Nowhere else can fans partake of such a concentration of avant jazz in such a friendly atmosphere, and this year's event was well up to the standard of previous editions. Outstanding shows included the whole of the Peter Brötzmann celebration, Dawn of Midi, Matthew Shipp/Evan Parker, Paradoxical Frog, Planetary Unknown, Connie Crothers, the All Star Mystery Collective and William Parker's Billy Bang Tribute. However, a series of shows in the downstairs theater filled the gap left by the cessation of the customary Saturday afternoon showcase for emerging artists, and demonstrated that the future of the music is in good hands.