Born and raised in Israel, Trombonist, composer and bandleader Reut Regev started shaping her impressive reputation on the Jazz scene at a young age. At only five years old she was introduced to the piano, and then added the trombone to her repertoire at age thirteen. While in high school, she had the opportunity to play with some of Israel’s most creatively improvisational musicians, as well as perform at Israel’s top Jazz Festivals. Reut eventually decided to concentrate on her beloved trombone, and has proven to be a remarkably inspiring innovator. After serving in Israel’s army band as first Trombnonist and soloist, Reut made her way to NYC, joining her now husband, drummer Igal Foni.

Reut has been living and creating music in NYC for over a decade, collaborating, recording and touring with some of the finest musicians in various fields, including Latin, Klezmer, Rock, Blues, Jazz, contemporary classical and improvised music. Anthony Braxton, Frank London, Butch Morris, Joe Bataan, Firewater, Elliott Sharp, Dave Douglas, Metropolitan Klezmer, Hazmat Modine and many more have picked Reut as their Trombonist of choice for tours, recordings and other projects.

After years of working mostly as a side musician, Reut has finally decided to put her own spin on things. Together with her husband Igal and some of the top musicians in NYC, she has recorded her debut Album "This is R*time" Following the debut R*time's sophmore CD "Exploring the Vibe" was released on Enja Records in 2013.

All about Jazz calls the music “stunning”, “Breathtakingly expansive and unabashedly modern”, the Jazz Times says “wildly imaginative and virtuosic”, “a provocative brew that straddles the heavy metal bebop devide”, and the IAJRC - “a knock-out”.

Since the Fall of 2009 Reut, Igal and R*time has been touring extensively, being featured in multiple European and North American Festivals, and receiving fantastic reviews and support.

Reut continues to create and her plans for the near future include releases with some of her other projects, including a duo with Igal Foni, and “Brassix”, a Brass centric Ensemble, playing compositions originally commissioned by the Festival of New Trumpet music.

And of course, R*time is not quite done exploring yet! 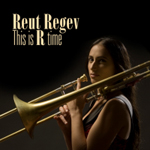 From: Eternal Dance
By Reut Regev

From: Sheroes
By Reut Regev

From: R*Time Exploring the Vibe
By Reut Regev 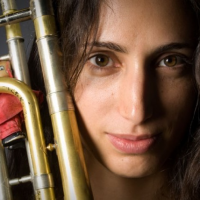 All About Jazz musician pages are maintained by musicians, publicists and trusted members like you. Interested? Tell us why you would like to improve the Reut Regev musician page.