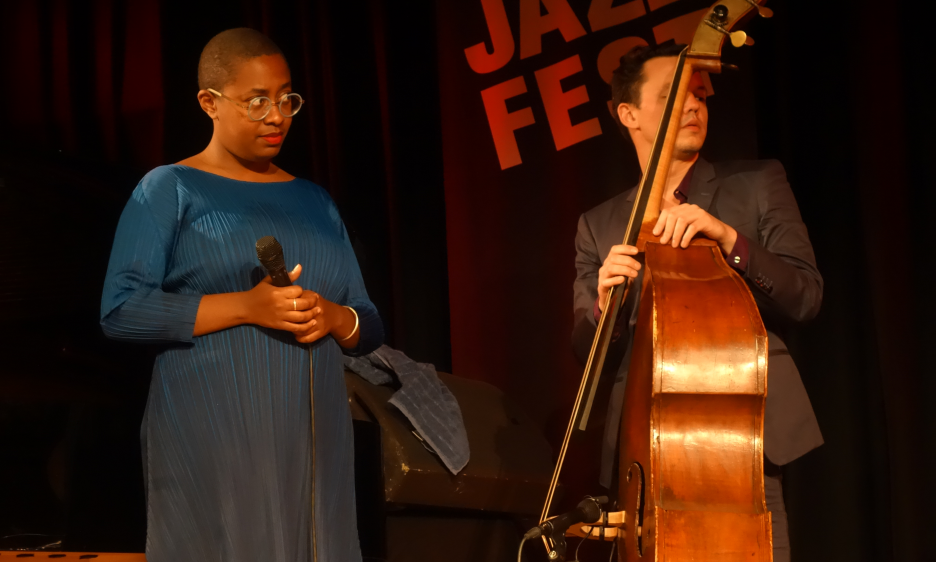 By HENNING BOLTE
May 26, 2018
Sign in to view read count
Olafshallen, Dokhuset and other venues
Trondheim Jazzfest
Trondheim, Norway
May 8-12, 2018

Trondheim, Norway's third largest city, is the country's main center of intelligence in science, engineering and technology. It holds a key place in Norwegian history and identity in general, and in jazz/music specifically.

The six-day Trondheim Jazzfest is part of the coastal series of spring festivals along with Stavanger and Bergen. For as long as I have known it, Jazzfest Trondheim has been a matter of unpredictable diversity, astonishing contrasts and opposites. It is not forced into a single direction. The next different thing is always 'around the corner,' which turned out to be the case again in this year's edition. This report is necessarily selective then. Running from 1979 with an interim hiatus from the mid eighties into the early nineties it reached its 30th anniversary this year.

Not only are different things 'around the corner' at Trondheim Jazzfest. You quickly learn that almost everything is literally around the corner (within walking distance) -only the director of the fest, Ernst Wiggo Sandbakk, could be met regularly on his bike. This year's anniversary edition was centered at the Olavshallen complex, which was built some 30 years ago and opened in 1989 with a concert by Canadian pianist Oscar Peterson. Lots of last century things here appear including the compositions by maestro Chick Corea who made the 'last century' reference a running gag during his concert with the Trondheim Jazz Orchestra, a collaboration established a time ago on the threshold of the 21th century.

Trondheim started the first academic jazz-education in Norway at the end of the '70s of the last century that is now part of the Music Department of Norwegian University of Science and Technology (NTNU). Trondheim stands for an innovative approach of institutional jazz education. It has yielded a long series of musicians of the post-Garbarek generation with a strong impact on the development of Norwegian jazz in all its facets over the past few decades such as Nils Petter Molvaer, Arve Henriksen, Mathias Eick, Hakon Kornstad, Trygve Seim, Tore Brunborg, Daniel Herskedal, Kjetil Møster, Mats Eilertsen, Ole Morten Vågan, Per Zanussi, Ola Kvernberg, Thomas Strønen, Paal Nilssen-Love, Per Oddvar Johansen, Gard Nilssen, Ingar Zach, Christian Wallumrød, Ståle Storløkken, Eldbjorg Raknes, Kristin Asbjørnsen to name a few, names that indicate a noteworthy diversity of temperaments and temperatures in their ways of music making. They all immersed themselves in the special Trondheim learning environment, which produced a remarkable output of musicians that left their distinctive mark over the last three decades.

The festival opened to a packed 1200 seat Olavshallen auditorium with the sound of Gregory Porter's eminent voice. Porter delivered entertainment of the finest carrying his audience generously through a multitude of rich and captivating songs, always telling a touching story, and wonderfully giving weight to every clearly articulated word. What made it so delightful was a deep-reaching, strong endearing voice embedded in, or surrounded by, a fiery, warm sounding band of five impeccable musicians. Jahmal Nichols is a mighty bassist and Emanuel Harrold's drumming is intense, differentiated and restrained at the same time. Pianist Chip Crawford and hammond organist Ondrej Pivec complemented each other in a beautifully orchestrated way. Saxophonist Tivon Pennicott dished up a full Illinois Jacquet-type-of-sound. It was the specific fabrics of space, flow, sustain and pointed rhythmical accentuation that lifted it up to a gorgeous quality. This deeply rooted Afro-American music has been growing through the years to an increasingly higher level of sophistication, not getting worn out but gaining higher intensity instead.

The opening by an eminent vocalist emphasized the importance of the human voice in this musical field, and gave leeway to a total of 18 vocalists in the festival line-up, a strong and clear representation.

The first night already offered a personal highlight immediately after Gregory Porter's opening concert, namely the twosome of guitarist Bill Frisell and bassist Thomas Morgan. They entered the stage at Trondheim's intimate venue Dokhuset: "I'm Bill and this is Thomas." An exceptionally beautiful, clear, intense and joyful flow of music started with those words. It revealed two confluent musicians, two confluent instruments, as one confluent musical happening. It became a journey of momentum unfolding.

Quite loosely, and unerringly, they circled around each other and a common imaginary center, thereby subliminally giving shape to every single note, melding into a flowing line fanning out and contracting—Morgan by (de-)intensifying the sustain of the sound acoustically and Frisell by subtle electronic effects and loops. Both drew each other in, set each other free, entered and left, drifted and lifted, marked and effaced. It was ultimately fascinating, especially the sustained concentration they maintained over such a long stretch of time. Only a few musicians accomplish this in-statu-nascendi mode with such attractive momentum quality.

The distinction between basic melodic lines, extensions and variations became completely blurred. An encore seemed inevitable but, before departing, Frisell took the floor conjuring the remote past of touring in Norway in the early 80s (of the 'last century'), touring the old Dokhuset included, with another magic bassist, Arild Andersen, a key voice of the older Norwegian generation, who, as it turned out, was present in the audience. Frisell recorded his first duo album with Andersen, In Line, for ECM in 1982. With the words "the place looked quite different then, Arild! We were on a mission then" he and Morgan gave a magical rendition of John Barry's "Goldfinger." Scenes of the first time I saw Frisell in the early eighties (at the Concertgebouw in Amsterdam) playing in the quartet of Jan Garbarek surfaced up. The young guitar students from the conservatory sitting beside me told what they had recognized in the concert of Frisell's ECM album Rambler from 1985. Times seemed to fuse, awesome moments!

Next day there was the opportunity to watch a new documentary on Bill Frisell by Australian filmmaker/musician Emma Franz on the basis of a still fresh live concert experience. Franz succeeds beautifully in letting the viewer perceive how you get into the essence of things by not demarcating things but by opening your mind repeatedly. Step by step she draws a picture that clears the view on this mindset, attitude and way of doing things. In watching the film (see the trailer here) you learn what the power of smiling is where reconciliation of seemingly incompatible things is concerned—a counterpart to Paul Motian's philosophical laughter. You learn how certain things came about in a thrilling way. Drummer Joey Baron is not only a key figure in the early development of Bill Frisell but also a wonderful narrator of that same story (for more see also the review by John Kelman on All About Jazz).

Andersen has never shunned the huge sound with his bass fiddle together with other strings as its natural extension (or echo) flowing into or emerging from space. He has been a key musician from his beginnings in the early 70s. Here not only was the variegation of the pieces highly enjoyable but also and especially the shift from leading to a more restrained role in the background, the back and forth dynamics that kept the performance so lively and captivating. It confirmed Andersen's status as a string man in heart and soul playing his instrument truly like a dark fiddle. Witness also one of his central works Hyperborean (ECM, 1997), a commission for the Molde Festival with renowned Cikada String Quartet. A reprise of the work with Trondheimsolistene took place the next day at Victoria Nasjonal Jazz Scene) in Oslo -available on demand at the venue's website and Youtube channel.

The outstanding performance of vocalist Cecile McLorin Salvant's unit comprising pianist Aaron Diehl, bassist Paul Sikivie, and drummer Lawrence Leathers at the intimate venue Dokhuset, was the first time I saw her, and was nothing less than a revelation for me. She has a wonderful talent to bring a song of life to life on stage. She quickens the situation and illuminates the emotional constellations the song is about not only by wonderful modulations of her voice. She has a great gift to enact the situation by gestures, gazes, smiles, by halting and letting loose. It's the way she conjures up the drama, joy and sorrow in close connection with her audience and there's a lot of tongue-in-cheek Fats Waller like enjoyment too. The music is fully in the classical tradition of the American songbook with lots of playful creative twists, especially by pianist Aaron Diehl, making it current, delighting from moment to moment in a captivating joyful flow. As in the case of Gregory Porter, the instrumental musicians played a crucial role in the achieving her kind of personable, drama-driven singing. For me, Salvant's rendition of Kurt Weill/Langston Hughes' "Somehow I never could believe" became the most captivating Weill since Betty Carter's rendition of "Lonely House." Savant's performance was a striking example of giving old songs a fresh and true in-depth impact.