Tivon Pennicott was born in Marietta, Georgia in December of 1985. He began studying tenor saxophone in high school, garnering recognition early on as an outstanding soloist in the Lincoln Center's Essentially Ellington competition, as well as the Georgia All-state Jazz Band. In 2004, he relocated to Miami to study at the Frost School of Music, where he had the opportunity to perform alongside artists such as: Dave Liebman, Randy Brecker, and Maria Schneider. While still in college, guitar legend Kenny Burrell invited Tivon to join his quintet. He would then go on to appear on Burrell’s 2008 live release, "Be Yourself." Tivon’s continuing association with Burrell has led to numerous performance opportunities at many of America's greatest jazz venues including: Blue Note, Billboard Live (Japan) Catalina's Jazz Club (Los Angeles, Yoshi's Jazz Club (Oakland and San Francisco), Smalls Jazz Club etc

This article first appeared in Jersey Jazz Magazine. When she was eight years old, Anais Reno (now 18) began taking voice lessons from singer/songwriter Sarah Tolar. “I feel very grateful to her," Reno said, “because after a couple of months of working together, she sensed that maybe some older American Songbook music would be ...

Label: Harbinger Records
Released: 2021
Track listing: Caravan; Mood Indigo; Still in Love; Chelsea Bridge / A Flower is a Lovesome Thing; I'm Just a Lucky So-and- So; It's Kind of Lonesome Tonight; Day Dream; I Ain't Got Nothing but the Blues; All Roads Lead Back to You; U.M.M.G. (Upper Manhattan Medical Group); Lush Life; Take the "A" Train.

As heard on his cosmic new album, Spirit Garden (New Phrase Records, 2020), New York-based tenor saxophonist, Tivon Pennicott, is a sonic healer. Not only does his latest record convey the late-thirties artist's masterful composing abilities, it shows his deep engagement with everyday struggles yet also his effort to transcend them with his great willpower and ...

Kurt Elling has been the dominant male vocalist in jazz for the past 20 years, winning the Down Beat Critics Poll from 2000-2013. Gregory Porter released his first record in 2010 and was recognized in the same poll as a rising star in 2013. He won the critics poll in five of the past seven years, with ...

The inimitable musician and bandleader, Jon Batiste, releases Chronology Of A Dream: Live At The Village Vanguard on November 1. Recorded during his six-night residency in the fall of 2018, the live album is a follow up to his recent critically acclaimed release, Anatomy of Angels: Live at the Village Vanguard, and is part two of ... 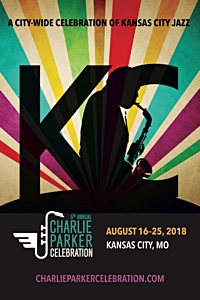 The Charlie Parker Celebration returns and will celebrate its 5th anniversary. Helping celebrate the 5th anniversary will be a local, multi-talented treasure, who has become a national and international entertainer, while spreading the word of Kansas City jazz. The treasure and one of this year’s Artist-in-Residence is Lonnie McFadden, a singer, trumpeter and tap dancer. Add ...

Olafshallen, Dokhuset and other venues Trondheim Jazzfest Trondheim, Norway May 8-12, 2018 Trondheim, Norway's third largest city, is the country's main center of intelligence in science, engineering and technology. It holds a key place in Norwegian history and identity in general, and in jazz/music specifically. The ...