Julien Desprez is a musicianand performer based in Paris. Jazz and rock were his early musical loves but they evolved rapidly to free forms where body and space find their places through sound.

As his practice progressed, his conception and approach to his instrument as well, and music and space changed. He is now considering the guitar more likea battery, an organ, a modifiable instrument deployable at will.

Through a mix of actions on the instrument and a play of foot on effect pedals, taking inspiration from the technique of Tap Dance, it completely opened the possibilities, sound and physical environment of the instrument. This results in a practice where body is engaged to its fullest.Now evolving between sound art, performance and contemporary improvisational music, his work today is centered around all the questions that exist within a stage space, through body, space, sight and light, but where the sound remains the central pillar.Julien is also a co-founder of the Collectif Coax, a music cooperative based in Paris and created in 2008, which was recently labeled "Compagnie Nationale" by the French Ministry of Culture and Communication. 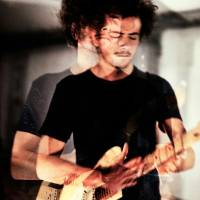 All About Jazz musician pages are maintained by musicians, publicists and trusted members like you. Interested? Tell us why you would like to improve the Julien Desprez musician page.