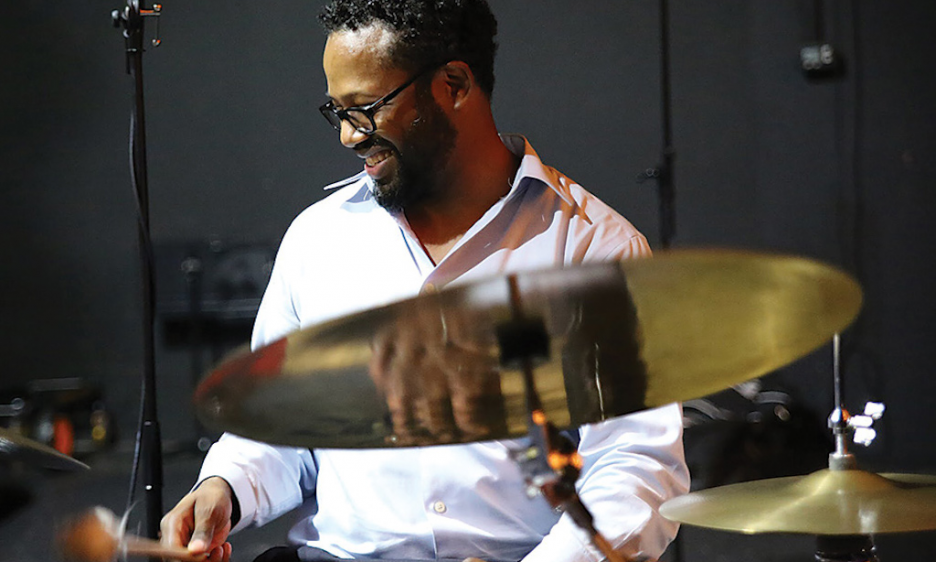 Dr. Mark Lomax II had a problem. He was to premier his creation 400: An Afrikan Epic to a sold out audience at the historic Lincoln Theatre in Columbus, Ohio, but to do so, he was required to condense his three movement, twelve part heroic poem into a 45-minute performance. You get the feeling Lomax loves a challenge. Nearly four years ago, he realized that 2019 would mark the 400th anniversary of African slavery in the land that would one day become America. He set out to compose a symphony (he holds a doctorate in classical composition) but, instead, an epic poem emerged. He secured a commission from the Wexner Center for the Arts at the Ohio State University to complete the recording of his vision. The fruits of that effort produced 12 albums and 8½ hours of music with 14 musicians. The core of which is saxophonist Eddie Bayard, pianist William Menefield, bassist Dean Hulett, and did I mention Lomax is a master drummer -a modern day griot?

Credit must be given to the Wexner Center for naming Lomax as an artist-in-residence in 2018. For too long, the organization has subscribed to the East Coast/West Coast fly over mentality, looking beyond its own community for artists and art, instead of right here in Ohio. A state that has produced, Art Tatum, Nancy Wilson, Joe Henderson, Fred Hersch, and Albert Ayler. The list goes on, but we need only to look locally to Columbus' own son Rahsaan Roland Kirk, and, of course, Mark Lomax.

For the premier Lomax featured his quartet, plus an additional string quartet with Norman Cardwell-Murri (viola), Mary Davis (cello), John Lardinois (violin), and Devin Copfer (violin). Opening with (of course) the drum, Lomax applied mallets before Menefield's quiet piano and then strings announce the dawn. The music settled into a space somewhere between chamber music and jazz. It is indeed a soundtrack, and it reminds one of Bill Lee's orchestral soundtracks for his son, Spike Lee's films. There is an effortlessness about Lomax's compositions, maybe it is because his symphonic writing is built upon the foundations of percussion and a blues tradition. Both of which speak to music audiences have grown up listening to, not only jazz, but rock and hip-hop music. Lomax's chronicle of his people kidnapped from their African Garden of Eden mixes agitation energy with stoic bravery. This odyssey, and most great modern jazz, is required to deal with John Coltrane's music. With Bayard on soprano and tenor saxophone, there are moments when one hears impressions of Coltrane's well, Impressions (Impulse!, 1967) and the glory of A Love Supreme (Impulse!, 1964) bleeds through, with Lomax channeling Elvin Jones, Menefield -McCoy Tyner, and Hulett -Jimmy Garrison. But there's more to 400: An Afrikan Epic than the classic quartet. Lomax envisions what Coltrane might have subscribed to if he had lived beyond age 40. Incidentally, Lomax recently turned 40.

The program selected pieces and parts of the 12 recordings, highlighting stunning solos from Lardinois' violin, Menefield, Bayard, and, of course, Lomax. Menefield's solo piano introduction was a soulful offering of gospel and blues that stirred the audience, and Bayard held court with his ever escalating horn. Throughout the performance, it was the griot, Lomax that provided the pulse, the drive, and the message.

I suspect if Homer were to perform his Iliad or Odyssey, or Dante Alighieri his Divine Comedy today, the presentations would be abridged to accommodate the Instagram/Twitter attention spans of a modern audience. This is true for Lomax at this premier, but his message has not been compromised.