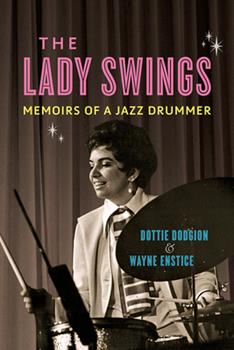 Dottie Dodgion isn't reluctant to share the trials and tribulations endured throughout a long life. Dodgion was raped by her stepfather at age ten, afflicted with early stage polio as a teenager, endured physical, sexual, and emotional abuse at the hands of men in intimate relationships, suffered a back-alley abortion, and repeatedly encountered all manner of sexism on and off the bandstand. While these ordeals and many others are integrated into an account of her decades as a struggling jazz musician, she is not asking for sympathy, she is not trying to make refined points about sexual politics, nor is she looking to settle old scores. In The Lady Swings: Memoirs of a Jazz Drummer, Dodgion casts herself as an irrepressible spirit and a striver, putting the hardships into perspective by emphasizing her devotion to the music, expounding on the gradual evolution of her artistry, and celebrating the highs of making music with musicians ranging from jazz royalty to figures who don't appear in the music's history texts.

Dodgion's jazz education began in childhood, prior to World War II. Far removed from the conventions of school bands and private music studies, a wealth of experiential learning took place in strip clubs as well as at record listening sessions in motel rooms, courtesy of her father, an accomplished jazz drummer. Years before she picked-up a pair of sticks, Dodgion "absorbed a certain amount of rhythm from him" during rehearsals and shows. Sitting beside him on the bandstand, she could see how he got a certain sound on the kit, and gradually began to understand the logic of what he played.

Father and daughter often stayed up until the early hours of the morning, listening to records by Billie Holiday, Duke Ellington, Count Basie, Woody Herman, as well as many other big bands. Staying silent while the music was playing and saving questions for later was a cardinal rule. "My father listened so hard that his example made me listen." Another principle she took to heart was that real jazz musicians don't work day jobs. The security they provide, he insisted, is deceptive and corrupting. "My life has been about jazz all the time because, as my father told me, 'If you go for the money, you'll never get to play your heart.'"

Regular weekend visits to Streets of Paris strip club, where her dad led the house band, were also "an important part of my education about how men and women treated each other. The word ugly comes to mind." Her father offered critical commentary on interactions between couples, claiming, in one instance, that a brutal assault constituted a face-saving gesture on the part of the man. It could have been avoided if only the woman hadn't the temerity to slap him first in public. In the end, Dodgion says, "I realized that my father was teaching me how to be one of the guys."

A dismissive attitude towards traditional musical literacy often surfaces in Dodgion's account of her decades as a professional jazz musician. She proudly describes herself as "a self-taught drummer who got help along the way," and steadfastly declined to learn to read music or engage in conventional study of the instrument. Her methods of coping with bands employing written arrangements are laid bare in stories of sitting in with Lionel Hampton, an impromptu audition and short-lived gig with Benny Goodman, and a one-night substitution for Mel Lewis in the orchestra he co-led with Thad Jones. Her finely honed listening skills, an aural comprehension of these bands' repertoires, as well as an "insider's knowledge" of how an unfamiliar piece of music will evolve were sufficient to carry the day. "Other drummers didn't know Benny's time or how he would phrase," she asserts, "but I'd been to school for it, you might say, since I was 9 years old."

Dodgion's insistence on operating without the benefit of sheet music and lack of interest in conventional rudiment-based technique should not be confused with an absence of principles regarding her role in jazz ensembles ranging from combos to big bands. The goal was to be part of a rhythm section in which "all three musicians are close together in their interpretation or division of the time...it's complete Nirvana." She thrived as a supportive player, displayed little interest in taking a solo, and is critical of drummers who rely solely on power and volume to lay down a tempo. Taking the advice of her longtime mentor, bassist Eugene Wright, "I listen to the overall sound and then I play right in the middle or just under the rest of the band so I never get in their way." Just as important was Wright's insistence that when working with subpar players Dodgion had a responsibility to elevate their musicianship and make them swing.

Throughout the book Dodgion displays remarkable tenacity in doing whatever was necessary to get a toehold in the business of playing jazz. For example, at Bop City in San Francisco in the early 1950s, the It Club in Los Angeles in the later part of the same decade and the Half Note in New York City in the early 1960s, she was always hanging out and listening. Dodgion made her presence known without getting in the way, took advantage of any opportunity to sit in, gained valuable experience and— sometimes—received an offer of compensable work. "If a drummer took sick, was late, had habits, or lived in New Jersey and couldn't get across the bridge," she says of nights at the Half Note, "I was there and, by God it always paid off!."

The realization that her brief time in Benny Goodman's band would not necessarily lead to other high-profile opportunities was one of many humbling experiences in Dodgion's volatile career. "Yes, I'd rung the bell, but there were so many important musicians in New York doing impressive things that my small victory quickly slipped from view and I was just a footnote again." Nevertheless, she persisted. Playing casuals, weddings, and proms, and backing comedians and dance acts often paid the bills, while occasional protracted engagements with the likes of Marian McPartland, Wild Bill Davison, the Al Grey/Billy Mitchell Quintet, Ruby Braff, Joe Venuti and Melba Liston and Company kept her soul and jazz cred intact. In a move that is likely to endear her to purists, Dodgion left a lucrative, ongoing gig with Ron Rose because he played the melody to "Tie A Yellow Ribbon 'Round the Ole Oak Tree" like Lawrence Welk one time too many.

Dodgion's insistence on leaving the rough edges of her life intact for all to see, gleefully serving up her times in the music in all their messy glory, makes for compelling reading. The book is recommended to anyone interested in jazz musicians, particularly women, who are outside of the pantheon. The Lady Swings belongs on the short list of essential jazz autobiographies.