Eugene Wright, was an American jazz bassist, best known for his work as a member of The Dave Brubeck Quartet, in particular on the group's most famous album Time Out (1959), with pianist Brubeck, drummer Joe Morello and saxophonist Paul Desmond. Wright, nicknamed "The Senator", had played with the Lonnie Simmons group, and led his own band, the Dukes of Swing, but his big break came when he was recruited by Dave Brubeck. He had a very solid, Kansas-city style, theoretically at odds with, but in practice an important component of, Brubeck's cool, mannered jazz. Best known for his steady, concise contributions to the Dave Brubeck quartet for a decade in the '50s and '60s, Eugene Wright was a dependable, never flamboyant bassist 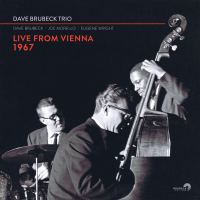 Considered one of the foremost exponents of the cool jazz style--despite often generating intense block-chorded heat as a pianist--Dave Brubeck was also known to lead the finest quartet bands in the jazz world. Of the several groups he led throughout his career, the most successful version was his classic quartet from 1958 to 1968 comprised of ...

The lure of a lively good party has long made Hamburg, Germany, a global destination spot. Young and old, male and female, and all in between have, at one time or another, succumbed to the city's salacious history, its tantalizing port of entry, its raucous streets, denizens, and rathskellers. So, can we really judge or speculate ...

We begin the 684th Episode of Neon Jazz with veteran jazz trombonist Steve Davis and follow that up with a song by his mentor Jackie McLean. Quite a bit of music came out during 2020 and that trend continues into 2021. We look back at music released by Walt Weiskopf, Joshua Redman and Andrea Brachfeld in ...

When, for the first and the millionth time Paul McCartney is queried by lazy savants and crazed fans about what he would have cut from epic double White Album (Apple, 1968) to make it the strongest of the strongest single disc ever, the cutely weathered one just replies “It's the Beatles' bleedin' White Album, man" and ...