By KARL ACKERMANN
July 8, 2019
Sign in to view read count
Pace and Black Swan faced two insurmountable obstacles. White-owned record labels who had ignored the African American market noted Pace's success. Though some had recorded black artists, they now saw greater market demand. With larger advertising budgets, they signed blacked artists and promoted them in publications across color lines. Black Swan suffered a crisis in reputation as well. While promoting the label as one that employed and recorded only African Americans, it came to light that it was not always the case; the company had occasionally hired white musicians to support its headliners and had subcontracted Paramount Records' Midwest production facility to press discs when they couldn't keep up with demand. Black Swan filed for bankruptcy in December 1923, and the company was acquired by Paramount Records in early 1924, phasing out the label's brand a few months later. A limited series of jazz and blues reissues were released under a resuscitated Black Swan banner in the 1990s.

On the Lake Michigan shoreline, in city of Port Washington, The Wisconsin Chair Company had been manufacturing furniture— mostly rocking chairs—from about 1910. Thomas Edison's phonograph had been available to consumers since the 1880s but post-World War I saw a boom in interest largely fostered by the popularity of dance music, early jazz, and blues. Increased competition among manufacturers of phonographs made them more affordable. Radio, mainly a military-based technology through the war, was making inroads with households by 1920 and the exposure to new music was growing exponentially. It was a logical extension of the Wisconsin Chair product line, one that already included cabinets, to build versions for phonographs. Ten miles to the southwest, in Grafton, Wisconsin Chair launched Paramount Records in 1918. The 78rpm records were pressed by a subsidiary called The New York Recording Laboratories; the name may have added some panache to Paramount advertising but it was a name only. The entire operation was Wisconsin-based. Travel writer Ann Hattes, reported in American Profiles (September 16, 2007) that the shortness of Paramount's presence and its relatively small footprint in the town left the company an almost entirely forgotten part of Grafton's history.

Following Paramount's absorption of Black Swan's talent pool, the label's Race Record division took off thanks largely to a producer named J. Mayo Williams. Williams, who did not officially work for the label, was dubbed "Ink" due to his signing of the best blues talent in the country to Paramount. Ma Rainey, Blind Lemon Jefferson, Son House, and Charley Patton ("Father of the Delta Blues") came to the label through Williams' efforts. Williams also played an important role in developing advertising that targeted the black marketplace. White-owned labels with no experience selling to African American consumers sought his input in refining their message and approach for print and record store copy. Williams was a renaissance man who once made a living delivering bootleg alcohol. A graduate of Brown University, a record-holding track star, and an Army veteran, Williams had set his sights on a career in finance. Instead, he found himself as one of only three black players in the National Football League. Concurrent with his sports career, Williams became a writer for The Chicago Whip an African-American newspaper where a colleague had been a distributor for Black Swan. Williams, despite a lack of musical knowledge, saw an opportunity in the field and secured a position in sales with Paramount. Music historian Eileen Southern considered him the most significant black executive in the Jazz Age recording business; along with recruiting talent, he produced artists and recorded as a musician himself. His reputation among white sales executives was good; the same was not true with the black artists he signed to the label. Williams had adapted to the existing business model of cheating musicians out of their composing rights and royalties. He founded his own record label, Black Patti, though it quickly failed. Williams was then recruited to the Vocalion label, then an imprint of Brunswick Records, where he resumed scouting and signing black artists to the label's Race Record division.

In the five years leading to the demise of the label, Paramount became the most comprehensive source of Mississippi Delta Blues recordings. The standard practice among white-owned labels with Race Record divisions, was to distinguish the white and black recordings through a numbering system. With Paramount the "1200 Race Series" and the "20000 Popular Series" were the two designations. Ironically, ..."Popular..." became a misnomer as the Race Series far outsold the mainstream recordings, a business that ultimately failed. So too had Paramount's venture into the phonograph business; its Vista brand phonograph was launched in 1915 and folded by 1920, having little in distinctive benefits to consumers. Paramount just barely survived the competition from the larger New York labels such as Columbia Records, Victor (the Victor Talking Machine Company taken over by RCA in 1929), and Edison Records, founded by the inventor. Finally, a victim of the Great Depression, Paramount Records closed in 1932, as did Edison Records.

Vocalion Records was launched in 1916 New York by the Aeolian Piano Company. That company's claim to fame was inspiring Congress to pass The Copyright Act of 1909. Aeolian made and marketed player pianos and the piano rolls containing the programed music. That music was the work of well-known composers whom Aeolian refused to pay royalties on the basis of technicality. The Congressional legislation closed that loophole forcing Aeolian to pay royalties. Vocalion Records' line of Race Records was among the most successful. They recorded Louis Armstrong, Fletcher Henderson, Phil Harris, Earl Hines, Isham Jones and Clarence Williams, artists that recorded for multiple Race Record labels. Like most of these competing labels, Vocalion Records also manufactured and sold phonographs. In 1925 the label was acquired by Brunswick Records which was acquired by Warner Bros. in 1930. The financial stability of Warner allowed Vocalion and Brunswick to survive the Great Depression. In 1931, Warner licensed the Vocalion and Brunswick catalogs to ARC (American Record Corporation). During the late 1920s and through much of the 1930s, ARC pressed and issued records for several labels including Melotone, Oriole, Perfect, Regal and the French label Pathé. In a labyrinthine game of musical chairs, ARC was purchased by CBS in 1938 and Vocalion became a subsidiary of Columbia Records until it was discontinued in 1940 along with Brunswick. Warner Bros. bought back the defunct labels and immediately sold them to Decca while CBS retained ownership of both label's masters recorded before 1931.

Emerson Records' Race Records were different in that the numbered series were not distinguished by white and black designations. Victor Emerson had been an engineer at Columbia Records, leaving in 1914 and starting the Emerson Phonograph Company, and the record company in 1915. The label did not have the depth of talent that appeared on some competing labels but they recorded some popular black blues and jazz artists such as Eubie Blake, Wilbur Sweatman, Hazel Meyers, Eddie Cantor, and, again, Fletcher Henderson. In an advertisement in the May 10, 1924, Chicago Defender the label claims "Over One-Hundred-Million Records Have Been Sold." That same year, Emerson's Race Records went out of business and all recording ceased in 1928. The Emerson brand lived on, reincarnated as a radio manufacturer.

Dozens of smaller Race Record labels have been forgotten to history. Metal masters were often sold for scrap, even with the larger labels trying to liquidate assets in the face of the Great Depression. Among those largely forgotten labels was Herwin Records which issued budget jazz and blues records, only through mail-order, and Bluebird Records, also known for bargain-priced jazz and blues. Pathé Records marketed its low-cost 78s through Perfect Records, beginning in 1922. Regal Zonophone Records was a UK-based label that distributed Okeh, Victor, and Columbia Records, in Europe, and also produced local artists. Founded in 1896, Parlophone Records is a German-British joint venture that remains in business as a division of the Universal Music Group. Its UK branch produced jazz Race Records in the 1920s.

For the labels that survived in some form, broad national recognition didn't come until 1942 when Billboard published its Harlem Hit Parade chart. In 1945 they renamed the list as the Race Records chart and retained that list until June 1949, when, at the urging of the publication's journalist Jerry Wexler, the magazine changed the name to Rhythm & Blues Records. Wexler felt that "Race Records" was no longer appropriate for the times. The R&B chart lasted for twenty years when it was changed to "Soul" and then in 1982, to the "Black Chart." There were a few Race Record labels that formed after the genre had passed its prime. Chicago's Miracle Records was established in 1946 but folded in the early 1950s. The Los Angeles label, Supreme Records was started in 1947 to issue Race Records. Its roster included some top talent but legal issues forced the label to close in 1950. 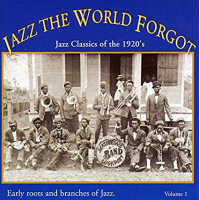 Bennie Moten, Jelly Roll Morton, and King Oliver share space on a twenty-three-track collection that includes almost forgotten names such as Sam Morgan's Jazz Band, The Pickett-Parham Apollo Syncopators and Frenchy's String Band. The Hot Jazz of Jazz the World Forgot, Vol. 1 is somewhat indistinguishable from one piece to another but the quality of the playing is impressive and the audio is better than might be expected, considering sources. 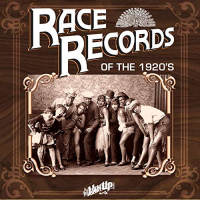 As with Jazz the World Forgot these twenty-five tracks come from some very familiar names, and some, not so much. Included in this collection are early sides from King Oliver And His Dixie Syncopators, Fletcher Henderson And His Orchestra, Clarence Williams Washboard Band, Bessie Smith, Johnny Dodds' Washboard Band, Bennie Moten's Kansas City Orchestra, Earl Hines, and McKinney's Cotton Pickers. UK label, Van Up, specializes in Dixieland and Hot Jazz from the 1920s through 1930, all in the digital format.