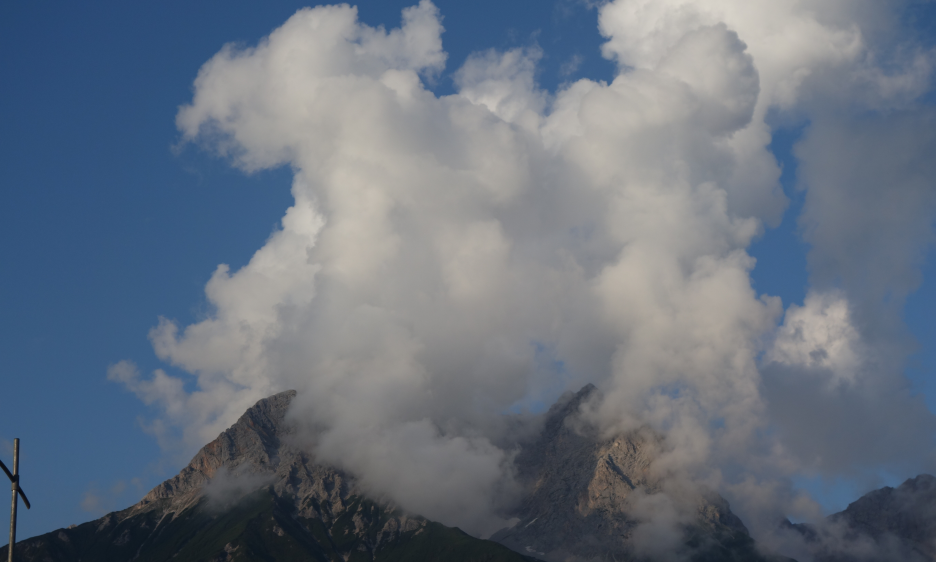 By HENNING BOLTE
October 26, 2019
Sign in to view read count
Saalfelden? For those who don't already know, it is a small Austrian town in a magnificent alpine landscape in the Pinzgau, 70 km west of Salzburg, famous for its jazz festival in August and January and popular as a vacation and sport area.

The festival has a great 40-years history having built a charisma that is so much larger than the physically small town itself. It has always been carried by an open communal attitude and broad orientation. Within that it had an ear and eye for surprising, convincing edginess from the very beginning and has always put down marks of what counts and what will be next seen all over Europe during the year ahead.

With this year's 40th edition, the festival managed to renovate and renew itself with apparent success. Thereby of course, Saalfelden is still steeped in the spirit of discovery, exploration and experimentation. The weather mostly is good and is paired with remarkable hospitality in abundance. Saalfelden no doubt has its standing as an important, outstanding case in the European festival landscape and draws visitors not only from neighboring regions in Austria, Germany, Switzerland and Italy but from the furthest reaches of Europe.

This year's 40th edition was a vital turning point with an extended approach -among others 83 concerts, 60 of them with free access -and new elements in the presentation and experiencing of music. The festival opened up to the city and its people with the free City Stage and more smaller places around the city such as bookbindery (Buchbinderei Fuchs), a bookshop, a defunct courthouse building (Bezirksgericht), a local museum and of course higher up in the coulisse of the attractive Steinernes Meer mountains (Stone Ocean).

It also entailed other dynamic approaches and ways to curate and present music igniting rich dynamics. Most significant variant were short surprise appearances of combinations of residential musicians at a great diversity of locations through town, from fast food to pharmacy especially the spontaneous mobs of the Bassmannschaft/bass-crew under renowned chief Lukas Kranzelbinder (Shake Stew, among others). This year's edition worked with two artists in residence: vocalist/flautist and electronica partisan Maja Osojnik & Band, originally from Slovenia, and drummer Lukas König of the crazy König Leopold duo with Leo Riegler and the deep digging and heavily raging Compost 3 bunch of Martin Eberle ((slide-)trumpet), Benny Omerzell (keys), Manu Mayr (bass), Lukas König (drums)). Maja Osojnik figured in three happenings: a solo called "You need me! Who else will you blame when I am gone," an exposition performance, a kind of Hörspiel with Natascha Gangl (voice+toys) and Mattija Schellander (voice, electronics, toys) called "Wendy Pferd Tod Mexico" and an appearance with Zsamm, her duo with drummer Patrick Wurzwallner annex soundwoman Christina Bauer.

Harmolodics at the Ranch

Harmolodics got its substantiation at this year's first night. It took the fest back to the 'The Ranch,' a small hidden backyard garden in town, also called 'Der Stall,' from where it once took its course with 12 concerts in three days. Here, in the dim light of the garden, young generation Sketchbook Quartet made its appearance on a small wooden stillage stage followed by Fulsome X, a group of saxophonist/flautist Wolfgang Puschnig, the most Saalfelden-featured musician. While first the Sketchbook troupe jumped its original, stimulating way through Dolpy-esque, rock and reggae reminiscences, Puschnig immediately roe the attention of the big garden trees by a unique asymmetrical, edgy version of harmolodics. He had to do it without his old partner in crime, master Jamaladeen Tacuma, who couldn't make it. He brought in another ace instead, guitarist Rick Iannacone. Iannacone sounds like no other guitarist. Not having heard him before, I wasutterly fascinated and stunned. Their collaboration dates back to the days of the of the Korean Samul Nori ensemble of percussionist Kim Duk Soo from the first half of the 90s (see the ECM-album Then Comes The White Tiger produced by Steve Lake). The group was completed by Jon Sass on tuba, Asja Valcic on cello and Reinhardt Winkler on drums. It became an inciting lead-in.

The opening of the shortcuts series Thursday night offered a remarkable difference of radicals. Many festivals wouldn't dare to program this and if ever then not together. Saalfelden is Saalfelden, and thus it is done and happens. Anthony Coleman/Studio Dan Pianist Anthony Coleman, one of the pioneering musicians of New York's downtown scene and having a prolific career as composer too, is a traversing and transcending artist. Known for unparalleled explorations and elaborations of the work of Jelly Roll Morton, he is a passionate teacher of composition at New England Conservatory (NEC) in Boston. As part of its 150th anniversary celebration in 2018, NEC commissioned Anthony Coleman to compose a large-scale work. In Saalfelden, Coleman performed compositions he wrote for the Vienna nine-piece ensemble Studio Dan, a world premiere. Anthony Coleman is a traversing and transcending artist, especially interested in certain in-between areas, moving between built form and found form/happening shapes, between "rock and rant" as he himself expresses it. Studio Dan is an ensemble acting in a field between new music and improvisation comprising Daniel Riegler (trombone), Sophia Goidinger-Koch (violin), Maiken Beer (cello), Doris Nicoletti (flute), Clemens Salesny (saxophone, clarinet), Dominik Fuss (trumpet), Michael Tiefenbacher (piano), Philipp Kienberger (bass) and Mathias Koch (drums). The Coleman commission continues a series that began with Elliott Shar and George Lewis. The music was a wondrous, fascinating and bewildering listening puzzle with pieces called "Rotschal," "Echo vom Berg," "Osslips" or "Freudian Heat." Proceeding in curious, unlikely steps, sequences slipped away, motifs broke off and resurfaced at surprising moments. Expressionistic tinged shreds flared up and it had the feel of motionless motion at times, or sounded blurry, somnambulistic. Nonetheless it owned a strong, vivid signature. For me it also triggered thoughts of the music of Stefan Wolpe or Christian Wolff It was an uncommon, arresting and precious experience for a jazz festival. A video registration can be found here.

Julien Desprez, one of the central musicians, was involved in three configurations: in Abacaxi, in Mopcut with Austrian drummer Lukas König and US-American vocalist/cellist Audrey Chen, a Berlin resident, and in T(r)opic, that he co-leads with US-American trumpeter Rob Mazurek. T(r)opic is a nine-piece large ensemble comprising trumpeter Susana Santos Silva, saxophonists Lotte Anker and Mette Rasmussen, vocalist Isabel Sörling, bassist Ingebrigt Håker Flaten, percussionist Mauricio Takara and drummer Gerald Cleaver—a colorful troupe from across the world: Portugal, France, Denmark, Norway, Sweden, Brazil and the US. That Desprez is a well-connected significant musician should be clearly evident from these parts of his work field. He has strong ties at home in France and in the Berlin scene, as well as in Scandinavia, Portugal, Brazil and the US.

Desprez' music is radically condensed, sharp-edged and materialized. Influences you rather feel than you can identify solely by ear. His music sounds just like the moves, kicks, strikes and hitting of karate fights look. It goes with sudden break offs and a delayed and then accelerated cumulative explosiveness -a kind of shorthand with strong inner rhythm. The sound attacks are driven by a cutting-edge syntax chiseling into the airy space.

Experiencing Desprez's music live is a mesmerizing affair with a mind cleansing, purifying effect. There is no redundancy, no posing, no hyper-expressiveness, no lingering or wandering away. It is not just loud, terrifying, far out for its own sake. It feels incisive with a reason, a reason that can be sensed clearly as a gesture but cannot be put in words. Jimi Hendrix in his time made use of only very few pedals, wah-wah, fuzz, univibe, while presently guitarists surround themselves with an extended battery of pedals. Desprez breaks through this armed tableau and blows it up. By tapping the pedals, positioned in a half circle, percussively in increasing tempo, he starts to dance, the speedy pedal dance evoking flashing up roars, then explosive sound strikes.

Austrian drummer Lukas König was one of the most visible and energetic musicians. He played with Shazad Ismaily, Briggan Krauss, Petter Eldh, Otis Sandsjö and Leo Riegler. König is an important voice of the Austrian scene and a well-connected significant musician internationally. As part of the Short Cut series he played on Saturday with his group Mopcut under the heading 'Accelerate Frames of Reference,' a trio comprising US-American cellist/vocalist Audrey Chen and, not unexpected, French guitarist Julien Desprez. König adds up, accelerates, König crashes things under, buries them, sparks a Luciferian fire, gets almost lost in noise realms where the conjured spirits appear in the dense haze -moltiplicatore di velocità moltiplicatore infernale. The performance of these three raging musicians was permanently balancing on the cutting edge.

Animals can be great inspirators for music making, and it can make a difference taking a a triggering context and frame from real life to feed our imagination. Eartha Kitt was one of the first to adopt the cat image to emphasize and project her singing. Many followed her. Cats' movements and voices not only speak strongly to our imagination but also to our feelings and empathy. That is the imaginational space where MeoW, a multinational team from Berlin, vocalist Ayse Cansu Tanrikulu, keyboardist Liz Kosack, electric basisst Dan Peter Sundland and drummer Jim Black, gave shape through sounds of cat attacks, the hisses, spits, shrieks and laments. Once let go, the music exploded and freely and highly expressively, squirmed in all corners. Jim Black is completely in his element, Ayse Cansu Tanrikulu is an amazingly outgoing and catchy vocalist and both trigger, stimulate and incite each other. Dan Peter Sundland is the Oscar Wildeian cat lover and mysteriously masked Liz Kosack is the janitor of the cat empire. It was the greatest musical fun I have experienced in years.