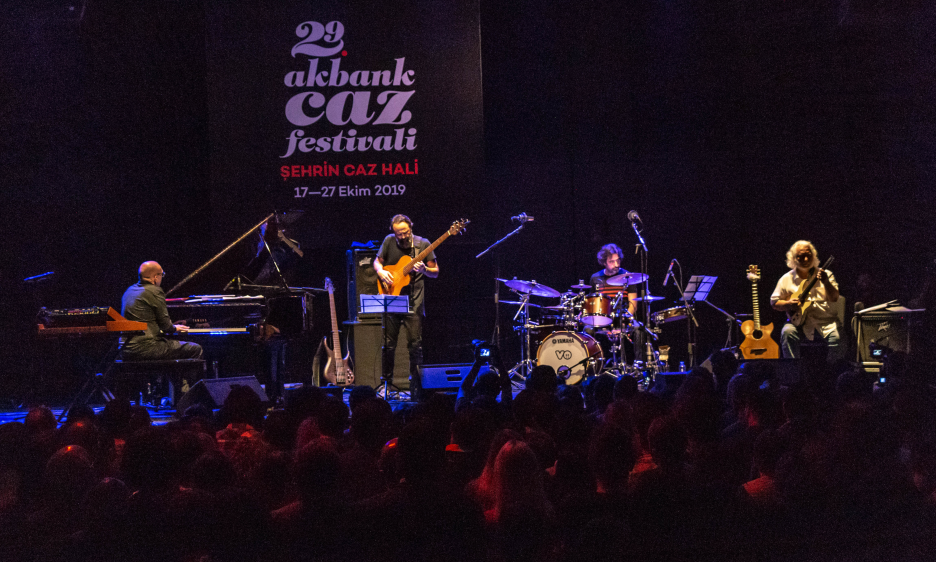 I arrived in Istanbul during the world-wide outrage that followed the United States pull-out from Syria and the consequent military intervention by Turkey. The new humongous airport looked rather empty compared to the crowded spaces of the old one; the trip to city centre was long in kilometres but on a rather free road, and the light traffic made for a transfer that was not longer than before. Despite the huge Kurdish population, the city seemed calm, at least on the surface: tourists and local shoppers everywhere, with a preponderance of rich Russians and Middle-Easterners, but with Erasmus students from all over Europe having fun in coffee and narghile bars. In the car from the airport I learned the Art Ensemble of Chicago decided to cancel the concert, in protest against the military operation, I read later; the festival took the decision in its stride, and later a Kurdish friend commented "the only people who were bitterly disappointed were those who wanted to hear the band, and none of them supports the government." For clarity, the Istanbul Akbank festival was promoted by Pozitif, the organization which brought a stable international jazz festival in Turkey in 1991 creating unforgettable events like the Sun Ra parade in Istiklal Caddesi, backed by the major bank AkBank— hence the name. Its relationships with local and national governments have been at best distant, and no public, much less governmental, funds ever supported it, so the idea that the cancellation of the concert could be interpreted as an oppositional political act by the Turkish audience lacked any factual base.

Under the "eternal" veneer, useful to bring tourism to the Ottoman and Byzantine monuments increasingly used as selfie background, the city was ongoing profound renovations, as always. Part of the Bosphorus coast obscured by cranes building the Galataport development project; debate about the future usage of the two historical railway stations, one on the Asian and one on the European side; the mental geography of the city transformed by the new Marmaray tunnel, connecting undersea the two sides of Istanbul, Asia and Europe. From Uskudar to Sirkeci it became a few minutes quick and comfortable trip—less romantic than the ferry, but for a commuter, a major improvement. The impact of the new mayor—after many years the ruling AKP party lost the local election and now a man coming from the opposition ranks is governing the city—has been felt, but any major change in a centuries old metropolis of more than 15 millions people will come slowly. Keeping the metro open 24 hours a day on weekends, one of his first actions, has been widely approved, and talks with different cultural promoters confirm that the municipality is giving due attention to cultural events.

The cancellation of the Art Ensemble concert brought me to a newish venue in the area of Beyoğlu—a few steps from the Gezi Park that became famous five years ago for the protests that took place there against a development project. A giant mosque still in construction dominated Taksim, the square near to Gezi, a deeply symbolic act after the Ataturk Cultural Centre was torn down. After the Gezi protest most of the cultural scene and live music venues moved to the Asian side in Kadikoy, but this new venue—called Bova—maybe signaled that the neighborhood might be able to sustain a jazz scene again. The concert there was part of the AkBank Festival program and provided a pleasant surprise. Called B'r Şeyler Eks'k (could be translated in Someth'ng M'ss'ng) the group featured magnetic vocalist/performer Çağıl Kaya with a sax section (Serhan Erkol and Tamer Temel), Alper Yilmaz on electric bass and ever reliable Volkan Oktem on drums. Kaya rapped like a machine gun on top of fat grooves laid down by bass and drums, while saxophones commented with riffs and solos; original songs tackled current issues and the only direct "jazz" reference was a drawn-out, for-out version of "Night and Day" whose verse lended itself to such treatment. An electrifying evening and a strongly recommended band. After the concert I met the owners, a young couple with a Turkish husband and a wife from ...Naples, Italy! The place was called Bova from a remote village in Calabria. A hip place to visit for a beer, chat and excellent music in the middle of the mayhem of Mis Sokak, a side street of Istiklal Caddesi, Beyoğlu's main drag.

Symptom of the changes in Beyoğlu was also the move of Babylon, the hippest club of the 90s, to a new location in Bomonti, where an ancient beer distillery has been transformed into a high class entertainment hub. Certainly a cool place, but more upscale and without the daring innovation of the 90s. The occasion to visit the new Babylon was the memorial concert for co-founder Mehmet Uluğ, prematurely passed away 4 years ago. The evening featured Turkish musicians: trumpeter Imer Demirer—the still undiscovered gem of Turkish jazz—with his IMC Trio, including Volkan Topakoğlu on bass and Can Kozlu on drums; P.D.K. Trio, with Ali Perret on piano, Meriç Demirkol on saxophone and Şenol Küçükyıldırım on drums, and piano master Aydin Esen. The music moved between spacious improvisations and groovy rhythms, with a final, spontaneous and collective celebration that was a fitting tribute to Memo's vision by his friends.

The following day the festival moved to a performance center attached to a huge mall—not my favorite venue—for a concert of the James Carter Organ Trio. The concert did not do it for me. No question about the stratospheric command of the instrument by Mr. Carter, who prayed the gospel of Illinois Jacquet, Earl Bostic and Louis Jordan, adding several volumes of his own including John Coltrane and even Evan Parker. But the evening, based on "updated" versions of tunes associated with Django Reinhardt, and MC'ed with great showmanship by Mr. Carter himself, was finally for me univolving, lacking in emotional content, rarely managed to get a groove going despite the technical fireworks, and also was so loud to be positively painful. One man's opinion.

In the same venue, Jakob Bro Trio was about the opposite. Minimalist sound gestures, extended meditation over a simple melodic movement, the Danish guitar leaving ample liberties to his regular contributors Thomas Morgan on bass and Joey Baron on drums. (I confess that I could listen to the kaleidoscopic drums of Joey Baron for a whole concert without difficulty). They seemed to play almost without amplification, and I wondered if they traveled with their sound engineer, so transparent was the sound in the same hall where I felt aggressed by volume of the James Carter Organ trio. A masterful concert, stopping time to the point that after an initial period of getting used to the logic of the music I felt shocked when they finished, since it seemed just a few minutes long. Despite knowing the recordings, the live experience was on a totally different level.

No other artist followed the ill-advised choice of the Art Ensemble, and so the old and elegant Cemal Resit Rey concert hall, a classic Istanbul venue where often one can hear Classical Turkish Music on Sundays, welcomed Charles Lloyd, very popular in the city where he performed many times since the '60s. I had the privilege of a long chat with Charles in his hotel room overlooking the new Babylon, hearing stories about childhood friend Harold Mabern and endless others (he drops bombs like "when I was in High School Jimmie Lunceford came to establish a music program"), discussing the local political situation that he knows well through many friends, and listening together to last year's live recordings of his most recent Kindred Spirits band. This was a mixed blessing however. The Middelheim radio recording that we listened to struck me as very strong, innovative, with a newly re-found blues streak and winning melodic ideas. Each piece seemed to imply a tribute to a different genre of African diaspora music. That band included luminaries like Eric Harland on drums and Reuben Rogers on bass, while in Istanbul we were treated by the Trio with Lloyd, Marvin Sewell on guitar and Gerald Clayton on piano. I enjoyed the concert immensely. Hearing Lloyd's instrumental voice is a transforming experience, Sewell is a perfect addition to Lloyd's concept with his mixture of hard blues and experimentation—he honed his skills with the likes of Von Freeman, Jack DeJohnette, Fred Hopkins and Cassandra Wilson among others—while Clayton's piano, hard, cutting, transparent like a diamond, moved elegantly from a tasteful, sparse accompaniment to intense, breathtaking solos. At the same time, after hearing the live tape, I felt that bass and drums are needed for the perfect realization of Lloyd's concept for this band, and I wished I were able to see the full quintet in the following concerts of the tour.

Oh well we cannot have everything, and there was still the final concert with a first time meeting of Erkan Oğur, the guitarist and kopuz player who revolutionized both folk and jazz music in Turkey, with Norwegian keyboardist Bugge Wesseltoft, whose New Conception of Jazz in turn revitalized European jazz since the mid-'90s. The concert took place in Moda, on the Asian side, and getting there involved a pleasant ferry trip, a walk through a bustling market, browsing in the best used records shops, and a dinner at Ciya, the Anatolian-style restaurant who introduced the slow-food movement to Turkey sparkling hundreds of imitations. A young, focused crowd filled to capacity the spacious Moda theatre for the occasion. Bugge has been admiring Erkan for a long time but the meeting actually took place thanks to the efforts of electric bass wizard Alp Ersonmez, while the group was again rounded—and grounded—by Volkan Oktem infallible drums. Tentative at first, the musical dialogue developed slowly but in several moments attained a peak of expressive strength revealing its potential. The project needs work and I do hope that Wesseltoft can apply his producer's skills to it.

All in all a fitting conclusion to my stay in the city for a successful 29th AkBank Jazz Festival—looking forward to the celebrations for the 30th!