Charlton Singleton At The Jazz Corner 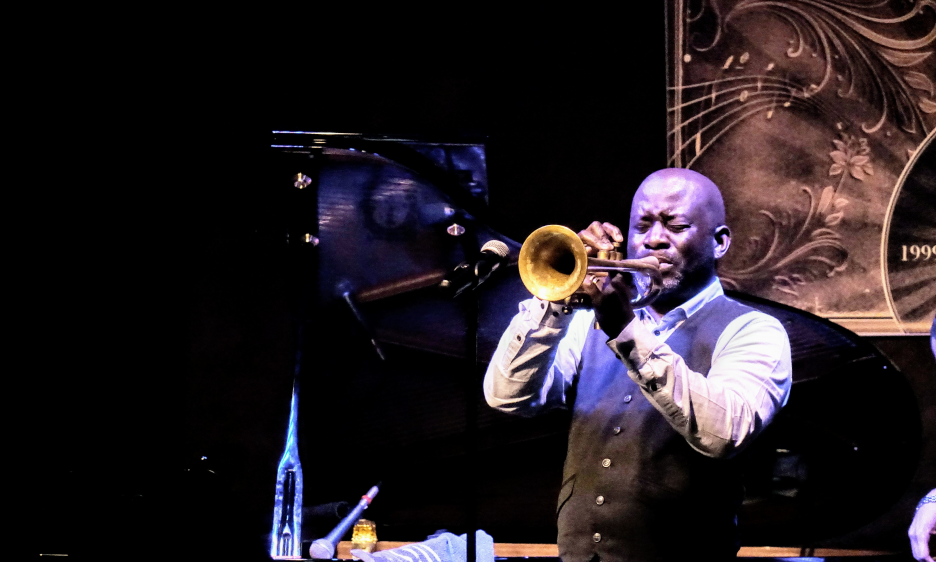 It was Sunday. Charlton Singleton played the organ for the morning congregation at his church in Charleston, South Carolina. Then he drove with his quartet a hundred miles south through the Carolina Lowcountry to play trumpet on the sea island of Hilton Head. His day was a parody of the musical journey of Soul, which started from church gospel, added jazz, then rhythm & blues.

The quartet began with a traditional New Orleans jazz tune "Whoopin' Blues." It was followed by "What You won't Do for Love" by Bobby Caldwell, which slid into Grover Washington, Jr.'s "Just the two of us." Bill Withers collaborated on that number and also wrote the next piece, "Ain't no Sunshine Anymore."Singleton sang well to rim and hi-hat taps from Robert Saunders on drums and soft R&B piano from Demetrius Doctor.

Singleton's trumpet shone in Miles Davis' "All Blues," which was given an electric bass intro by Kenny Sharder. Saunder's dramatic drum roll led them into James Brown's "It's a Man's, Man's, Man's World," which has a condescendingly chauvinistic lyric even by 1966 standards, but remains a powerful piece of music. Next came the Earth, Wind & Fire 1975 song "Can't Hide Love."

Singleton plays a Jason Harrelson trumpet with a dark rounded tone. Harrelson is a small shop in Denver, Colorado, which hand-builds two trumpets a week. The design and the patina on the gold finish gave it the look of an old Monette. In reality, it was built in 2017.

As a young student, Singleton was returning from playing Edinburgh's Fringe Festival in Scotland when he met Dizzy Gillespie at a newsstand in JFK airport. Gillespie was carrying an oddly shaped instrument bag uniquely made for his Martin Committee trumpet with its upturned bell. Pushed forward by his bandmates, Singleton blurted out a rapid-fire introduction stopped by Dizzy asking, "Can you play as fast as you talk?" A mentoring session and trumpet talk followed. Twenty years later, at a Jazz festival in South Carolina, Gillespie's niece invited Singleton to play that same trumpet. It was still in its individual bag. He lightly oiled the valves, and it played "smooth as driving a Rolls" and had him screaming high notes way beyond his usual register.

Touched by history, they moved on to a George Duke composition, "You touch my Brain." Like Duke, multi-instrumentalist Charlton Singleton is not bound by genre, condition, or lyric but searches out good music, which he plays exquisitely with deep and studied understanding.