By Rob Rosenblum
October 29, 2019
Sign in to view read count 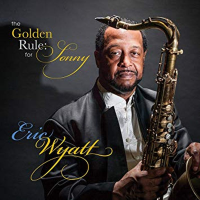 The Golden Rule: For Sonny sounds at times like a Sonny Rollins cover, especially on those tunes where Rollins' nephew and frequent sideman, trombonist Clifton Anderson, joins the front line, but a second listen shows that there is a lot more than slavish idolatry here.

Wyatt is a talented young tenor player, whose admiration for Rollins is not only reflected in this album's title, but on some of the selections on the album and his phrasing. But Wyatt does manage to distinguish himself with some solid solos.

Rollins' playing went through several metamorphoses over the years, and Wyatt's playing indicates an influence of Rollins's final decade or so of playing (the tenor great has since retired due to a chronic illness). Wyatt, like Rollins, balances out hard, staccato phrases with long, rapid fire, slurry lines much like his master. Some of his best Rollins-like performances are on the medium tempo "If Ever I Would Leave You," "Grand Street" (a rollicking Rollins classic), and "Don't Stop The Carnival," a calypso that sounds very close to Rollins' own version with Anderson, who joins Wyatt in this freewheeling romp.

While there is no denying Rollins' imprint on Wyatt, there is another side to his artistry. His ballad playing, ironically, shows a lot more of the somber intensity of John Coltrane. "What The World Needs Now" is the best example of this, and Wyatt squeezes out as much passion as could possibly be gotten from this oft-played ballad. There is also a nice solo contributed by pianist Anthony Wonsey, who quietly displays both warmth and technical agility.

There are a few guest appearances by such artists as tenor saxophonist J.D. Allen on the Rollins classic "The Bridge," and guitarist Russell Malone on "If Ever" and "Bud Powell"—a tribute to Chick Corea's tribute to bop pianist Bud Powell.

Wyatt has surrounded himself with solid accompanists and has chosen a unique array of melodies to create a first rate jazz album.

The Golden Rule; What The World Needs Now; Grand Street; If Ever I Would Leave You; Bud Powell; Don't Stop the Carnival; After The Morning; Best Wishes; In The Spirit of Arthur; Nubia; Azalea; The Bridge