11
Article: From Far and Wide

The clarinet, foundational for jazz from Sidney Bechet unto Eric Dolphy, remains in strong use in the indigenous Roma music of the eastern Mediterranean. Elsewhere in the world clarinet generally has been moved aside by saxophone's bigger sound. But in the Balkans, Greece, and Turkey, clarinet provides jazz shadings to traditional music, speaks a range of ...

The child of former slaves, Frederick Bruce Thomas' New York Times obituary called him “the sultan of jazz," for the jazz palace he founded in Constantinople (now jny: Istanbul) after World War I, a jazz borderland beyond even the music's early jny: Paris outpost. He was hosting bands in Constantinople in 1921 even before Louis Armstrong ...

Onur Aymergen started playing classical guitar with Özhan Gölebatmaz and studied classical flamenco with Suat Demirkıran, then interested in rock, funk and jazz music. He played his own compositions in many festivals and music clubs with his quartet and took part in projects with European musicians. In his jazz projects, he reflected the sounds of European jazz, modern jazz and world music. Afterwards, Aymergen worked with Mısırlı Ahmet for several years and tried to develop his rhythmic ideas. He worked a variety of styles including Turkish, Indian and jazz music. He recently wrote his thesis on Turkish Maqam Harmonisation with Prof 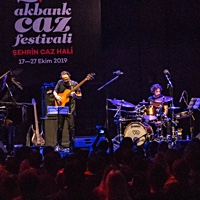 AkBank Jazz Festival Istanbul, Turkey October 18-25 2019 I arrived in Istanbul during the world-wide outrage that followed the United States pull-out from Syria and the consequent military intervention by Turkey. The new humongous airport looked rather empty compared to the crowded spaces of the old one; the trip to ...

Istanbulite bassist, composer and educator Volkan Topakoğlu made his debut with his album ‘Birdenbire’. Playing the keyboard and the guitar by ten, Volkan started his formal education in music studying cello and piano at Avni Akyol High School of Music and Arts in Istanbul. At fourteen he was influenced by his bass guitarist brother and started to listen to jazz records and play the bass guitar. He continued his education in music at Yıldız Technical University in Istanbul, studying electric bass and double bass with Kâmil Erdem. After graduation Volkan attended private lessons and workshops of bassists Jacek Meira-Niedziela, Bronislaw Suchanek, Drew Gress, Carlo DeRosa

Organised by the Istanbul Foundation for Culture and Arts (İKSV) and sponsored by Garanti Bank, the Istanbul Jazz Festival celebrates its 25th anniversary in 2018. The festival will once again host leading names and new discoveries from the world of jazz, as well as the stars of contemporary music between 26 June and 17 July 2018. ...

Erkan Sönmez, musician, born in 1989. He is interested with music since he was 14. He is graduated in the department of drum from Modern Music Academy. He is also playing piano, guitar and bass guitar beside his main instrument drum. In his musical journey, which goes through from thrash metal to jazz, he had the chance to play with many bands and musicians in stage and studio both as a musician and as an arranger. Recently, he has been playing with Erdem Sökmen Quartet and also he shares the stage with Levent Yüksel and Grup Vitamin. In this period, in which everybody creates his own music and universe, he is planning to record and produce his instrumental LP which emerges without locking on the corners of genres at the end of 2018, which consist of his own compositions. He took part in big halls like Cemil Topuzlu Theatre, Bostancı Performance Hall, Zorlu PSM, also he participated in many different kind of stages and festivals 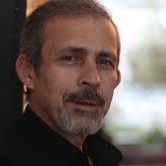 As far as I can see only Turkish media published news about the loss of Turkish pianist and trombonist Elvan Aracı, 66, in Stockholm. From 1977 to 1999 Aracı lived in Sweden where he notably collaborated with Muvaffak `Maffy` Falay, Okay Temiz and Bernt Rosengren, notably in Maffy Falay's sextet with Rosengren, Åke Johansson on piano, ...