By KARL ACKERMANN
October 30, 2019
Sign in to view read count 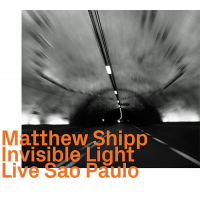 Matthew Shipp's playing has become so distinct over the years that it is difficult to view him from the perspective of influences. There are numerous examples of the virtuoso pianist-composer channeling Cecil Taylor, Andrew Hill, Thelonious Monk or even Morton Feldman, but not through imitation. Nor is his own identifiable style so tangible that his music loses any spontaneity. Invisible Light -Live São Paulo is among the finest of Shipp's solo projects, reflecting the best of what he has cultivated and conceived over three decades and hundreds of recordings.

Recorded live at the Factory Festival in 2016, the album opens with "Symbol Systems," the title track of his 1996 solo album (No More) and later recorded on Solo: The Jazz Sessions (Original Spin Records, 2012). As multifaceted as the two previous versions, this one has Shipp slowing the melodic passages at points, making them stand apart and adding a new dimension. "Whole Movement" was originally titled "Wholetone" and appeared on Art of the Improviser (Thirsty Ear, 2011). Here again, Shipp plays with the complex piece to shift emphasis by altering tempo and dynamics, giving the tune a fresh feel. "Blue In Orion," from One (Thirsty Ear, 2005) is extended almost ten minutes beyond the original. Pressure and muffled absolution are amplified throughout the nuevo-classical influences.

Shipp takes on several classics on Invisible Light -Live São Paulo; "Angel Eyes," "On Green Dolphin Street," "There Will Never Be Another You," and "Yesterdays," were previously covered on his solo release Songs (Splasc(h) Records, 2015); "Summertime" appeared on Shipp's I've Been to Many Places (Thirsty Ear, 2015). In his singular approach, he sets new standards rather than simply reinterpreting old ones.

Shipp's ability to embrace a melody, take it to a flashpoint, and return it somewhat intact, is exceptional. His interpretations of otherwise familiar tunes are saturated with remarkable harmonies, enthusiastic freedom and elegance; they become curious sequels. Gunther Schuller wrote: "It is a global concept which allows the world's musics—written, improvised, handed-down, traditional, experimental—to come together, to learn from one another, to reflect human diversity and pluralism." This is the space from which Matthew Shipp creates; it enriches us all. Highly recommended.