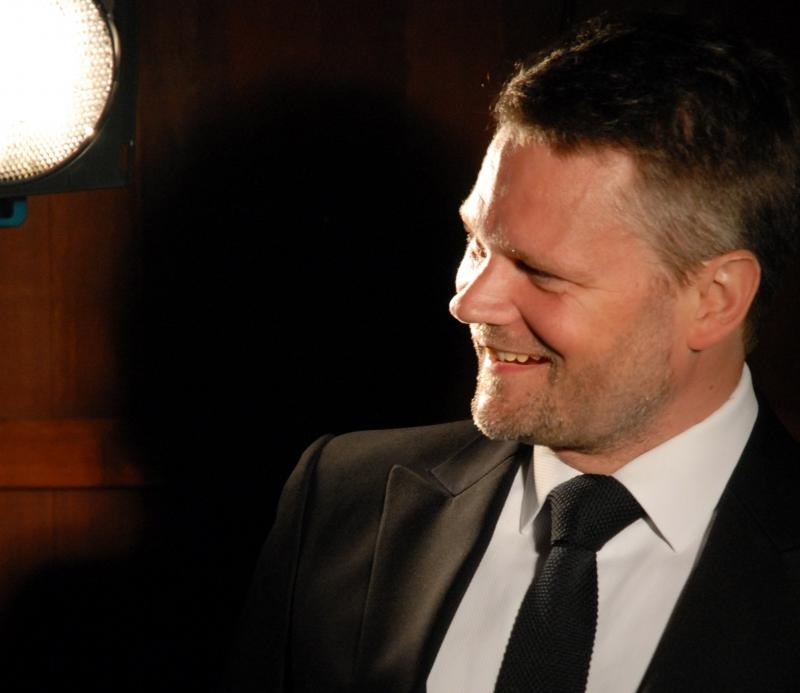 BY DAVID TUGHAN
January 18, 2014
Sign in to view read count
Meet David Tughan:
I was born and raised in Northern Ireland. My passion for jazz began at 13 when I encountered the Count Basie Orchestra while vacationing in Florida. Inspired by the swinging energy and joyful sounds of the big band, I began listening to many instrumentalists like Oscar Peterson, Stan Getz, Stephane Grappelli, and singers like Nat King Cole, Chet Baker, and Mel Torme.

Currently, alongside working with my quintet in clubs and festivals in UK and Ireland, I have sung with big bands like NYJO, Skelton Skinners All-stars, the RTE Concert Orchestra, and Grammy-Award nominee John Wilson and his Orchestra.

Teachers and/or influences?
Although I'm largely self-taught, my background in theater has shaped my singing voice through roles from Shakespeare to Saucy Jack And the Space Vixens.

I would say that I'm influenced as much by instrumentalist as I am by singers. Growing up, I tried to listen to all the major instrumentalist from Jelly Roll Morton, Keith Jarrett, Bix Beiderbecke, Wynton Marsalis, Lester Young, to Joshua Redman. I particularly like Chet Baker's trumpet improvisations; I find them to be very lyrical. Baker's scatting was also a big influence to me.

I knew I wanted to be a musician when...
I first sang in a jazz club. I asked the house band at Alexander's Jazz Theater in Chester if I could sing a number with them back in 1992. I sing "It Had To Be You" and after that they asked me to do another one. After that night I began to sing every week as their guest singer. I remember thinking, "This is so much fun! I love it!"

Your sound and approach to music:
Miles Davis once said, "Sometimes you have to play a long time to be able to play like yourself." I think that's very true in my case. I've spent a lot of time trying to find out what my real voice and my natural sound are. When I was starting out as a singer, I was listening to a lot of singers and trying to sound like them because I admired them and loved their style and sound. I used to mimic them in a lot of ways but it just didn't' feel right. I think that over the years I have taken a little part of the singers that I have loved and have influenced me in the past like Nat Cole, Vic Damone, and Matt Monro and tried to integrate it into my own sound. I'm not there yet, but I feel like I'm getting to sound more like myself as I get older.

Your teaching approach:
I'm not a teacher, but if I were, I would emphasize playfulness and fun during lessons. I would encourage risk taking and trying to make sure that making music is a pleasure. Creativity thrives in environments that are fun and non-judgmental. I hear so many people say that they regret that they hadn't learned an instrument or kept up with their piano lessons. I think a lot of kids put off playing music because lessons weren't fun. Music is not a function of the intellect. So often it is taught in a dry and abstract way that puts kids off.

Your dream band:
I have to say that I have two bands that I worked with on Just In Time (OT, 2003) and Builders Brew (OT, 2005) were a pleasure to work with. If I were to record and performer again with a new dream band, I would include Martin Taylor on guitar, Eli Degibri on sax, Chris Higginbottom on drums, Keith Jarrett on piano, and Dave Chamberlin on bass.

Road story: Your best or worst experience:
When I was working as an actor, I did a show playing Frank Sinatra along side Nat Cole and Bing Crosby. One day, the actor playing Bing was too ill to do the show. Instead of cancelling the show, we were told that we would have to continue without him. It took us seven hours to get to the venue because of problems on the road. By the time we arrived the audience had already sat down in auditorium and the theater held the curtain for an extra 10 minutes so we could put our tuxedos on. Without any rehearsal, we went straight on stage and managed to do the entire show while missing one third of the cast! It was more Morecambe and Wise than Frank and Nat, but somehow we got through it. It was shaping up to be the worst experience, but in the end we did a good job under the circumstances and the audience loved it. As they say, the show must go on.

Favorite venue:
I did a jazz show about the life of Lord Buckley at the 59 E 59th St. Theater in New York and it was a lovely place to play. The executive producer at the theater, Peter Tear, was such a lovely, funny, and encouraging man. He was always buying us drinks after the show and was so supportive of the show. We had such a great time.

Your favorite recording in your discography and why?
"The Night We Called it A Day" on Just In Time. I love the title and Simon Colam's piano playing is sublime, a real dream for any singer.

The first Jazz album I bought was:
I don't quite remember but I was obsessed by Oscar Peterson so it was probably one of his many recordings. I remember my father had a copy of The Magic Touch (Riverside, 1962) in his collection and I that was the first proper jazz recording I heard.

What do you think is the most important thing you are contributing musically?
I'm not sure yet, but it will definitely be on the next album!

Did you know...
I do impressions.

How would you describe the state of jazz today?
With the popularity of singers like Jamie Cullum and Michael Buble, I think there is a small renaissance going on that is attracting a younger audience to the fold. Also the popularity of the Rat Pack era has spawned many a tribute acts and revived people's interest in this kind of music. Hopefully many more young people will discover this great music and have it be part of their life weather they choose to play an instrument or enjoy listening to it.

What are some of the essential requirements to keep jazz alive and growing?
I fell in love with jazz because I was exposed to it and I had the opportunity to see it live. It's essential that schools and parents give kids the opportunity to hear the music. The rest, I believe, should take care of itself

What is in the near future?
I have a new website and after having a break from making music I hope to make a new recording in 2014.

What's your greatest fear when you perform?
Speaking to the audience in between songs.

What song would you like played at your funeral?
"Let The Good Times Roll."

What is your favorite song to whistle or sing in the shower?
"Somewhere."

If I weren't a jazz musician, I would be a:
An actor.