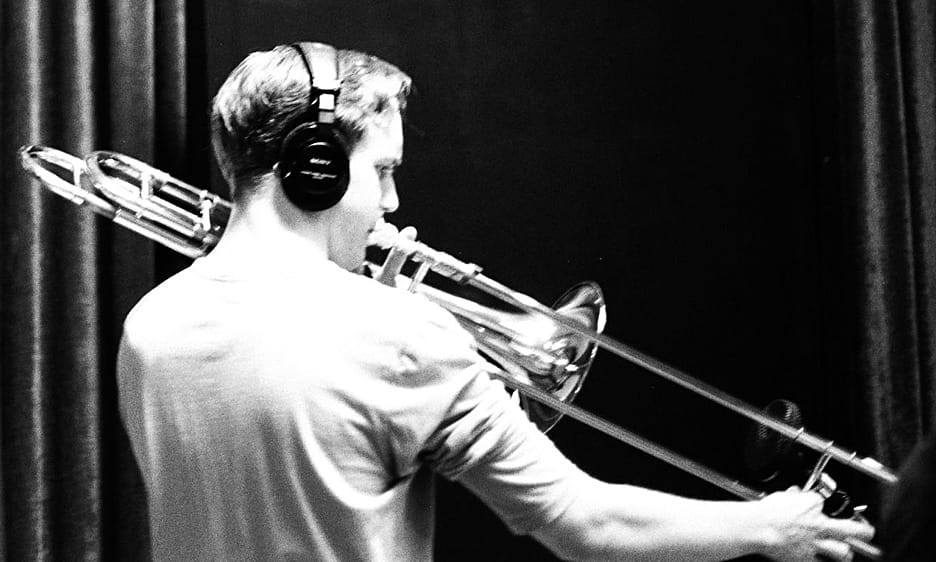 By ANDY CLAUSEN
February 26, 2020
Sign in to view read count

He will be conducting the New York Youth Symphony Jazz Band at Dizzy's Club at Jazz at Lincoln Center on Monday, March 9, 2020, featuring saxophonist Steve Wilson, celebrating the centennial of Charlie Parker.

By early high school I knew music was IT. I couldn't imagine spending my life doing anything else.

I've always gravitated towards music driven by a strong sense of melody and I think my approach to composition, improvisation, and bandleading reflects that interest. As a trombonist, I don't have the virtuosic technical abilities of a lot of other instruments, so I also place a lot of emphasis on sound quality, timbre, and feeling. Coincidentally, I think listeners relate to that stuff a lot more than super virtuosic, technical wizardry.

My goal as an educator is to empower and inspire students with the passion and curiosity to pour themselves into the music. That love and passion for the music is the most powerful force a student can possess, and will serve them much more in the long run than any specific lessons I can offer. That being said, I love sharing my passion for Jazz and Improvised music with students, discussing and dissecting why pieces work the way they do, understanding the historical, stylistic, cultural, and political intricacies of the repertoire we are studying

I had food poisoning when doing an NPR Tiny Desk Concert. That was both a high and low point! I had eaten a Quizno's steakhouse beef dip from a rest stop in NJ on the drive down the day before (Should have known better!) It hit me around midnight, and I was up all night in a single hotel room with my bandmates. At 10 am we had to get in the car to head to NPR headquarters so they tossed me in, about halfway there, I had to run out of the car into a gas station bathroom. I ran past the attendant (who was apparently waving his arms) and then got locked in the bathroom. The attendant had been trying to tell me the bathroom door was broken! 20 minutes later I was still stuck in there, and had left my phone in the car. The attendant finally had to bust open the door with a body slam, and I came out of the station and my bandmates were freaking out that we were gonna be late, but we made it, and you can see the evidence online. By some miracle, I made it through the 15-minute performance unscathed, but the Quiznos kept wreaking havoc all day. Lesson learned.

So many of all shapes and sizes! In New York—Roulette, National Sawdust, Village Vanguard, Threes Brewing, The Owl Music Parlor. Outside of New York, The Royal Room (Seattle), Santa Fe Opera, Red Rocks.

The new album from The Westerlies, Wherein Lies the Good. This band has been working and touring extensively for 8+ years now and this record most fully captures the range of what we do!

I am very proud of the music we make with The Westerlies. There is something really magical about what is possible when going really deep into the music with the same folks for years. On tour, in rehearsal, in the studio. I think the sound we have cultivated is unique in the world, and the emotional responses we get from folks is profoundly moving and encouraging that we are on to something...

I wanted to be a chef until I was 15! Still love to cook.

The music is wildly vibrant, diverse and global, which I find tremendously exciting. The infrastructure to make a living playing this music is less healthy, I think. But the music itself gives me a lot of optimism. I think the world needs more of it.

First and foremost, a dedication to the music itself. The music has to be great. Aside from that, I think there is a lot of work to be done on gender and racial equity in the Jazz world (at every level from musicians, bandleaders, critics, presenters, labels, radio, etc...) It will be better for the music itself to have more diverse voices contributing. But also, representation matters to inspire the next generation!

Lots of touring coming up with The Westerlies this spring and summer and some exciting concerts with New York Youth Symphony Jazz Band featuring Steve Wilson (March 9th) and Wycliffe Gordon (May 11th.) Beyond that, I have a few recordings coming out this year under my own name! A large ensemble piece called Austerity Measures as well as a new EP of chamber music called Shutter. And in the fall, The Westerlies & Theo Bleckmann will be releasing our album of protest music from a variety of traditions old and new.

The performances don't scare me! If I have to remember of a bunch of names or people to thank, that gets a little scary...

Perhaps this is narcissistic, but a song I wrote called "All To Ourselves" would be great for a funeral, and has a lot of personal meaning.

Depends on the day!

Billy Strayhorn? He was a man of great intellect and varied interests and I think the conversation would be fascinating!

Tips for staying healthy on the road?

Drink more water than you think you need, and echinacea tea (at least) daily.