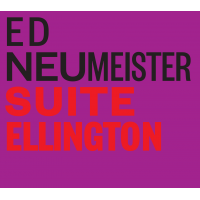 A complete summary of trombonist Ed Neumeister's musical career would date back to his pre-school years. Initially a regular fixture on the San Francisco circuit, he later immersed himself in the New York jazz scene dividing almost thirty-five years between the Duke Ellington Orchestra and the Mel Lewis Big Band. His additional experiences with classical orchestras and ensembles helped solidify his skills as a conductor and composer. On Suite Ellington, Neumeister and his sextet take on some familiar and less covered Ellington compositions, leaving their distinctive mark on each piece.

Reed player Billy Drewes has recorded and toured with many well-known artists like Herbie Hancock, Bill Frisell, Randy Brecker and John Abercrombie. Trumpeter Jim Rotondi has most notably worked in the big bands of Ray Charles, Lionel Hampton and Toshiko Akiyoshi. He is a founding member of the sextet One For All, which features saxophonist Eric Alexander. The late pianist Fritz Pauer play with Art Farmer, Dexter Gordon and others, while bassist Peter Herbert spread it around with pop luminaries like Paul Simon and the third-stream composer Franz Koglmann. The best known member of the group is drummer Jeff Ballard whose associations with Pat Metheny and especially Brad Mehldau make him the contemporary jazz household name in this sextet.

While Billy Strayhorn is a key element in Suite Ellington, the set opens with the exception, the classic "Caravan" composed by Juan Tizol and Ellington. Typical of most tracks here, Neumeister unwraps the piece with some degree of reverence to the original. But his ability to literally and figuratively make the trombone speak in a humanoid voice, is a big part of the interpretation of these compositions. The Queens Suite, written for the UK monarch, is a lesser known work but a great example of Ellington/Strayhorn's rhythmic flexibility. The Far East Suite is represented with "DEPK.' The suite, motivated by a 1963 tour of the Middle East was, like The Queens Suite, rarely performed by Ellington. Neumeister and company take this piece first on face value and then reinvent the arrangements.

Neumeister and Pauer lead the way in the creative license taken with these legacy compositions. In most cases, they are surprising bold in their scope and tractability. Along with Drewes and Rotondi, the players infuse their unique creative spirit while maintaining the solid foundation that these Ellington/Strayhorn pieces deserve. Aside from Neumeister's own artistic accomplishment on Suite Ellington, we are reminded that Strayhorn was Ellington's equal in every way short of notoriety and a public face.