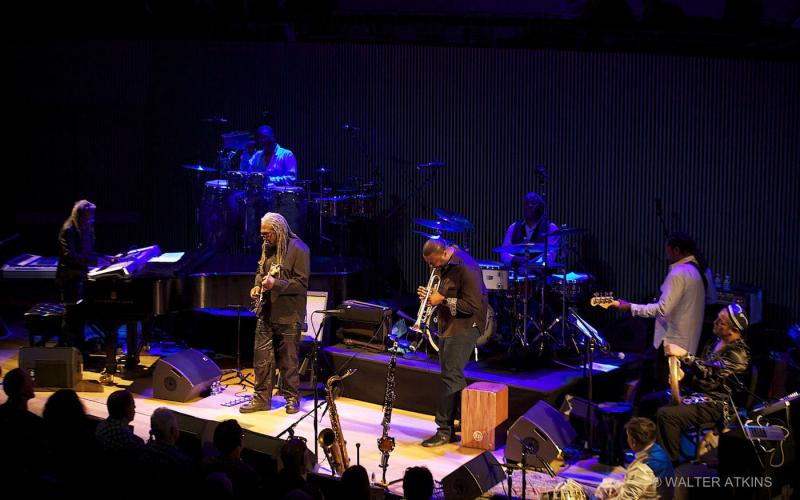 Since his death in 1991, one month after his final performance at the Hollywood Bowl, there has been a vacancy in the jazz trumpet chair. While many have risen as stars on the instrument, no one has quite matched Miles Davis. Davis's bands brought many of today's most successful and best known performers to public prominence: Keith Jarrett, Herbie Hancock, John McLaughlin, Chick Corea, Jack DeJohnette, Wayne Shorter, Al Foster, Joe Zawinul and Dave Holland, among others.

While much of his earlier work continues to be performed, it is rare to see his electric-band compositions and recordings—which have been both loved and loathed and reviled and praised—performed live. Over the years, there have been a few ensembles which have produced his compositions. One such moment came in 2014 at SFJAZZ in San Francisco, when Davis' nephew, drummer Vincent Wilburn, Jr., brought together a variety of musicians in the form of the Miles Electric Band; some were Davis band veterans; others were relatively new to the music. This year Wilburn brought almost the same crew, but with some substitutions, back to SFJAZZ Center.

New to the spotlight in this ensemble was trumpeter Sean Jones. The gospel-rooted Jones first developed an interest in jazz when his high school band's leader made him a present of two Miles Davis recordings: A Kind of Blue (Columbia, 1959) and Tutu (Warner Brothers, 1986). Since then, Jones has produced seven CDs as a leader for the Mack Avenue label and performs with the SFJAZZ collective.

The band took the stage without introduction, and a short video highlighted the members with still photographs. Electronic finger-drummer, remixer and programmer Jeremy Ellis launched into a short solo on his 16-pad MASCHINE; this gave way to a lyrical tabla solo by the Calcutta-born master Debasish Chaudhuri. A funky riff ushered in "Jack Johnson," and accomplished Davis-alumni Robert Irving III worked the electronics and the acoustic piano, and his longtime protégé, Robert Spero, worked his keyboard set. Guitarist Blackbyrd McKnight and drummer Wilburn added to the mix with vibrant rhythms.

Tenor and soprano saxophonist Antoine Roney, a bandleader in his own right, added fire to Munyungo Jackson's fierce conga playing. Jones went to town on his muted trumpet. The atmospheric "In A Silent Way," a composition of the late Joe Zawinul, was followed by "Decoy," "It Gets Better," the Wayne Shorter-composition "Sanctuary," "Nefertiti" and "Pharoah's Dance."

During the course of the evening, there were a number of memorable solos. Moving out from behind from his conga set, Jackson moved to center stage and seated himself on a cajón—the box-like percussion instrument invented by Afro Peruvians—and dueted with Chaudhuri on tabla, jumping up with a flourish at the end. Chaudhuri showed his chops with a tabla solo, while Abbos Kosimov captivated the audience by showing his mastery of traditional Tajik instruments—the doyra (a frame drum, also variously referred to as dayereh, dojra, dajre, doira, and dajreja) and the qayroq, a set of exotic castanets. Producing tones resembling galloping horses, Kosimov twirled this frame drum, tossed it in in the air, circled it with his finger as if it were a frisbee and then, still holding it, let loose with one qayroq in each hand. Electric bassist Darryl Jones, known for his work with Davis, Sting and the The Rolling Stones, also soloed powerfully.

The evening climaxed with the funky, unforgettable Davis classic "Jean Pierre," and Wilburn then announced the band's members.