Noah Preminger: Some Other Time 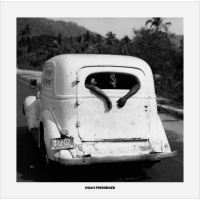 After several releases, tenor saxophonist Noah Preminger's uniqueness has become more evident. In large part, this curve is due to Preminger's own patient development of a creative process; part is an individual style but much of the appeal is in how he creates around the broader dynamics of his various groups. What has been consistent, from the modern post-bop/hard-bop of Dry Bridge Road (Nowt Records, 2008) through the raucous swing of Pivot: Live at the 55 Bar (Self-Produced, 2015), is that the propinquity of his work is challenging and gratifying in equal parts.

The fledging, vinyl-only, Newvelle Records adds Preminger's Some Other Time to their small but growing catalog and this recording does more to bring the parts of the artist's creative progression into a whole. Joined by Ben Monder on guitar, bassist John Patitucci and Billy Hart on drums, the album continues Preminger's exploration of the Mississippi Delta Blues. Having more wholly immersed himself in that study with his previous Dark Was The Night, Cold Was The Ground (Self-Produced, 2016), this new outing has a darker, more haunting feel overall and is the best work to date from the prolific young artist.

The first thing that stands out about Some Other Time has little to do with the music. We are reminded, with Newvelle's vinyl releases, that the LP format was—and is again—a prodigious venue for graphic art. The French photographer Bernard Plossu's cover is so visually evocative that it begs for framing and after a few listens, the visual aspect feels as indelible as the narrative.

When we think of the delta blues, the names that come to mind might include Big Joe Williams, Muddy Waters, Robert Johnson, James Cotton, Howlin' Wolf or John Lee Hooker. But Preminger is not about emulating the legends of that constituency as much as putting his stamp on a jazz-oriented variation of delta blues. To that end, the leader applies his craft to original work and that of some composers who are fairly unlikely choices.

Preminger's deep, rich sax and Patitucci's woody bass give Billy Strayhorn's "My Little Brown Book" the ambience of a smoky back-room speakeasy. The eclectic Monder counters the Preminger's density by deftly floating just above the sax and bass while Hart adds a bit of mystery with his light, shadowy touch. Preminger's own "Semenzato" is a good example the composer's skill in capturing the ambience of the period while imparting a modern sensibility. The 1932 standard "A Ghost of a Chance" was a collaboration of Victor Young, Ned Washington and Bing Crosby and was recorded by dozens of other popular artists from Billie Holiday to Linda Ronstadt. Paraguayan Agustín Barrios Mangoré was one of the first classical guitarist to make recordings in the early 1900s. His "Una Limosna por el Amor de Dios" is redefined and laced with Preminger's structured improvisations in a forceful but not aggressive manner.

Side B opens with "Porcelain"; Monder's fluid and evocative playing drifting into Preminger's moody tenor while Hart expertly weaves the solos together with his own contemplative musicality. Patitucci's brief solo on another often-recorded 1930s composition, "Try A Little Tenderness," is a highlight of his overall refined and restrained contribution to Some Other Time. An unusual choice, and barely recognizable compared to its Bob Dylan roots, "Boots of Spanish Leather" still manages to adhere to the album's theme. The title track—written by the team of Leonard Bernstein/Betty Comden/Adolphe Green—perfectly closes the collection of ballads, sounding both mournful and hopeful.

One is likely to hear Lester Young or Ornette Coleman in Preminger's playing but he has a refreshing originality that stands apart from whoever his influences may be. In his interpretation of the delta's root music he is neither retrospective nor conventional; he is less concerned with adhering to the blues structure than with the emotion. With this all-star band in tow, Preminger does what he does best—he tells a compelling story without frills, relying on raw talent and he does it better than he has ever done before.

Side A: My Little Brown Book; Semenzato; A Ghost of a Chance; Una Limosna por el Amor de Dios. Side B: Porcelain; Try A Little Tenderness; Melancholia; Boots of Spanish Leather; Some Other Time.