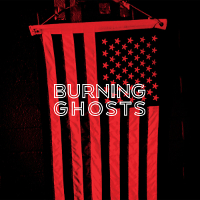 Daniel Rosenboom has quickly become one of the leading voices in the West Coast jazz scene. The Los Angeles-based trumpeter recorded his formative work for Vinny Golia's esteemed Nine Winds label in the mid-2000s, but has since founded Orenda Records to document his hometown's burgeoning underground scene. Rosenboom's latest offering as a bandleader is the self-titled debut of Burning Ghosts, a dynamic electro-acoustic quartet that draws creative inspiration from the specter of social injustice.

The City of Angels has had its fair share of high-profile social ills, especially in relation to issues of race—from the 1965 Watts riots to the beating of Rodney King. Using these incidents and myriad others as source material, guitarist Jake Vossler, bassist Richard Giddens and drummer Aaron McLendon bring an array of emotional interpretations to play in Rosenboom's dramatic compositions, ranging from sorrowful resignation to righteous rebellion.

The frontline of trumpet and electric guitar makes an especially potent combination in this amplified setting; Rosenboom's meditative open horn introduces the opener, "Anthem," with weary solemnity while the rhythm section rails in opposition, providing fascinating textural contrast with molten shards of electric fury. "Defiance," on the other hand, pairs Rosenboom and Vossler in a vertiginous gambit of intersecting lines, unleashed over a blistering thrash metal groove. Conversely, "Elegy" lives up to its title, with muted trumpet and resonating guitar contemplating a plaintive theme with restrained force. Equally diverse excursions appear throughout the date, culminating in the climactic "Manifesto." Building from elastic walking bass accompanied by choppy overdriven guitar, the closing opus transitions episodically from traditional swing to free polyphony and avant-metal in turn, sonically reinforcing the album's underlying concept of conflict and upheaval.

A timeless meditation on the unsolved problems of economic and racial inequality, Burning Ghosts is a modern jazz protest record in league with the politically-charged efforts of the New Thing, extending the innovations of luminaries like Max Roach and Archie Shepp into the new millennium.