Having a celebration for the 70th birthday of an amazing musician—drummer Jack DeJohnette—was an outstanding feature of this year's Newport Jazz Festival. The drummer was featured in two sets in a single day (Saturday), first with a band he has been doing a lot of work with for many months, then with a group of "friends" playing some of his other music.

Once again, the music was pretty outstanding across the board. With three stages operating each day, it wasn't easy to keep up such quality and diversity. But George Wein's group did themselves proud again. It's also a slightly dizzying experience for the loyal fans that turn out, trying to decide which group to take in. Or get their logistics on how they'll negotiate from stage-to-stage to catch pieces of different sets; a musical smorgasbord.

It was hard to go wrong, at any rate.

Aside from being a monster on his drum set, DeJohnette is one of the most diverse musicians around. He is open to all kinds of different sounds. He investigates different musics. He hears younger musicians and sees what they have to offer. His influences are vast. Then he has the good taste to amalgamate them in the appropriate manner and emerges with captivating music that is all his own. His art.

DeJohnette's first group featured George Colligan on keyboards and pocket trumpet, Rudresh Mahanthappa on sax, guitarist David Fiuczynski and Jerome Harris on bass. It was an eclectic mix of music, showing different colors. Quirky melodies, mellow spots, edgier moments in odd time signatures, fine solos, all melding into a beautiful whole. "Amah the Terrible," written by DeJohnette was a good example. "Priestess of the Mist," was gorgeous, particularly in the guitar and sax solos, but always with the drummer supplying a grooving yet elastic, beat. His "Miles" touched on different aspects of his former employer's musical life, but mostly the electric period, when DeJohnette was in Miles Davis' band. It echoed the trumpeter's In a Silent Way" as its theme and the solos were funky, fiery and freewheeling. Maybe the hottest soloing of the set and a great ending. 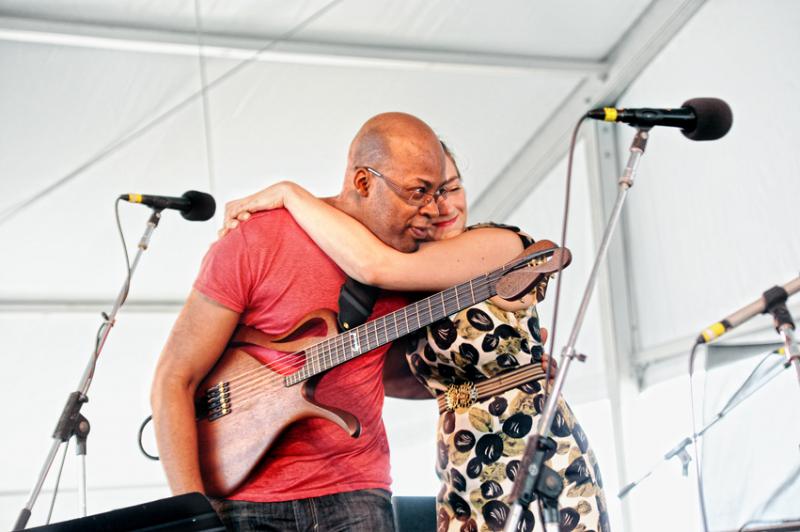 The "Friends" group included Colligan—an excellent pianist and damn good trumpeter—again. But the rest of the cast changed, with Christian McBride on bass, Lionel Loueke on guitar, Tim Ries on saxophones, percussionist in Luisito Quintero and trumpeter Jason Palmer. But the set opened with a duet between drums and pianist Jason Moran, where the two kind of freelanced and played off one another. It covered everything from Latin—"Salsa for Luisito"—to freer things, to easy going swing. The drums were the glue and held together a memorable performance. Ries' work on sax was stellar and McBride was always a strong presence.

One of the great sets was a quintet led by Lewis Nash, with a fine front line of trumpeter Jeremy Pelt and saxophonist Jimmy Greene, with Peter Washington on bass and Donald Vega on piano. The group bolted out of the gate with "Teddy" and didn't look back. The band swung its ass off and the solos were bold and sassy. Pelt had great style and style and burned like hell. Greene proved an equal mate, playing with a pleasant swagger. Bassist Ron Carter has been touting the talents of his new pianist, Vega, and the man did nothing to tarnish that playing with Nash's group. His solos were tasty and inviting. Great style and his feel and time were as key to the proceedings as Nash's always superlative drumming.

James Carter's organ trio is always a blast, and adding Rodney Jones on guitar enhanced it further. It's tinged with blues, and the sax blended well with Jones' rich guitar sound. Gerard Gibbs is an underrated organist who burns and has the necessary skills to keep up with the bravado of Carter's muscular appoach.

Zenón comes up with projects that are off the beaten path. Lately, the altoist has been teaming up with pianist Laurent Coq, writing music based on a novel by Julio Cortázar called Rayuela (1963), and Zenón has recently released an album of the same name on Marsalis Music. The music from that album—brought to life by Dana Leong on cello and trombone, pianist Coq (who helped write the music) and Dan Weiss on his unique drum/tabla setup—featured strong melody and enough space for strong solos by one of today's finest saxophonists. Leong is a pleasure, too, capable of just about anything, hot or mellow. 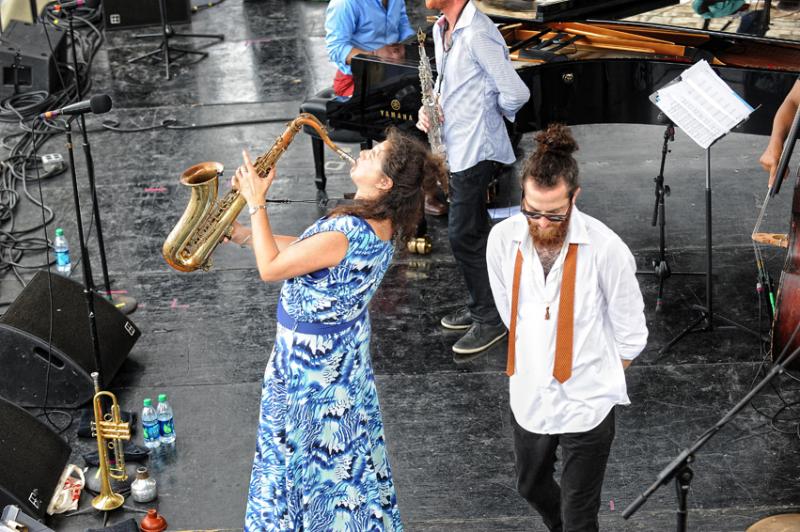 A sheer delight was the 3 Cohens. The siblings tore up the stage, playing original music and a couple standards. The fun they had on stage transferred to the audience. But don't think the music was diluted. These musicians—Avishai on trumpet, Anat on tenor sax and clarinet, and Yuval on soprano—played with great intensity. Yuval's "Blues For Dandi's Orange Bull Chasing An Orange Sack" started the show and set the tone—a burning opportunity for each to demonstrate some chops, supported fantastically by Reuben Rogers on bass, Rudy Royston on drums and Aaron Goldberg on piano. They were as hot as the summer weather. "Shufla De Shufla" grooved like made and a great vehicle for the siblings' solos, closing a super set and leaving 'em wanting more.

Big bands were there, including two of the finest in Darcy James Argue's Secret Society and the Maria Schneider Orchestra. They used some of the same players over the weekend, as the do at New York City appearances, but both composer/arranger/leader had his/her own way. They both built great tapestries for examination. Layers and textures were expertly tied together.

Argue's band covered things from the sublime to raucous and funky. Stately and dramatic to swinging. Selections from his Brooklyn Babylon CD, inspired by a movie and yet to be released, were outstanding, and it was easy to imagine them fitting into a cinema setting.

Schneider's organization performed some of her well-known themes like "Evanesque," which featured a scorching trombone solo by Marshall Gilkes, who is becoming a major player on his instrument. His sound and agility were remarkable. The understated but fantastic saxophonist Steve Wilson wailed on "Night Watchman," as did Ingrid Jensen who never disappoints on trumpet.

"Hang Gliding" was another fine Schneider staple on her compositional menu and Donny McCaslin's bristling tenor sax helped elevate it.

Kurt Elling's band performed its typical compelling show. With his great collaborator, Laurence Hobgood, on piano and, on this gig, the superb Kendrick Scott on drums, the music took off from the start with "Fly Me to the Moon" done in a unique, twisting turning style that was captivating. "Dedicated to You," from Elling's John Coltrane/Johnny Hartman CD, Dedicated to You (Concord, 2009), was a ballad that, in the singer's indomitable fashion, took a different route. Notes were bended, phrases extended, shifted. Stevie Wonder's "Golden Lady" included a scat segment with his considerable vocal acrobatics playing off the sounds from guitarist John McLean, then cascaded nicely into the main melody as only this band can do it.

Wildly creative music that took winding turns, changed moods and overall pushed an edge were turned in by Jason Moran's Bandwagon and the Sound Prints band from Joe Lovano and Dave Douglas. In the latter band, the two horns have such creative minds and so much technique it can be too much for some listeners. But the Newport audience stayed in step. Lovano played with tremendous heart and passion. Douglas' lines were serpentine and impassioned as well, as he seemed to be drawn into telling a forceful story each time. Joey Baron's thundering drums were perfect for this group.

Moran, with Tarus Mateen on bass and Nasheet Waits on drums, played like a history of jazz. There were honky tonk moments, old trad swing moments, and definitely things that got into the free jazz state. He played tumultuously at times, and light at others. "Body and Soul" took on a completely different flavor. "Kinda Dukish," at times, seemed kinda Monkish. It's always interesting to see what turns this band will take in any given set.

Pat Metheny has assembled a fine group he calls the Unity Band, with Chris Potter on sax, Ben Williams on bass and Antonio Sanchez on drums. His compositions, some from the new CD bearing the band's name (recently released by Nonesuch), were diverse, showing various sides of his musical personality, and his sidemen were fully empathetic. Potter was a massive presence; injecting any setting with boggling chops, but always with good and tasty choices and not just sound bouncing off walls for the sake of it. He enlivened the band.

Not everything came from the new disk, though Potter says they recorded much more music than is on that recording. But the band was in good form, Metheny's guitar lively and expressive—pushed, as he so often is, by Sanchez. Williams, a young lion on bass, was solid as a rock.

The Tedeschi Trucks Band was a rollicking good time for those who like their rock infused with the blues, or vice versa. Susan Tedeschi has the most soulful voice on that scene, and is also a very good blues guitarist. Her voice can be felt in the solar plexus. Husband Derek Trucks has been playing scorching slide guitar since he was about nine. And the supporting cast, that included three horns (highlighted by fine young jazz trumpeter Maurice Brown), was extraordinary. This band could make some noise for a long time, particularly because its leaders change things up over time—repertoire-wise and otherwise—in order to keep growing.

Most of the music came from the group's new live recording, Everybody's Talkin' (Sony Masterworks, 2012). Like Allman Brothers Band, with whom Trucks also plays (and into which he has injected new life), there were two good drummers in Tyler Greenwell and J.J. Johnson. Brothers Oteil Burbridge on bass and Kofi Burbridge on keyboards and sometimes flute, were admirable musicians and really added breadth to the band.

Trucks was a first-rate guitar slinger. Every solo was an adventure, soaring and emotional. He took wing and brought the crowd there, too. More a flight through the clouds than down Route 66, though he could probably do that as well. 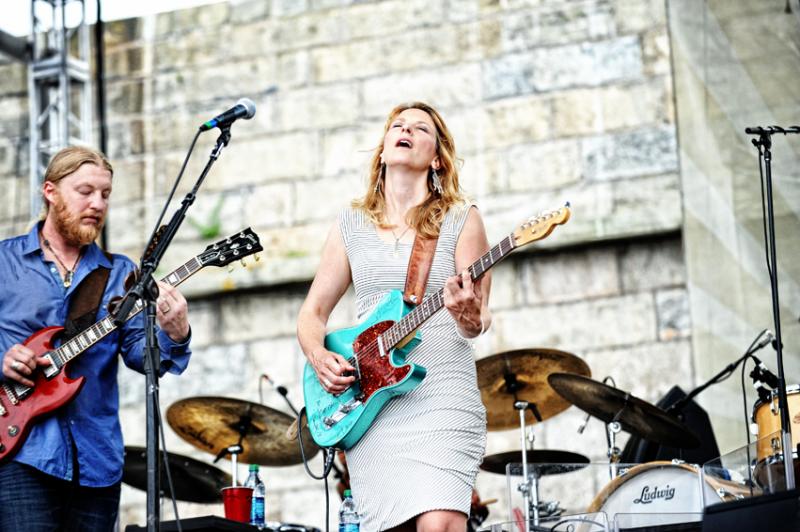 Newport has been on a righteous path ever since the return of George Wein. Quality and sincerity. This year, Danny Melnick became associate producer. A longtime employee of Wein, he started his own company a few years back and also produces Freihofer's Saratoga Jazz Festival in upstate New York. Based on his track record there, that can only bode well for the future of the event on the ocean in Rhode Island.