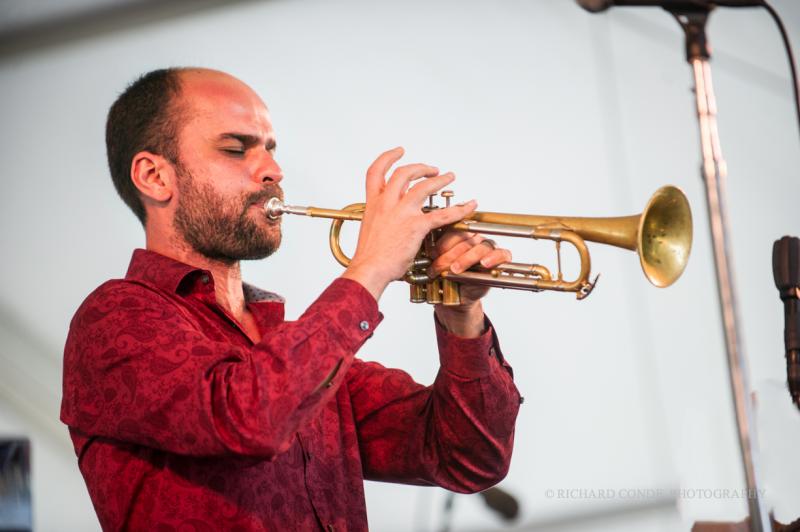 Smack—loud and robust, the horns blasted at the audience with a sound so voluminous it seemed impossible only four horns could have created it.

And yet, four horns had.

"Were you here yesterday?" Boston jazz radio host Eric Jackson had asked the audience during the band introductions —no doubt an obvious reference to prior day's the harrowing rain.

"You are hearty souls," he said in response to the cheers. Cheers from a crowd that had gathered for the 60th anniversary of the Newport Jazz Festival presented by Natixis Global Asset Management.

On an incessant, straight-ahead set, with lots of extended solos—the kind that lasted for 32 bars, used lots of vibrato, left the crowd momentarily stunned, yet had the hearty souls howling for more—the Cookers began the final day of the festival with a high-energy set that received an enthusiastic audience response.

Spurred by a rhythm section that kept constant hold of the one, yet toyed with subtle fills and time changes, the horns drove melodies in varying directions on a set that included Harper's "Captain Black," and "Croquet Ballet," McBee's "Peacemaker and "Farewell Mulgrew," a dedication to the late pianist Mulgrew Miller.

In contrast to the Cookers' high-octane performance, the Lee Konitz Quartet offered more mellow and subdued sounds. After playing the first few notes on the alto saxophone, Konitz looked at the instrument with a quizzical expression. He paused briefly, adjusted his reed, and then quickly resumed playing, encouraging the first of many laughs he would provide throughout the set.

Partway through the slow-tempo opener "Stella By Starlight," Konitz sidelined his horn to vocalize some scat. "We're very pleased, and proud, and all those kinds of things, to be here," he told an attentive audience that continuously increased in numbers throughout the performance.

"The pianist is gonna pick the next song. I just hope he picks something we know," Konitz heckled prior to "Thingin," the second piece from the set. At times, the lyrical qualities of Konitz's horn were matched by Dan Tepfer's piano. Quiet and intimate, this number saw different band members drop out for extended measures, while the remaining musicians used creative ways to complete the melody lines.

"I chose to play some correct notes," Konitz said about his solo. "I hope you don't mind," he playfully chided.

During "Body and Soul," the ocean breeze kicked up, and the first seagull of the day could be spotted on shore. It wasn't long before raindrops followed.

For "317 East 32nd Street" Kontiz called fellow altoist Grace Kelly to the stage. The set closed with "Darn that Darn."

While the beer may have been Monk, the music was all about Mingus. Opening with "Bemoanable," the Mingus Big Band took to the main stage. Fraught with rhythmic changes, harmonic nuances, and musical precision, the set also included "Invisible Lady," "E's Flat A's Flat Too," and "Fables of Faubus."

Always classy, and a man who consistently displays respect for the music, Ron Carter dedicated his set to "friends who are no longer here," he explained to the audience.

A commanding presence, Carter's warm, round bass sound anchored a tranquil set laden with meaningful expressions. Joined by guitarist Russell Malone and pianist Donald Vega, the trio, who wore matching suits, brought a touch of class to the drizzly day. Beginning with "Cedar Tree," dedicated to the pianist Cedar Walton, they explored a swinging four- four count that accented the three, every other measure.

The upbeat shuffle, "Laverne Walk," dedicated to the bassist Oscar Pettiford, garnered audience applause. A quiet set that required attentive listening, its sullen, gloomy qualities somehow had a happy feel. The set wrapped up with "Candle Light," dedicated to guitarist Jim Hall, "My Funny Valentine," You Are My Sunshine," and "Soft Winds."

Near the Quad Stage, Elmer's Store, a Cajun food vendor, was kind enough to offer shelter from the rain. Gumbo in hand, patrons experienced the Gary Burton Quintet as Jorge Roeder soloed on "The Lookout."

"Yeah!" someone in the audience hollered, inspiring a round of applause that prodded Roeder's playing. His hand floated along the bass, procuring notes of varying intonation, climbing higher and higher, until a harmonic overtone rang out, as the band came crashing back in unison.

During "Remember Tango," the rain had noticeably picked up, but the audience's moves were more related to dancing than they were related to avoiding the raindrops.

A noteworthy performance that served as a preservation of sounds, Brian Torff offered a set that focused on the music of Django Reinhardt. Reinhardt, who had limited use of his left hand, pioneered a new style of jazz guitar in the 1930s and is often cited as the first European to exert a significant influence on jazz music.

Violinist Pierre Blanchard counted off "Charelston," which utilized a variety of scratch chords and bayou backcountry sounds that hinted towards skiffle.

"This is our first time at Newport and we are very excited to be here," Torff said to the crowd, noting that all of the other musicians hail from France

Employing dazzling and elaborate finger picking speeds, the band held the audience captive on "Them There Eyes," while "Lovely Wife," an original piece by guitarist Samson Schmitt, demonstrated musicianship of poetic beauty.

"Tea For Two," which featured Pierre Blanchard's violin work and provided Torff an opportunity for a bass solo, fetched just one of set's five standing ovations.

In what was one of the festival's most unique and interesting performances, the music of Django Reinhardt brought the Quad Stage to its end, and the 60th anniversary of the Newport Jazz Festival was soon over. Newport: a heralded past that stands poised with a promising future. Now, here's to hoping that next year will a little drier!