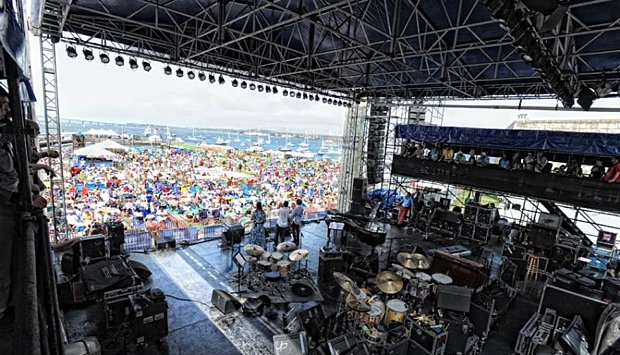 While countless jazz festivals have sprung up in all corners of the world, droves of people still flock to the one that's considered the granddaddy of them all. The Newport Jazz Festival has been a testament to the power, possibilities and pure entertainment values inherent in jazz for more than half a century. It sprung to life as a byproduct of high society, but it's evolved into a joyous gathering with egalitarian offerings and audiences. Jazz impresario George Wein created a blueprint for the world to follow when he put together this one-of-a-kind, once-a-year gathering of the greats, and every jazz festival owes a small part of its existence to Wein and Newport.

The 2012 edition of the festival opened with a NOLA-infused Friday night gala, featuring pianist/singer Dr. John and the Preservation Hall Jazz Band, but the two-day core of the festival wasn't nearly as genre-specific. Acts of all shapes and sizes stormed the stages to entertain the masses in their own special way. Saxophonist John Ellis & Doublewide provided a Crescent City aftershock, as they opened things up on the large Fort Stage with their own modern jazz spin on the New Orleans sound, but the tide quickly turned when guitarist Bill Frisell arrived with his John Lennon project. While the guitarist has rarely, if ever, been accused of catering to populist tastes, he had a massive audience singing along to classic Beatles tunes and nodding their heads in approval. The overly polite All We Are Saying... (Savoy, 2011) didn't properly prepare the crowd for the highly interactive and occasionally psychedelic mélange that Frisell brought forth. Highlights included "Across The Universe, ""Come Together" and "In My Life," but in all honesty, nothing in this set was short of marvelous. 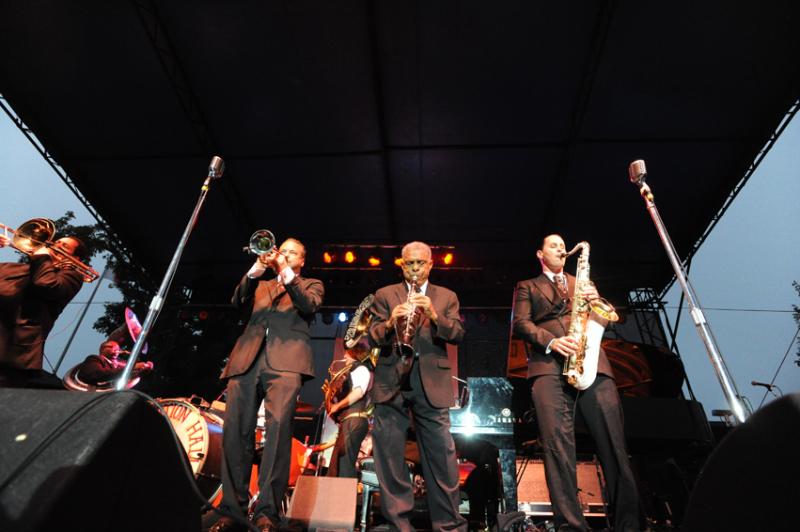 While the Fort Stage attracted the largest crowds, fans flocked to the smaller Harbor Stage and/or Quad Stage to see some killer ensembles at play in more intimate settings; gaining some tent-covered relief from the oppressive heat and humidity that held sway over the first day was a bonus. Bassist Christian McBride's Inside Straight played to an enormous standing room-only crowd at the Harbor Stage and the action never let up from that point on.

Later in the day, trumpeter Dave Douglas and saxophonist Joe Lovano delivered a bristling set of music with their Wayne Shorter-inspired Soundprints quintet. While the saxophone icon was the acknowledged influence, saxophonist Ornette Coleman's stamp was also evident in the group interplay. Drummer Joey Baron's musical antics and bassist Linda May Han Oh's springy bottom end helped to drive the band, as both musicians tapped into a seemingly endless reservoir of energy. Those who've heard some of Baron's sideman dates of late may have thought he was mellowing with age, but his playing at Newport said otherwise. Madcap fills, strong grooves and machine gun snare drum tantrums popped up frequently. Pianist Lawrence Fields carried himself in low key fashion, delivering manicured yet probing piano lines that contrasted nicely with the fiery horn work of the two leaders.

The final Harbor Stage act on Saturday proved to be one of the most memorable of the weekend, with three of the most important clarinetists in jazz joining together as one. George Wein made a rare appearance at the microphone, explaining that he'd been trying to get Anat Cohen, Ken Peplowski and Evan Christopher together for three years and he seemed elated by the fact that it finally came to pass.

They opened up with bent notes-a-plenty on "The Mooche," the first of several Duke Ellington numbers in the set. Each player took their own solo turn and offered something different in their work. Christopher, who literally and figuratively stood apart from Peplowski and Cohen with his New Orleans melting pot mentality and throwback sound, performed his own "Tande Sak Fe Loraj Gwonde (Listen To The One Who Makes The Thunder Roar)." Peplowski and guitarist Howard Alden visited Jelly Roll Morton's obscure "Why" in reflective fashion, while Cohen shed her Benny Goodman banner and moved to the Artie Shaw team for a performance of the clarinet icon's signature—"Nightmare."

When they joined forces again, a mellow blend of the reeds came to the fore with Ellington's "Mood Indigo," but a high energy take on his "Ring Them Bells," with interactive clarinet weaving and solo trading, won the day as the set came to a rousing end. Special, one-time-only events like this often have minor snags and this one was no exception. Drummer Joey Baron stepped up at the last second to sub for a traffic-detained Lewis Nash, who eventually arrived and reclaimed his throne, but this change in the rhythmic foundation brought an anything-can-happen excitement into the tent. 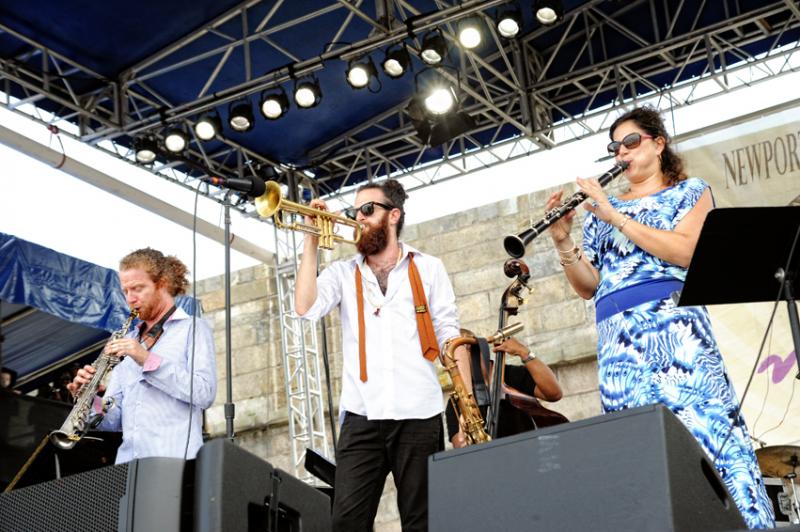 While the attendance seemed to dip a little bit for Sunday's performances, the quality of music remained high. Violinist Jenny Scheinman opened up the Harbor Stage in duo with Frisell, and they eased the audience into day two. Their set shifted between serenity and playfulness, as both musicians mirrored each other's intentions, finished each other's thoughts and gleefully played cat and mouse ("Rag"). Anat Cohen also returned for another go-'round, joining brothers Yuval Cohen and Avishai Cohen - Trumpet on the Fort Stage. The 3 Cohens delivered a set in support of Family (Anzic, 2011), and performed with telepathic rapport throughout. While Anat favors her tenor saxophone in this band, she picked up the clarinet for another stab at "The Mooche." This Ellington classic garnered plenty of applause, but originals, like "Family" and the über-hip "Shufla De Shufla" provided a better sense of the Cohen family's roots.

While it's impossible to graft a theme onto this festival, big band variety was a trending topic. On Sunday afternoon alone, it was possible to hear Ryan Truesdell's Gil Evans Centennial Project, Vince Giordano & The Nighthawks, and Maria Schneider's Jazz Orchestra. Truesdell's set paid tribute to the great arranger and composer through performances of newly recorded discoveries, like the Indian-spiced "Punjab" and the calming "Look To The Rainbow," which featured guest vocalist Gretchen Parlato, but he also paid tribute to the festival's history. The set-closing "Sister Sadie," which pianist Horace Silver played decades ago at Newport, was but a single example. Schneider's signature harmonies floated through the air and a gentle breeze finally appeared during her orchestra's turn on stage. The highlight of her set was the debut performance of "Home," which was written for the occasion and featured the inimitable Scott Robinson, but their entire show was truly a team effort.

Thirty different acts in total performed during the two-day occupation of Fort Adams and, while staggered starts across the stages allowed eager act-torn listeners to hear bits and pieces of concurrently performing artists, it was impossible to catch it all. It was regretful missing out on guitarist Pat Metheny's Unity Band, drummer Jack DeJohnette, the Tedeschi Trucks Band, pianist Jason Moran, and several others, but the seven full sets and handful of partial performances caught testified to the fact that jazz is alive and well, in all its various states and forms.