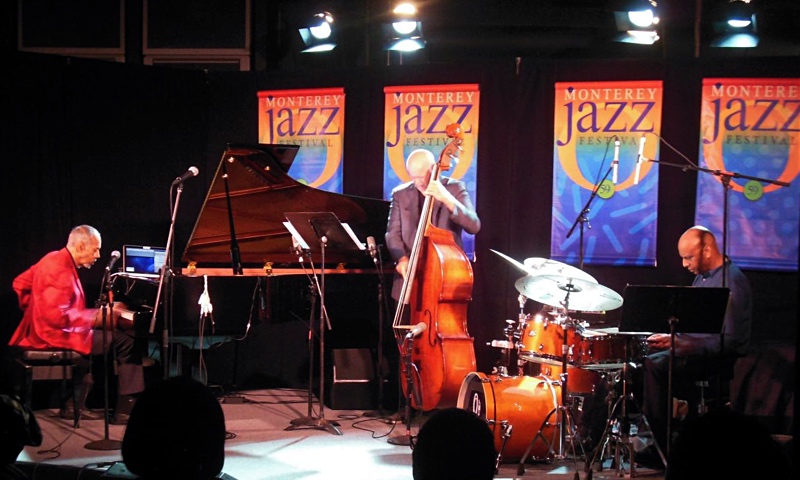 In its 59th annual edition, the Monterey Jazz Festival once again delivered on its promise to bring a stylistic plethora and pageantry—with nods to more abstract or daring fare—to the Monterey County Fairgrounds. Among the marquee bragging rights: an impressive new commissioned chamber jazz piece, "The Unfolding," by Wayne Shorter; a good clean fun-making big band tribute to Quincy Jones influential soul and jazz-bridging A&M albums, a residency by increasingly bold bandleader and project-maker Terri Lyne Carrington which included a headlining set by the drummer-leader's much-acclaimed Mosaic Project. From the notable younger set of jazz players making an impact, to varying degrees, the barely-into-adolescence piano sensation Joey Alexander over-packed the Garden Stage, later lit up with the captivating aesthetic graces of flutist-vocalist Elena Pinderhughes.

Speaking of young sensations... to wrap up the festival in a circus-like burst of virtuosity and friendly grandstanding, the genuinely remarkable young Brit Jacob Collier proved the most self-reliant and athletic of performers all weekend. Following a stirring, warming set by Pat Metheny's fine new quartet (with old pal Antonio Sanchez and Metheny-world neophytes pianist Gwilym Simcock and bassist Linda May Han Oh), Collier took to the big stage by his lonesome. But the sonic fruits were anything but lean. Amidst a dense array of instruments, the 22-year-old wunderkind raced between keyboards, drum kit, guitar, bass and grand piano, to build up dazzling thickets of sound, via looping and an elaborate vocal harmonizer system. As YouTube visitors know, his version of "Don't You Worry 'Bout a Thing" is a brain-teasing wonder, especially exciting when witnessed live, and likewise, his post-modern trickster take on the Gershwin-ia of "Fascinating Rhythm" was rather mind-blowing. Still, we wonder about what the future holds for a jazz artist so wrapped up in the one man band game, in a genre celebrating conversation and cross-fire. In the end, fireworks notwithstanding, the show felt a tad lonesome.

A few of my personal wow moments in the margins included catching the new (yet old soulful) Still Dreaming—a tribute to the Old and New Dreams band (itself a tribute to Ornette Coleman's acoustic band), respectfully rendered by late saxophonist Dewey Redman's son Joshua, the late Charlie Haden protégé Scott Colley, Don Cherry-inspired cornetist Ron Miles and nimble, Billy Higgins-esque drummer Brian Blade finding their own lithe groove, colored by the band of old; the unique Billy Hart Quartet (featuring pianist Ethan Iverson and gentle giant tenor saxophonist Mark Turner, along with bassist Ben Street) on the occasion of the drummer-leader's 75th birthday year, cooking up its own savory, creative musical stew, where melodic, impressionistic and category-busting ideals meet. Another unforgettable moment: I was also entranced by young Canadian-in-New-York pianist Kris Davis' powerful, poetic and free-to-be-free trio, featuring the ever-inventive and lankily loose-limbed drummer Tom Rainey and bassist TK. With this refreshingly iconoclastic variation on the theme of piano trio conventions, we had the prize act of this Monterey fest's experimental niche.

This year's crop of piano trios making their way into the small Coffeehouse Gallery venue—where a trio will play three sets during a specific evening—was a model of balance and variety, climaxing with the Davis Trio's triumph of adventurism. Luminous pianist Sullivan Fortner's set asserted polish and heat in a mainstreaming direction, including a fascinating arrangement of the children's television classic "You are Special," by Fred Rogers (yes, that Mr. Rogers, who insisted on ushering jazz into his TV-landscape), while Stanley Cowell (emerging from his long tenure as an academician into the performance world), traversed more intellectual byways and a cool technical bravura less about flash than intellectual inquiry mixed with earthiness.

Still Dreaming was, in fact, one of three sets this year featuring Redman, in a kind of unofficial residency of sorts. This triple-header showcase, also at the helm of his own long-standing quartet and in the invitingly inventive special (and cleverly-named) project The Bad Plus Joshua Redman—a clear highlight of the arena stage program this year—served to illustrate the expanding range of the saxophonist's musical vision and aptitude in recent years. His career has involved a search for a center, but we're getting the point that the search itself—including the quest for finding his place in the shadows of his father's legacy—is part of the central identity of who he is as a musician, a point underscored by his Monterey visit(s).

Other moments in Monterey linger in the avid show-hopper's memory. Late on Saturday night in the arena, the Branford Marsalis/Kurt Elling show nudged into welcome overtime when Marsalis invited trumpeter Ingrid Jensen and saxophonist Tia Fuller—having played in the earlier Mosaic set—onstage for a raucous run through "St. James Infirmary." The next afternoon on that same stage, the masterful west coast get down phenomenon Kamasi Washington continued his dizzying global trajectory by bringing his band's retro-now sound outta' South Central LA to this legendary best-in-the-west jazz fest.

Over in the Dizzy's Den venue, do-no-wrong bass master Christian McBride, who had been a valuable player/leader of the Quincy Jones tribute on Friday night, laid down some acoustic piano trio law with his robust group, featuring young, clean-burning dynamo Christian Sands at the piano and Jerome Jennings on drums. The same room played host to the quartet led by thinking person's saxophonist Donny McCaslin, a New Yorker who grew up in nearby Santa Cruz, and whose stellar career just outside the hot spotlight in jazz leapt up into a high profile beyond just jazz when the late, great David Bowie tapped his group to play on Bowie's stunning swan song album, Black Star.

For all of the musical strengths and temptations this year in Monterey, one of the more memorable—if brief— moments on stage came during the Saturday night arena stage program, when artistic director Tim Jackson took a rare step outside of his usual cool, self-effacing role in the background/backstage to accept the Berklee School of Music's George Wein Impresario Award. Jackson thanked the festival board "for giving me the keys to the car, and trusting that I won't steer it off the road."

In fact, during his now 25-year tenure at the helm of a festival which had grown conservative and hidebound when he took over, Jackson has tended to a fairly miraculous driving record as jazz festival-making go. He has also braved a bit of adventurous slaloming and admirable risky booking business along the way. When the sweep of a given festival program—including the 2016 model—is considered as an overview, we recognized that the goal continues to be to survey the diverse spread of what makes jazz what it is, both in that historical moment and with respects to important traditions gone by, but still embedded in the jazz spirit and language.

Onward to year 60 and, one expects, a suitable milestone-d blowout.