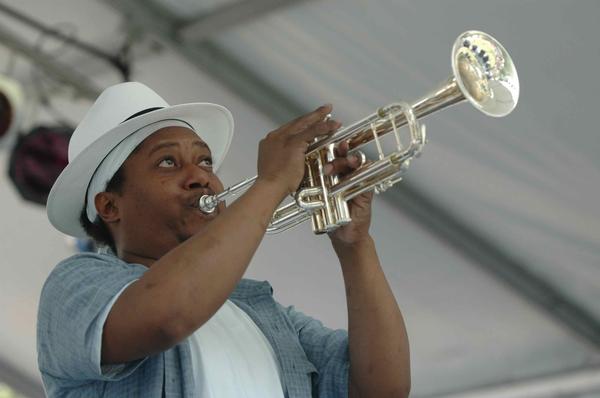 By Larry Taylor
October 8, 2011
Sign in to view read count
54th Annual Monterey Jazz Festival
Monterey Fairgrounds
Monterey, CA
September 16-18, 2011
The Monterey Jazz Festival—still going strong after 54 years. What's more, this year, Sept. 16-18, it was better than ever: the music was great; weather warm yet crisp and the atmosphere bucolic at the Monterey County Fairgrounds in Northern California.
What schedulers did so well this time was to creatively juxtapose the old and the new, bringing veteran jazz masters and their work alongside newer stars on the rise.
As always, this heterogeneous assemblage of groups played in five venues, scattered throughout the grounds: the large outdoor Jimmy Lyons Stage; the smaller outdoor Garden Stage; the mid-size indoor Dizzy's Den and Night Club; and the intimate Coffee House Gallery. In addition, the barn-like Jazz Theater held simulcasts of Lyons Stage events.

Having this much jazz at a fan's disposal posed a lot of hard choices. Although many headliners featured on the Lyons Stage appeared in other place, many attractions could be seen only in smaller spaces. As usual, here, there was a lot of picking and choosing. Regrettably some favorites had to be missed.

The opening night on the Lyons Stage presented a perfect example of new and old. On the scene since 2003, Hiromi, with The Trio Project, came on ready to wail on piano, accompanied by a high-powered rhythm section—electric contrabassist Anthony Jackson and drummer Simon Philips. Playing with extreme animation, Hiromi sometimes held herself back for effect, only to punctuated chords by standing up and stomping. It wasn't long before the music brought the crowd to its feet, too.

The highlight of her set was an ingenious take on Beethoven's "Sonata No. 8, 2nd Movement." She took this well-known melody and created incredible tension, finally giving the crowd an exuberant release. Hiromi clearly knew how to play her audience.

An older pro who also knows how to please a crowd, guitarist/vocalist John Pizzarelli was up next. His musical agenda definitely pays obeisance to the past, selecting liberally from The Great American Songbook. 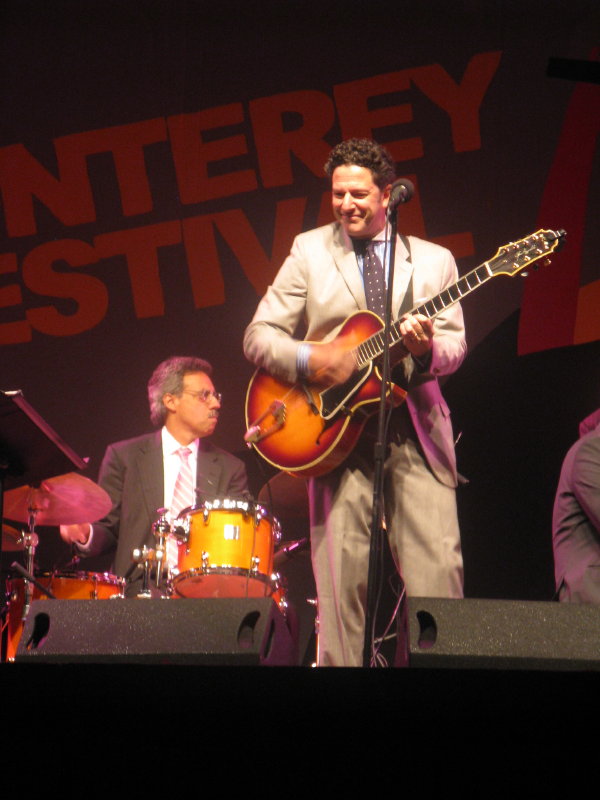 Besides his regular quartet of fleet-fingered pianist Larry Fuller, brother/bassist Martin Pizzarelli and drummer Anthony Tedesco, the guitarist also featured his very talented and witty wife, Jessica Molaskey. Their duet on what Molaskey said was Vincent Youman's meditation on co-dependence, "I Want to Be Happy," was priceless. She quoted lyrics to illustrate: "I want to be happy, But I won't be happy until you're happy too."

Next, they charmed with their doubling of George Harrison's "My Guitar Gently Weeps" and Fox-Gimbal's "Killing Me Softly." Soon, Bucky Pizzarelli—John's celebrated 85-year-old father, guitarist and banjoist—joined in. They took off on some tight, swinging duos, especially Juan Tizol's "Perdido" and Duke Ellington's "In A Mellow Tone." This family knew how to sell a song, and the audience loved it.

Earlier that evening, the Robert Glasper Trio played the Garden Stage. His witty repartee and eclectic style, as he played around with rhythmic and chord textures, was well-received.

This time slot on Lyons Stage is always for blues or good-time music. This year it was Afternoon in Treme, named after the HBO series placed in post-Katrina New Orleans.

The set started with the Soul Rebels Brass Band merging street music with hip-hop. After a spirited start, the old-time favorite, Kermit Ruffins, came in on vocals and trumpet, getting things going with the wildly rhythmic "Skokiaan."

Dumpstaphunk then took the stage, and keyboardist Ivan Neville led the band in raucous New Orleans funk. The group was also joined by trumpeter Terence Blanchard.

On a radio interview earlier in the day, Blanchard made the point that Caribbean music had greatly influenced the New Orleans sound. This fact could certainly be heard all day, illustrated by Ellington's "Caravan," with the group igniting at the end, lit up by Blanchard and Ruffin's scorching trumpets.

Later that afternoon, rock group Huey Lewis and the News came on. Not jazz, but at venues nearby the crowd's cheers could be heard.

Early on, vocalist Pamela Rose and her Wild Women of Song brought her show to the Night Club, delving into the lives and times of women songwriters, from Tin Pan Alley to the swing era. It featured slides to illustrate her narrative, and selected songs from the work of these talented women, many unheralded. 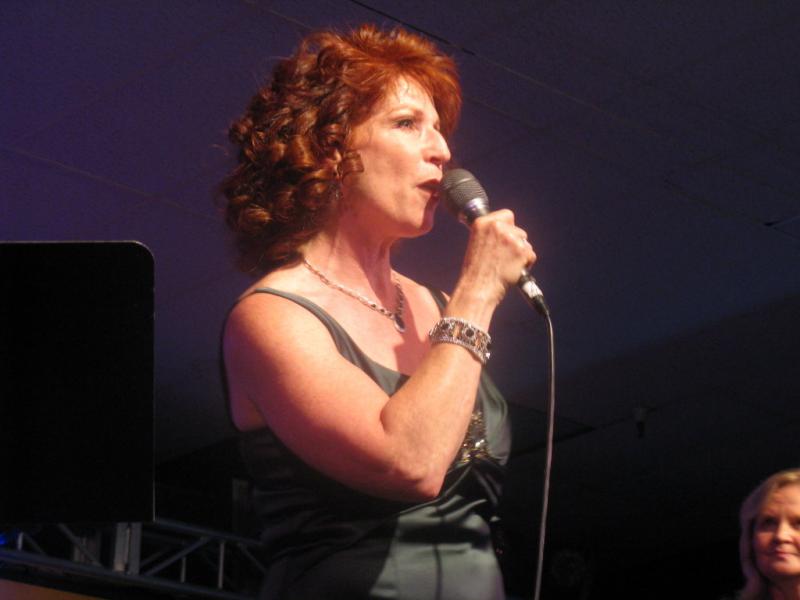 Allen opened with her instrumental trio, including bassist Kenny Davis and exciting young drummer Kassa Overall. On the opening tunes, her majestic style and dynamic technique brought the crowd to rapt attention. 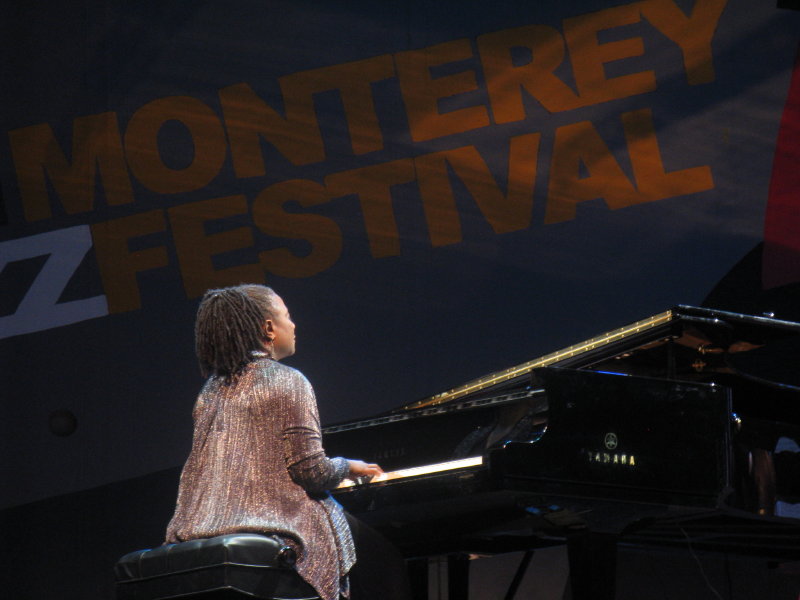 
Soon Chestnut came on, dazzling with his time steps and slip-and-slide moves. On Allen's "Philly Joe," he had fun trading bars with Overall, while on the David-Ramirez-Sherman classic, "Lover Man," he twisted and gracefully glided amidst his shoe's rat-a-tat rhythm.

Timeline finished off with Allen's commission, "The Dazzler: A Jazz Tap Tribute to Sammy Davis, Jr." Beforehand, Chestnut asked, rhetorically, "Where did Davis get his steps?" He answered, "He stole them," and proceeded to show how and why.

Redman was out front, but everyone shared solo space. The opener, Harland's "I-10," had viewers' heads bobbing and feet tapping with its quick-shifting, ever-building dynamics. In contrast, Parks' "Bijou" pleasantly evoked a relaxed, bluesy down-home feeling.

This proved to be a day of highlights. It started with a truly great performance by the Next Generation Jazz Orchestra, the contingent made up of the some of the best high school players in the country, and attesting to MJF's mission to provide scholarships through competitions.

This was a swinging, percussive band, playing taught arrangements and showcasing solos by likely stars-to-be. Billy Strayhorn's "Blood Count" got the crowd's blood pressure up with Patrick Bartley's searing alto, while trumpeter Jack Spracht's solid contribution on the Redman-Rizat blues standard, "Baby Ain't I Good to You," had listeners up and fully engaged. Hope Flores had her moment on a steamy vocal on Irving Berlin's "Cheek to Cheek."

Redman, McCaslin and pianist Benny Green, all alumni from the MJF program, came on to contribute, ending up-front in a cutting session on Ellington's "Duke's Place."

It was old-new again as the concert started back in the fifties with a tribute to the historic Columbia Records collaborations between arranger Gil Evans and trumpet legend Miles Davis, Miles Ahead (1957), Porgy & Bess (1958) and Sketches of Spain (1960). Conductor Vince Martinez took the old charts and explored some new ground.

Sometimes ad hoc orchestras, such as this was, seem hastily assembled, with little rehearsal time. Not this ensemble of name players; it was well-prepared and captured the essence of Evans' transcendent charts. Under the care of this group, these dormant pieces became active, vivified by the tour-de-force performance of trumpeter Terence Blanchard, who stood in for Davis but did his own thing, reaching into the stratosphere with amazing runs. His take was hotter than Davis' and just as great in its own way. 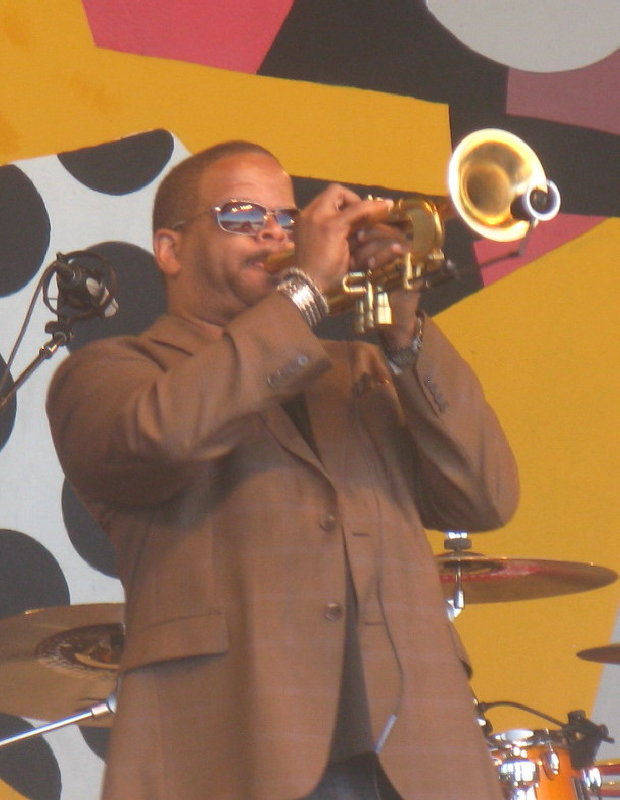 Blanchard came on full-force in "It Ain't Necessarily So," and then soared higher as the orchestra took off into Sketches and Rodrigo's delicately shimmering "Concierto de Aranjuez." Adding flourish to the march sequence in "Saeta," Martinez brought in a contingent from the New Generation Orchestra, parading along back stage.

At the set's end, there was prolonged audience appreciation. Some, unfamiliar with Evans' work, were shaking their heads in wonderment over the music.

Earlier that afternoon, legendary record producer Orrin Keepnews, 88, was interviewed in Dizzy's Den. He was the owner of Riverside Records and an early producer of pianist Thelonious Monk. Alluding to the 1956 recording of Monk's groundbreaking Brilliant Corners, he said this was Monk's first effort to be taken seriously. On the session was a young Sonny Rollins, just before his emergence on Saxophone Colossus (Prestige, 1956). On Sunday evening, this historical tidbit seemed most appropriate when Rollins, now 81, appeared as the final act, closing this year's festival.

With guitarist Peter Bernstein replacing the quintet's recent trombonist Clifton Anderson, Rollins seemed energized from the beginning. He played a near two-hour, Bruce Springsteen-length set. And at the end, Rollins had the audience dancing to one of his trademark calypso tunes.

The group also included Rollins' bassist from the sixties, Bob Cranshaw; percussionist Sammy Figueroa; and drummer Kobie Watkins. Always forceful and seemingly indefatigable on his tenor, Rollins took solos which sometimes went on, ever creatively, for some 10 minutes. He was also fully involved when the others had their turns, roaming the stage and punctuating Cranshaw's solos, jamming beside Bernstein, and trading fours with Watkins and Figueroa.

Rollins also had his signature way with ballads. He took a song, picked his way through it, extracting bits and pieces, and stretching his improvisations until they reached that "ah-ha" moment, when the melody gloriously breaks through. He did this with Franz Lehar's operetta classic, "Yours Is My Heart Alone," and the Fields' "They Say It's Wonderful."


The Jazz Gallery and Afterthoughts

Every year, The Jazz Gallery is the place to hear new, interesting and cutting-edge pianists. This year was no exception.

New York-based pianist Helen Sung proved her chops with an edgy take on Monk's, "In Walked Bud," and validated her creativity on an impressionistic original which branched from composer Philip Glass' film score for the 1982 film Koyaanisqatsi." She was backed by the masterly Marvin "Smitty" Smith on drums and the always animated Reuben Rogers on bass.

The very original and talented Bill Carrothers performed on Saturday night in the Gallery. A dazzling stylist, the Michigan pianist delivered a most impressive memorial to a friend, "Church of the Open Air," marked by an appealing dissonance and aided by the swirling drum patterns of Bill Stewart.

Sarah Wilson was also impressive—not a pianist, but an exceptional singer-songwriter and solid trumpeter. She had a fetching manner with a song—straightforward, with no frills—sort of a Nellie McKay without the attitude. She was ably assisted by drummer Matt Wilson, and his inventive drum kit which could master any special effect required. The group was delightful, exchanging hot licks on trumpet with violinist John Schott.

While the sounds of music fill the air, so do the smells of international fare wafting from the food stalls on the grounds. Not only do the patrons get their fix from the music, they fill their bellies with everything American from corn on the cob and hot dogs to barbecued ribs and tri-tip. Indian curries can be found, as well as Ghanaian-style salmon and chicken. Desserts range from ice cream and gourmet popsicles to old-fashioned cobbler and strawberry shortcake.

If music and food don't fill you up, then you can shop till you drop at a large variety of stalls featuring jewelry, hats, clothing, African imports and art. Of course, if you need more music, thousands of CDs are also on sale. Indeed, a sensory feast in Monterey.