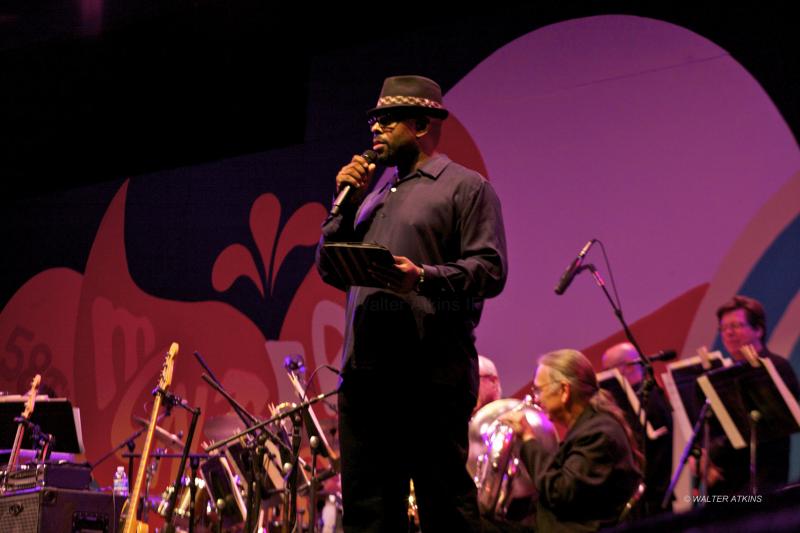 By Josef Woodard
October 2, 2015
Sign in to view read count

Monterey Jazz Festival, at 58, is still a fine model of how to present a jazz festival which pays respects to all the many branches and legacies of jazz, from the historicist perspective to more adventurous artists on the current scene.

Try as one might to just take the venerable but vibrant Monterey Jazz Festival for its immediate, present-tense and face value pleasure, historical angles keep filtering into the event, intentionally and otherwise. For this year's big, multi-staged jazz meeting at the Monterey Fairgrounds, celebrated its 58th birthday (and born in 1958, a numerical synchronism), and number-nerds will recall that last year's model had a 57/75 resonance, between the festival's 57th anniversary and the Blue Note Records 75th anniversary being toasted.

Perhaps the strongest in-house historical aspect of the 2015 Monterey Festival involved an artist who is all of 33, but whose link to the festival goes back over half his life to high school days as a prodigious young trumpeter-to-watch. The unique and forward-thinking Ambrose Akinmusire has appeared in Monterey several times in different settings during his current life as a prominent jazz artist on the global scene, but this year's visit was two-fold: a hot, heady set with his quart in the Night Club venue, and a high profile moment as this year's recipient of the festival's annual commissioning tradition.

Akinmusire was more than up to the challenge of coming up with something fresh and substantial, as he unveiled the intriguing chamber jazz piece "The Forgotten Places," for his quartet "+ 5" from a classical perspective, plus limber vocalist Theo Bleckmann (who appeared on Akinmusires' last album, The Imagined Saviour is Far Easier to Paint, on Blue Note). "The Forgotten Places," like former commissioned artist Bill Frisell's memorable suite "Big Sur," Akinmusire's new music is something of a double tribute—to Monterey and also to the remote Big Sur property, the Glen Deven Ranch, where commissioned artists can stay to write in an undistracted, idyllic retreat setting. What resulted was a glorious and fairly meditative work, with atmospheric sonorities weaving between chamber-esque structured sections, and only passing interest in expression of the virtuosity that the trumpeter is capable of unleashing (he saved that for his Night Club set later on Saturday night).

From a very different historical vein, this year's festival opened with a fascinating tribute to Erroll Garner's classic Concert by the Sea album, subject of a respected reissue in its 60th anniversary year, and which was recorded in nearby Carmel, a lovely coastal town neighboring the Monterey Bay. For the Monterey tribute, Garner-isms met with fresh-minded interpreters, including music director Geri Allen, Christian Sands, and, most impressively, the innately history-hopping Jason Moran.

In the late slot on opening night, a different kind of tribute hit the stage, with the dazzling project "Jaco's World," a big band paean to the late, great Jaco Pastorius, led and arranged by Vince Mendoza. Ironically, Pastorius didn't get much love from Monterey during his strong years of the '70s, when the festival director Jimmy Lyons steered away from music of the "fusion" or left-leaning sort: one can imagine him on this legendary stage, turning in a "Hendrix at Monterey"-like wonder to the tune of his famous mischievous wizardly "Slang" solos. But history wouldn't have it.

"Jaco's World," clearly a festival highlight, was a set fortified with vivid reminders of Pastorius' sensitivity and mastery as a composer, with "Teen Town," "Liberty City," "Slang/Punk Jazz," "Havona" in the mix, and a slight detour, from Joni Mitchell's Mingus project, "Dry Cleaner from Des Moines," with guest vocalist Tierney Sutton nailing it, as usual. Soloists included Pastorius big band alumnus Bob Mintzer on tenor sax, bassist Christian McBride, and an organically virtuosic turn from the bassist's son Felix Pastorius , a real, genetic link to the man of the hour.

Overall, the festival, under inspired artistic director Tim Jackson's wise, idiomatically ecumenical watch, is a fine model of how to present a jazz festival which pays respects to all the many branches and legacies of jazz, from the historicist perspective to more adventurous artists on the current scene. Big names on the roster included a fruitful visit by artists-in-residence Jazz at Lincoln Center Orchestra, sounding, expectedly, like a clean-burning paradigm of what a big band should be. They roamed the fairgrounds in various contexts: leader Wynton Marsalis appeared as guest with the young Next Generation big Band on Sunday afternoon, while smaller ensembles led by saxophonist Walter Blanding and bassist (a formidable one at that) Carolos Henriquez played sets in the smaller Dizzy's Den venue, also the site of a jam session open to the many strong young players on the grounds—also a part of the Monterey festival tradition.

On a much more minimal front, the dynamo duo of Chick Corea and banjoman Bela Fleck (which some are dubbing the "Chick & Fleck show") showed up on the big stage, sounding hotter and more empathetic and mutually playful than ever. Corea also seemed even more dynamic than usual (is this guy really 74?) during a bold standards-stoking trio set with Christian McBride and Brian Blade. Dianne Reeves, who always seems at home and in synch at this festival, put in another of her moving, genre-morphing sets on the arena stage. She moved with uncanny ease, from "Stormy Weather" to her nostalgic original "Nine," and from "One More for the Road" (which she sang in the George Clooney film Good Night, and Good Luck) to the forgivably crowd-pleaser and crowd-interaction-maker "I Put My Lighter On." She left the stage with a sweet benediction: "may God increase your territory."

On the downside, the closing act by Chris Botti was a show biz-y anticlimax. Botti is, in fact, a good trumpeter, but it's hard to tell given his shameless addiction to shtick and a harsh, goopy reverb soiling his tone. He seems nervously fixated on the task of keep the audience entertained, of working against the presumed tedium of a conventional jazz concert, piling up medleys instead of letting the music breathe, and ushering out attractive musical guests of questionable relevance. Officially, his set, and thus the festival, ended with "My Funny Valentine," sans improvisational insight or warmth.

There's a new incarnation of the Monterey Jazz Festival on Tour road show in town (coming soon to a city near you, on tour in 2016), and it's an especially strong assembly of players—powerhouse trumpeter Nicholas Payton, tenor saxophonist Ravi Coltrane, pianist/music director Gerald Clayton, drummer Justin Brown and bassist Joe Sanders, with sturdy vocalist-guitarist Raul Midon supplying the more pop-inclined/vocal element in the blend.

Off to the left of the mainstream offerings and the arena stage spectaculars, there was much to be savored, including thoughtful (and thought-fueled) guitarist Kurt Rosenwinkel, agreeably R&B-fired trumpeter Theo Croker, and vocalist Lizz Wright's impressive new musical statement (with a surprisingly rethought and deep take on Roberta Flack's "First Time Ever I Saw Your Face").

Landing yet higher on the list of "side" venue ecstasies was the Sunday evening set by Rudresh Mahanthappa's Bird Calls band. The alto saxophonist's post-hard-bop language, flavored by Indo-Jazz spices and jolts of abstract thought—the stuff which has made him a critical favorite in recent years if not a necessarily commercial one—was in high form this night at the Night Club venue. His empathetic group features rising pianist Matt Mitchell, fast-on-his-feet and buzzing with ensemble mindfulness, as well as , and it is an empathetic bunch, responding to the suggestions put forth by a given soloist. It is also one of those artistically functional inside-outside ensembles, blessed with internal listening and self-energizing powers, and with an enigmatic poet/force as leader.

In the tradition of the "each to his own" subjectivity of tastes when it comes to jazz that matters, I would like to opt for the early Sunday night encounter with Bird Calls as my grand finale memory for Monterey 2015, an altogether impressive addition to this great festival's ongoing history/story.