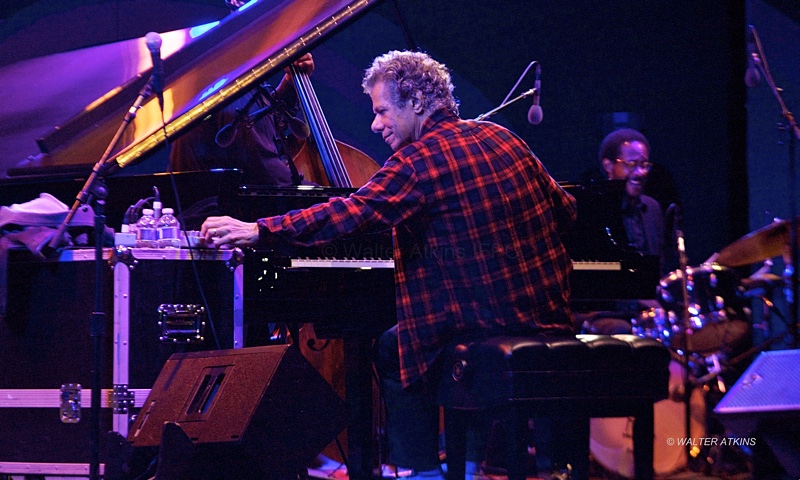 By Walter Atkins
October 2, 2015
Sign in to view read count

The 58th edition of the storied Monterey Jazz Festival continued its long tradition of bringing its rich blend of both venerable and new artists to the historic Northern California venue.
—Walter Atkins

Friday's opening day weather for the festival was warm and clear-tailored made for hearing live music on MJF's seven stages. The late evening brought a chill that required an extra layer or two to stay comfortable.

This year, the Monterey Jazz Festival chronicled a key event in jazz history that also involved its founder, James "Jimmy" Lyons. In September of 1955, the Erroll Garner Trio with bassist Eddie Calhoun and drummer Denzil Best performed at the Sunset School in nearby Carmel. Radio personality and promoter Jimmy Lyons, who would later establish the long running MJF, had not arranged to record the concert. However, an avid Garner admirer had set up his home quality tape equipment for the event. The impromptu live recording proved to be a massive hit for Garner and his record company. It was released as Concert By The Sea (Columbia, 1956) the following year. The album's impact had been far reaching and still influences musicians to this day.

To commemorate the 60th anniversary of Garner's top selling live album, Geri Allen paid homage to the dazzling pianist and composer of the spell binding ballad "Misty" with her Erroll Garner Project: Concert By the Sea. Fans relaxed in the freshly sodded Jimmy Lyons Arena and helped Allen celebrate Garner's timeless musical virtuosity and spirit. Famous jazz lover Clint Eastwood kicked off the festival with his introduction of the EGP. The adept group consisted of: pianists Allen, Jason Moran and Christian Sands; guitarist Russell Malone, bassist Darek Oles, and drummer Victor Lewis. It was a sensational display of musical craftsmanship and flair.

When bassist Oles was asked to comment on the original album, he said, "Loved it. Miraculous. What a great performance. He (Garner) didn't know he was being recorded until after the concert. No pressure from the record company. It was spontaneous playing. Makes the performance more stronger. He was not worried about the tape. If he knew, he would be concerned about mistakes. It was a "perfect concert." Oles added he "listened to it many years."

Guitarist Malone commented, "It was great, always swinging. He "didn't have to listen to it a lot. Got it immediately." Sands added, "It possesses so much vocabulary and history-so many styles. In the intros you heard tons of history. His playing tells what's going on in the world. He was influential." At the beginning of the performance Allen stated, "jazz is really invigorating" and "in re-creating the concert... hope you enjoy it." Allen's Erroll Garner Project brought the enduring legacy of Concert By The Sea forward for new generations of jazz devotees to hear and savor. Somewhere, Jimmy Lyons is smiling warmly.

Among her many tunes, Aimee did a surprising and entertaining version of the Doors' classic "People Are Strange." She also did her interpretation of "Love Me Or Leave Me" that was recorded by both Nina Simone and Billie Holiday. According to Aimee, "her version is faster." "I'm In The Mood For Love" was performed with her bassist. She also included the Michael Jackson cover "Off The Wall," a mega hit for the Gloved One. Duke Ellington's composition "Caravan" also received Aimee's stylish treatment. The fun and fresh evening show was a delight to hear.

Jaco's World: A Celebration Of The Music of Jaco Pastorius was conducted by six time Grammy winner Vince Mendoza and featured: Will Lee, Christian McBride, son Felix Pastorius, Peter Erskine, Alex Acuña, and many others. McBride saw double duty as host and guest musician for the dynamic and inspirational tribute. The four- time Grammy winning bassist came out after the first song and noted that Jaco had "pastor" in his name. He asked the patrons to "pull out your Bibles and celebrate Brother Jaco."

The brilliant Pastorius, member of the jazz fusion mainstay Weather Report, was a well-respected bassist and composer with strong jazz, Afro-Cuban and R & B roots. Vocalists Tierney Sutton and Sonny Knight & The Lakers contributed to the impressive all star big band sound that filled the night air with Jaco's wondrous rhythms. "Teen Town," "3 Views Of A Secret," a funky "Come On Come Over" and "Fanny Mae" were just some of the Pastorius songs heard during the concert. The set was spectacular in scope and power.

Former Weather Report drummer Erkskine, along with percussionist Acuna, helped provide the band's sonic propulsion. During the band's tantalizing sound check, Darlene Chan with Festival West kindly provided the song list. The night's powerful performance was a testimony to the artistry and energy of the late Pastorius. Jaco's World: A Celebration Of The Music of Jaco Pastorius was a living testimony and a perfect way to close out opening night at the MJF.

There was exciting news for jazz fans everywhere online. The Emmy winning producer Frederick Smith Jr., founder and president of All Music Television Network, was launching "Live From the Blue Whale," a new weekly 30-minute music television series on September 20, 2015. Beer and jazz connoisseurs had a treat at the festival. North Coast Brewery, one of the local beer vendors, proudly featured a Belgian Style Abbey Ale named Brother Thelonius, after the iconic pianist Thelonius Monk.

It takes a small army of people to put on the festival every year. The MJF staff included dedicated volunteers like Tad and Debi, regulars who had worked the festival for 25 years at the Jimmy Lyons arena. Long time marketing associate Timothy Orr shared some stories about unforeseen things coming up during the festival. One time, some fans who won a radio station ticket contest merrily showed up at the festival gates. Unfortunately, the MJF staff was unaware of these winners. Arriving at different times, they all presented valid letters that stated they were the ticket owners. With help from the reliable staff, he worked smoothly to accommodate the unexpected guests. All in a days work at MJF.

Saturday's weather was even better than the previous day's terrific offering. It was warmer during the day and the evening didn't require extra layers.

For his third appearance at the MJF, Trombone Shorty and Orleans Avenue packed the Jimmy Lyons Stage. Fueled by a scintillating mix of funk, hip hop, soul and NOLA flavorings, their brass driven sound moved the house throughout the exuberant session. Shorty and OA flat out rocked the main stage with the lively band in full throttle.

In her MJF debut at both the Jimmy Lyons and Garden Stages, young power house vocalist Nikki Hill was absolutely electric. So much soul, blues and gospel vitality was contained in one unstoppable musical source. Fortunately, Hill effortlessly directed her passion into singing with authority and solid showmanship. Her feisty interpretation of "Saved," popularized by LaVern Baker, had people standing up and parents dancing with their kids.

While enjoying a Gyro at the food court, a friendly couple from Cologne Germany shared my picnic table. This was their first MJF event and they were giddy with excitement. Both had attended the North Sea Jazz Festival 30 times and the Berlin Jazz Festival 25 times. The two met a local German citizen and he offered them his home in Carmel during the festival. Also shared the table with two seniors from the Road Scholars, a social group focused on providing people 55 and older with fun active events. The talkative women generously offered two tickets to the next Arena concert, which I passed on to friends.

Seasoned Hammond B-3 master and guitarist Lucky Peterson skillfully lit up the Garden Stage with his authentic R and B music. The engaging Peterson delivered his delicious style of earthy blues to a lively Garden gallery that held on to every note. Under his direction, the receptive listeners "raised the roof" and waved their hands to his infectious sounds. SF businesswoman Alma Jackson and family had attended MJF for 15 years. This was the family's first visit in several years. Mrs. Jackson said she "enjoyed the festival very much, especially Lucky Peterson," who went into the night audience playing a funky "Johnny Be Good."

The accomplished Etienne Charles and Creole Soul took over the Garden with his laid-back band blowing insouciantly into the warm NorCal evening. Charles then took the conga stand while his scorching saxophonist took center stage and the guitarist worked out. The alto sax was tearing up the spot on "Roots." Charles slowed it down for the soothing ballad "Turn Your Lights Down Low" with a mellow reggae flavor. "Lights " was one of his favorite songs" from the great Bob Marley. He also played "You Don't Love Me" and "Creole" the title track from his latest album Creole, (Culture Shock 2013). Charles said, "Calypso is easiest dance to do. No crane holding you down." People started to move in the open air venue.

After the solid set, a young woman and her fiancé came up to Charles and said he was a very important part of their day. The young man had proposed to her this day and she would always remember this moment. Charles gave her one of his Creole Soul Tour buttons as a "wedding present."

The 2015 Monterey Jazz Festival continued its legendary tradition of bringing the best of jazz artists and emerging young lions to its multiple stages. It is a musical as well as a social experience that can be enjoyed by first time attendees or regular MJF patrons. Mr. Lyons long-term project is in very capable hands.