Denzil DaCosta Best was an American jazz percussionist and composer born in New York City. He was a prominent bebop drummer in the 1950s and early 1960s.

Best was born in New York City, into a musical West Indian family originally from Barbados.[1] Trained on piano, trumpet, and bass, he concentrated on the drums starting in 1943. Between 1943 and 1944 he worked with Ben Webster, and subsequently with Coleman Hawkins (1944–45), Illinois Jacquet (1946) and Chubby Jackson. The drummer was known to sit in at Minton's Playhouse.[2] He took part in a recording with George Shearing in 1948 and was a founding member of his Quartet, remaining there until 1952. In 1949 he played on a recording with Lennie Tristano and also recorded later with Lee Konitz.

In a 1953 car accident he fractured both legs and was forced into temporary retirement[3] until 1954, when he played with Artie Shaw, and then in a trio with Erroll Garner (1955–57). Best subsequently played with Phineas Newborn, Nina Simone, Billie Holiday and Tyree Glenn, and in 1962 appeared on the first release by Sheila Jordan. He suffered from paralysis after this and was no longer able to play; he died aged 48 in 1965, after falling down a staircase in a New York City Subway station. 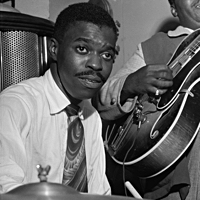 All About Jazz musician pages are maintained by musicians, publicists and trusted members like you. Interested? Tell us why you would like to improve the Denzil Best musician page.