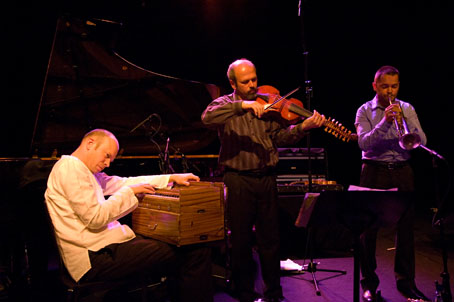 Located on a large fjord, Molde's weather is moderated by its proximity to the ocean, about 30 kilometers away. There are some dramatic changes, however, with weather systems moving in and out so quickly that the old saying, "you don't like the weather? Wait five minutes," is more than just an adage, it's the truth. Dark clouds can move in quickly, drop rain on the small Norwegian town for ten or fifteen minutes, and then be gone just as fast—leaving the sun shining and the dramatic clouds that often cover the tops of the surrounding mountains gradually dissipating.

But weather doesn't seem to be a deterrent for Molde Jazz fans. A long line-up waiting to get into the Molde Domkirke for singer Kristin Asbjørnsen's 6:00 PM show—in the town church that was rebuilt after the original wooden structure was destroyed during bombing in World War II—was a balanced mix of prepared patrons with hoodies and umbrellas, as well as those without any protection at all, standing in the line as if nothing was happening, even as the rainfall intensified.

Earlier, the weather was just fine for the festival's daily kick-off. Jazzlogen—a 70-piece group of young musicians eager to learn how to play jazz, New Orleans style (and already doing so very well)—along with a group of dancers from Studio 1 bringing up the rear, played some terrific old-style jazz. Marching down the street from the Quality Hotel Alexandra to the town center, a large crowd of festival-goers followed them as the various kiosks opened for the day.

And it doesn't take long for the free shows that run in various locations throughout the town to get started either. The ticketed shows typically start at 4:00 PM and run until a little after midnight but, like its larger sister festival in Montreal, Canada, Molde Jazz is a festival where it's also possible to spend the entire week catching some terrific music without spending a penny...or, in this case, a kroner. Chapter Index
Christian Wallumrød Ensemble with Arve Henriksen

As this year's artist in residence, trumpeter Arve Henriksen is putting on some shows where, despite a firmly collaborative nature, he's still the clear leader. In other cases, like tomorrow's Supersilent performance, he's part of an egalitarian collective. But for the third in his series of shows, he turned the reins over completely to pianist/composer Christian Wallumrød. Henriksen is the only constant in Wallumrød's ECM-documented ensembles of the past dozen years, beginning with the trio disc No Birch (1998), followed by the four-piece group responsible for Sofienberg Variations (2003) and A Year from Easter (2005), and, most recently, the sextet heard on The Zoo is Far (2007). For his afternoon show at the Forum, Wallumrød reconvened the quartet, also featuring violinist Nils Økland and percussionist Per Oddvar Johansen

Rather than coming in any direct way from jazz, Wallumrød's music has closer ties to classical chamber music and, in an oblique way, Norwegian traditionalism. Improvisation is an element, to be sure, but it's just as often in the interpretive approach to playing the pianist's scored parts as it is more liberated free play. Still, there were plenty of both in a performance that was largely cerebral in nature and often pensive in tone, yet surprisingly dramatic—due, more often than not, to the ensemble's incredibly nuanced dynamics, making even the slightest shift bear great power.

Wallumrød often used deceptively simple motifs, skewed slightly to provide a more abstruse perspective, and made exceptional use of the piano's sustaining pedal to create ethereal backwashes of color. These washes were often so subtle as to be felt more than heard, providing the perfect subliminal context for Økland, whose roots in contemporary classical music and the folk tradition seemed seamlessly melded; driven by a touch so delicate as to be barely audible, or so aggressive that it dominated the group's larger soundscape. Økland—whose recent Monograph (ECM, 2009) explores his instruments' broadest possibilities in the spare setting of solo recital—played both hardanger fiddle and viola d'amore, violin-like instruments with sympathetic strings positioned underneath those that are played, resonating to create a richer sound. A master of nuance and lyricism, but equally an expert at microtonality, he meshed beautifully with Henriksen's equally broad textural range.

Leaving behind the electronics entirely for this all-acoustic performance (even the miking of the group was minimal), Henriksen used nothing more than his instruments, embouchure and, very occasionally, his voice to contribute colors ranging from his shakuhachi-like tone to those more closely resembling conventional trumpet—and yet others resembling neither. By utilizing all kinds of nonconformist techniques that combined with similarly unorthodox approaches from Wallumrød, Økland and Johansen, the resultant group speak expanded beyond the reach of a typical small ensemble into near-orchestral possibilities. Johansen, whose drum kit was augmented with a variety of tuned percussion that he bowed, plucked with his fingers and more, was equally attuned to finding ways to turn this quartet's sound into a larger landscape, all the while using this larger palette in service of Wallumrød's detailed writing.

With the slightest dynamic shift resulting in profound power, when the ensemble actually went at their instruments hard its sound became almost impossibly huge for a group so small. Wallumrød, who used a variety of prepared piano techniques as well as a toy piano, shifted to harmonium twice during the performance—most notably on A Year from Easter's "Lichtblick," where he drew together sonically with Økland and Henriksen for a György Ligeti-informed piece of microtonality that became increasingly potent as the three orbited around each other in close proximity. Henriksen utilized a different mouthpiece on his trumpet, allowing him access to notes so pure and high that the overall sound resembled the shrill, dissonant middle section of Ligeti's 1961 composition, "Atmosphères," made famous in the soundtrack to director Stanley Kubrick's groundbreaking 2001: A Space Odyssey (1968).

A key definer of this group was its avoidance of stereotypical roles. Johansen could be heard contributing melody on a bowed saw while Wallumrød's toy piano created a harmonic context, over which Økland might scrape a string of his viola d'amore with his nail to create an unexpected rhythm as Henriksen did the same thing by tapping the valves of his horn. Almost as sleight of hand, roles shifted as Johansen, moving to xylophone, began to play a delicate "Bo Diddley" rhythm (eliciting a gentle smile from Wallumrød) as the pianist quickly moved to match it, with Henriksen and Økland shifting to more contrapuntal roles.

Though the music could become unexpectedly dense—especially during some of the more boldly improvised segments—it remained surprisingly delicate for the most part. And with economy and careful attention to space as constant markers, Wallumrød's ensemble may be the closest thing ECM has to a contemporary group that embodies the phrase used to describe its early music: "The most beautiful sound next to silence."
Kristin Asbjørnsen

In sharp contrast to Wallumrød's more obscure but obliquely beautiful music, singer/songwriter Kristin Asbjørnsen's 90-minute set was considerably less challenging, but no less appealing for it. Asbjørnsen has been on the Norwegian scene for over a decade, with groups including the all-vocal Kvitretten and pop group Dadafon. She was also a guest of the Nymark Collective—which featured pianist Tord Gustavsen, whose three albums for ECM including Being There (2008) have brought him international attention—for Bessie Smith Revisited: Live in Concert (Independent, 2008), an album which demonstrated her not inconsiderable diversity. But it was her 2006 release Wayfaring Stranger: A Spiritual Songbook (Univeral Norway) that not only solidified her hold in Norway, but garnered her greater acclaim abroad as well.

Asbjørnsen's performance in front of a capacity crowd of over 700 at Molde drew from Wayfaring Stranger and her recently released The Night Shines Like the Day (Universal, 2009). Bringing the same group as The Night Shines—Gustavsen (who also sang backup), guitarist/vocalist Olav Torget, whose Urban Jive (Echofisk, 2008) was a very promising debut, cellist/bassist Svante Henryson, lap steel guitarist/vocalist Jostein Ansnes and percussionist Knut Aalefjær—Asbjørnsen established the tone early on. A beautifully paced set that may have focused on Asbjørnsen's rich, ever- so-slightly raspy voice which possessed just a hint of world-weariness, it also provided plenty of opportunity for everyone in the band to shine.

Asbjørnsen's predilection for soulful delivery was perfectly matched by Gustavsen, whose own albums have eschewed conventional Nordic cool for a warmer approach that possesses an unmistakable affection for the gospel music of the American south. Despite a considerably distanced musical context, Gustavsen's performance with Asbjørnsen was most impressive for just how much in evidence the voice that has gradually emerged on his own recordings remained. With a touch, at times, as delicate as a whisper but elsewhere bolder in keeping with some of the material's more energetic demands, Gustavsen was working within strong frameworks, yet clearly had the freedom to interpret within them. Ansnes' lap steel added a defining color to the group, but he was an even more impressive acoustic guitarist and particularly striking backup singer, leaving Asbjørnsen free to be more liberal, while empathically synching with her languid, behind-the-beat phrasing.

Torget was also striking, playing the African konting on songs that, with Aalefjær's hybridized kit of drums and assorted percussion playable by sticks or hands, often demonstrated at least a hint of African polyrhythmic influence. A sympathetic ensemble player, Torget rarely soloed, but his few features demonstrated no shortage of invention within a pop/folk context. Henryson, who'll be appearing with Arve Henriksen, Jon Balke, Terje Isungset and dancer Therese Skauge on Molde Jazz's final day at a curious early morning outdoor performance, was a charismatic cellist, possessing a singing arco and pizzicato style that reached deep into the instrument's lower register to substitute for bass on many of the songs. He was also a lithe electric bassist, with a robust fretless tone and loose way of working the pulse that didn't just anchor the more up- tempo songs, but made them dance.

While Asbjørnsen stuck with many of her album arrangements, she did extend some of the material—and not just by adding solos, although Henryson did deliver one of prodigious technique at the beginning of the waltz-time and, on record, exceedingly brief "I'm Too Heavy Now," where he punctuated his appealing melodic lines with visceral glissandi.

But as impressive as the musicians with whom she chose to surround herself were, attention remained largely focused on Asbjørnsen. Avoiding the excessive trappings of post-American Idol melisma, she chose her moments carefully to turn more expressive, the result being expanded and more dramatic versions of "Trying to Get Home," "Ride Up in the Chariot" and the graceful encore, "There's a Balm in Gilead." Well-established in Norway and with a star already on the ascendance in Europe, based on her albums and Molde performance, Asbjørnsen's personal approach to working both original and cover material makes her as an artist deserving of exposure on North American shores as well.