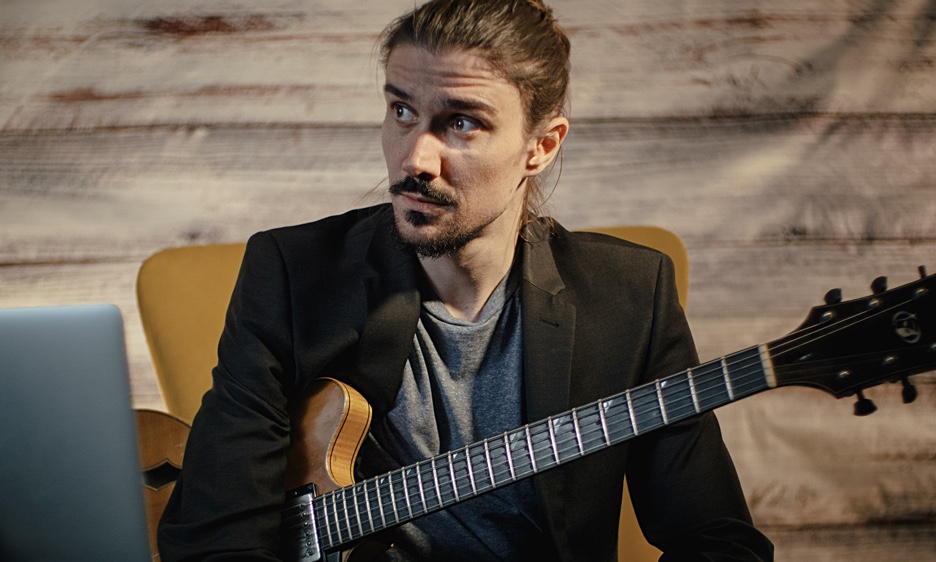 The musical universe of Montreal-Canadian guitarist Oli Astral (Olivier Grenier-Bédard) is a fusion between the sound of modern jazz guitar, digital music technology, and visual projection. At 32, Oli Astral embarked on the adventure of From the Astral (2022), his first album as a leader. The latter is an active member of the Montreal group LEAF, whose eponymous debut album was released in 2017. Olivier Grenier-Bédard is the recipient of prizes and distinctions such as the Audience Award in the La Musique Change Des Vies competition (2015) organized by the Montreal International Jazz Festival and the Audience Award (2019) at the Rimouski International Jazz Festival, as part of the LOJIQ Grand Prix with the groupLEAF.

Guitar. To be more specific, I guess I could say "contemporary jazz guitar." For my latest project, I also got involved with a few electronic devices (MIDI controllers) and computer sound design.

A few important teachers: John Abercrombie and Jonathan Kreisberg. My major influences Pat Metheny for his sound, George Benson for his playfulness, Glenn Gould for his precision in the recording studio, Mr. Bill for his imagination and Stephen Nachmanovitch for his book on improvisation: Free Play.

When I realized that my whole world happened in my head. Since I was very young, I have always been an introvert. As a teenager, I have always spent a lot of time with music: listening, improvising or composing. Music may seem like an imaginary world that a musician creates in his head, but to the musician, that world sometimes feels even more real than the real world...

In the album From the Astral, we fuse electronic textures with jazz. This approach comes from a desire for expansion I think. Human nature has always been about pushing boundaries further. You can study History, and you'll see that all the empires expanded their territories (Babylonians, Assyrians, Persians, Greeks, Romans, etc...). It seems like it's something deeply rooted in our "collective unconscious." And so it goes for Jazz. Miles' approach was about expansion. Herbie's approach is about expansion. In my case, I hope that I am trying to achieve some sort of "colonization of the digital universe " by a jazz musician. By "colonization," I mean that the musician is still "dominating" digital technologies. We use electronic textures to serve our imagination and to inspire us in our improvisations.

I always try to get to know my students and hopefully help them reveal who they are. Teaching should be inspired by Michangelo's idea of removing the surface of a stone to reveal a statue that has always been there. If my students are interested in jazz, I usually try to inspire them by showing them music and by helping them to learn the instrument. When I help them to learn the fretboard (all the notes on the guitar), I give them melodic lines or ideas that they can change. I believe that the creative process of making up their own lines is vital. They can transcribe, but as fast as possible, they should create their own ideas from what they get out of the transcriptions.

On drums, I would say Brian Blade, because of how powerful and spiritual his playing feels to me. On double bass, I would say John Patitucci. I really dig the Akoustic band (Chick Corea). I'm sure these two guys would have a lot to teach me ! I think I would also like to have Beethoven responsible for adding electronic textures to the compositions. I always wondered what classical composers would do with all the technologies that we have today.

I have two recordings..! I love them both, and I hate them both. I think it is very hard for a musician to look back at previous works. It's difficult to appreciate what you did in the past because you are always looking forward..! I just finished this album and I am already thinking about how I can expand my musical world with new ideas. We should learn to take a little bit of time to be more contemplative and grateful for having the possibility to record and publish our music...

I hope that people will feel that there is something personal in my music. As I said before, I try to "colonize" digital technologies. I think that this helps expand the "sound spectrum" of the band. With new textures, new sounds, it can bring the imagination of listeners to other places. I believe that the new generation of jazz musicians are trying to keep moving the genre in new directions. That's what I feel when I listen to modern jazz. The jazz community is doing a great job at keeping this music alive by exploring different musical paths !

I love cinematography! I have a DSLR camera, and I have been learning a bunch of stuff about filming in the past two years! My wife and I are doing our own video clips at home and this process really helped me to expand my ideas. That's why I decided to include a little bit of visual projection on stage for Oli Astral.

I don't remember! I didn't have to buy any, my dad had a huge collection!

I believe that a lot of great artists (both old and young) have brought jazz to such a high level. Players around the world are very good..! Also, Jazz has become very eclectic. There are a vast amount of subgenres that the listeners can check out. I think jazz has become very rich. But, here is where I believe there is a problem: the business model is in a transition phase. With the accelerated growth of the digital world, we need innovations in government policies to control the internet. If we don't come up with "political innovations" or "juridical innovations," I think it will be very difficult for younger artists to keep doing what they do to a high level.

Well... New government policies and a more fair internet for sure ! But also great teachers to share their passion and teach the tradition. Great artists to explore new musical paths. United Communities to support each other.

We will have the pleasure to play in a few places during the summer!In order to expand the sound of the trio, the band needs to play to see where the music leads us.

Since I started to play with digital technologies, I guess I would say my greatest fear is that the computer stops in the middle of the gig! But, on a deeper level, I am also afraid of not being in the present moment. We live in the era of perfection, and perfection is the antithesis of improvisation, in a way. Let's put it this way: Studio is for perfection and precision, and performances are for imperfection and spontaneity. First, the recording studio is a good place to really work on the "perfect version" of a piece, both in terms of execution and sound (mixing). It's the place to be very picky on everything. Second, live performances are more like life, and life is unperfect. So, to come back to the question, I guess my greatest fear is to forget to appreciate the imperfect beauty of live performances.

Since I heard Pat Metheny's Interview with Rick Beato, I enjoy singing "Happy Birthday." Pat pointed out how there is everything that matters about theme development in this simple melody. Readers should watch this interview!

My time is divided between teaching, playing, composing and working on my business (booking gigs, press releases, etc). It goes by phases. Sometimes, I get to teach more, sometimes I get to play more... There are many things to do, and I have to say that there are times when I don't touch my instrument that much...! Especially when I work on a press release all by myself! Fortunately, when I plan my finances well enough, I get the chance to immerse myself in my musical world for a little while... :-)

Anything that could involve the creativity of the mind. Maybe working on developing thermonuclear fusion at the ITER. Maybe writing a philosophy inspired by Jiddu Krishnamurti. Maybe working as a film director and painting the world like Wes Anderson does. As long as it's something that aims at healing the world using creativity. But seriously.... Music is the only true poetry and the only way to directly heal the soul...

Lao Tzu (between 500 BC and 300 BC), author of Tao Te Ching. Ancient Chinese philosophy is hard to understand from a western perspective I think. But I believe we can get a lot from it. During this dinner, I hope that Lao Tzu will be able to challenge the value-system of the society we live in. As a western musician, I think it's hard to be free of our desires and to just follow the natural path of where life leads us without pain. We need the willingness to act, we need to plant the seeds of our music in the world, and to believe in ourselves. But we also need to accept that outside forces are at work.

Who do you think you are in the world?:

I like to imagine different layers of identity for myself. I am a husband and a jazz musician, but also a teacher. I am a Canadian and a citizen of the world, but also a tiny part of the stardust that forms the whole universe. I believe that this multi-layer identity helps to overcome the difference between the people.