Marcus Roberts And The Modern Jazz Generation At The Kimmel Center 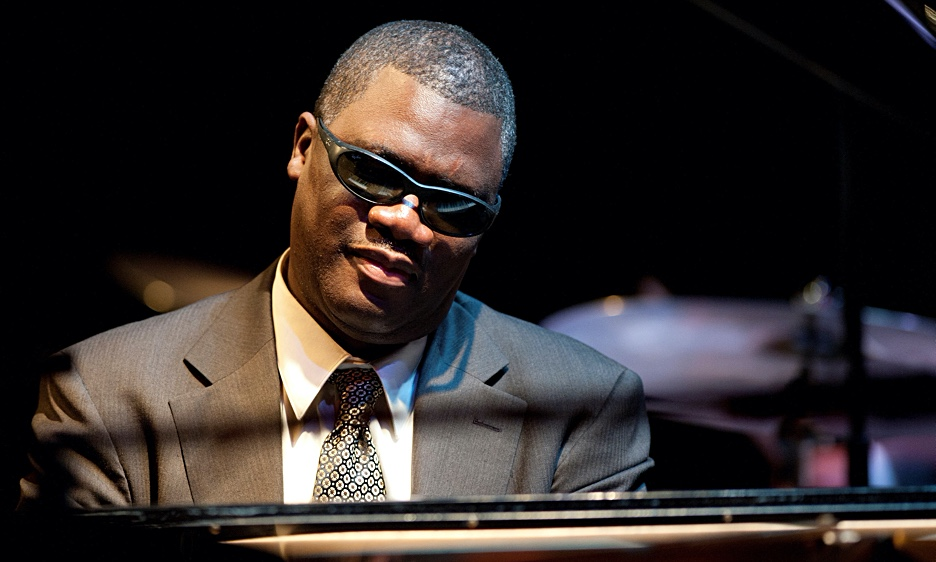 Marcus Roberts is one of the great jazz pianists of his generation, coming up in the 1980s in Wynton Marsalis' band and since then more or less following Marsalis' emphasis on playing jazz classics rather than heading in new directions. He has developed a solid track record on his own with his trio that includes Rodney Jordan on bass and Jason Marsalis on drums. In 2012, he assembled a "mentorship" band, the Modern Jazz Generation, bringing his trio along with both younger and more experienced musicians together in a big band format. In this concert, they performed two sets of compositions, mostly from the stride and swing eras, featuring excellent arrangements by Roberts and band members, as well as one by Oscar Peterson. In addition, two legendary musicians, trumpeter Charles Tolliver and pianist/composer/arranger Toshiko Akiyoshi, came on stage for one tune each, each adding something to the occasion which was wonderful and hard to put into words. The trio and the ensemble performed with great precision, careful attention to detail, and solo improvising that was artful and at times reaching for the moon of jazz expression and virtuosity.

The show kicked off with Cole Porter's "What Is This Thing Called Love?" in an upbeat version with drummer Jason Marsalis pounding out a Django Reinhardt "hot club" rhythm that gave the piece a special flair. The emphasis on jazz classics was carried forward by two Duke Ellington tunes, "Satan Takes a Holiday," arranged by saxophonist Joe Goldberg with a sharp baritone saxophone introduction by Tissa Khosla and a muted trumpet statement of the melody; followed by Ellington's "Blue Pepper" with a round of solos by tenor saxophone, trombone, alto saxophone, and trumpet. The arrangements were consistent with Ellington's use of combined sections, but Roberts' complex piano work far exceeded Ellington's minimalist approach and brought in an element of stride style.

Jazz Legacy Award winner Charles Tolliver, who has been at the center of jazz developments from Dizzy Gillespie through hard bop and beyond, took Billy Eckstine's "I Want to Talk About You" through some remarkable changes and improvisational variations with a lot of space that contrasted nicely with the band's density. He wore a Gillespie-type bohemian hat, perhaps a nod to the fact that Gillespie greatly admired his playing.

Next there was Roberts' original "Perfect Timing" that seemed like a facsimile of bebop with a brilliant arco (bowed) bass solo by Rodney Jordan. The set concluded with a straight ahead version of Thelonious Monk's "Blues Five Spot" with very fancy solo work by trombonist Ron Westray and trumpeter Marcus Printup.

Following the intermission, the band did a vamp style arrangement of Jelly Roll Morton's "Dr. Jazz" featuring bass and clarinet solos as in the original Morton recording, and ending in a rousing way with Dixieland style co-improvising.

The trio alone then took on Leonard Bernstein's "Jet Song" from West Side Story in an unusual arrangement by Oscar Peterson for his (Verve, 1962) recording of tunes from the show. Roberts executed a brilliant piano solo with the ingenuity that he can generate given an extended opportunity to do so.

Probably the most "modern" composition of the evening, Roberts' own "It's a Beautiful Night to Celebrate," approximated the Stan Kenton band and featured a trombone solo by Westray and intricate arpeggiated cluster playing by Roberts. Jimmy van Heusen's "Polka Dots and Moonbeams, in a pulsating rhythm of Westray's arrangement included some Zoot Sims-like tenor saxophone playing by Stephen Riley.

Before she came on stage, the tribute to Toshiko Akiyoshi began with her big band composition "Tuning Up" which started ingeniously with the band making those pitch-finding warmup sounds and then took on a Ray Charles type of R&B swing feeling. The tune featured classy solos by trombonist Vincent Gardner, trumpeter Tim Blackmon, and alto saxophonist Boyce Griffith. Then Akiyoshi herself came on stage, hugging Roberts, her relaxed easy manner belying the fact that she, coming from humble origins in Japan, has over the years made a huge and everlasting impact on jazz composing, arranging, and piano style. Her solo performance of her original "Winter Song," with its Asian inflections yet clearly in jazz tradition, rivaled anything by Keith Jarrett in its remarkable expression of the deepest of emotions. Just to hear her play with such subtlety and grace was a truly memorable experience.

The concert concluded with a heart-pounding big band version of Bud Powell's "Un Poco Loco" featuring an uncanny drum solo by Jason Marsalis, who throughout the evening provided the kind of disciplined rhythmic backdrop that could serve as a model for all percussionists.

Sometimes, in all honesty, it is distressing when a band adheres closely as it did on this evening to the swing era and does not venture into the mainstream of post-bop jazz, but the brilliance and enthusiasm of this particular group of musicians more than compensated for the lack. And the cameo performances of Tolliver and Akiyoshi lent something historic and soul- stirring to the event.