By VITALIJUS GAILIUS
October 16, 2019
Sign in to view read count 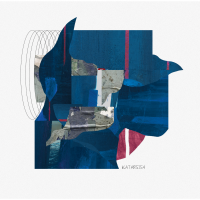 A young generation of Lithuanian jazz and improvised music has been blossoming for the last few years, and Katarsis4 could be taken as one of the best examples of those youngsters who are looking toward new sonic approaches by reshaping the heritage of the past and mixing it with their own ideas.

The quartets' eponymous debut album, released by the well-known Lithuanian record label "NoBusinessRecords," consists of fifteen compositions. All four guys—Arminas, Kazimieras, Algirdas and Danielius—are very well prepared technically and have rich imaginations. By using only saxophones and extended techniques, they are able to create dense sonic structures. But that is not enough; the quartet members step forward in more challenging ways by attempting to establish dialogue between saxophones and objects around them.

On "06:57am" a listener could hear a plastic singing tube; on "Canis Minor," a ping-pong ball jumping into a bowl sound and many more unusual instruments innovatively used by members of Katarsis4, who are ready to blow listeners' minds with enormously wide musical articulation.

Looking for comparisons, this Lithuanian quartet's debut might be compared with Die Milchstrasse Flockt album, released in 2018. On one hand, these recordings are different because the first is based on reeds and the second on percussion, but on the other hand the sonic aesthetic of both albums is very similar. Both collectives focus on a minimalistic acoustic approach, drifting toward drone/ambient style passages.

Despite the fact that the debut recording of Katarsis4 is mainly improvised, it is very harmonious. The mood is dreamful, sometimes a little bit nostalgic and melancholic. So, this album is not an example of raw and primordial improvisation in the style of Evan Parker or Peter Brötzmann. But no-one and nothing is perfect, including the quartets' album. While listening to this record, time after time, the feeling of coherence fades away. Transitions between different parts are sometimes not smooth enough to get fully into an uninterrupted sonic voyage. That is why this recording might be called the book of sketches occasionally.

But, notwithstanding the critique above, the debut album of Katarsis4 should be taken as positive, inspirational and a very promising voice of young-generation musicians who are shaping their own sound and expanding sonic boundaries. A bright future is around the corner for these four guys!