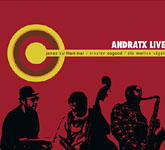 The Nordic jazz trio of Jonas Kullhammar, Kresten Osgood and Ole Morten V&#229;gan is the type of super group that keeps the jazz tradition alive, not in the sense of an institution as much as a provocateur praxis. Andratx Live is its second release following a self-titled record on Moserbie in 2007.

Recorded in May of 2008 in the jazz mecca of Sweden at the Glenn Miller Cafe in Stockholm, the atmosphere loosens up over its previous studio session. The crowd heard here certainly appreciated the trio's broad grasp of jazz folklore. With the opening "Snake City Rundown," a dedication to Kullhammar's hometown and especially Osgood's composition "The Two-Step," the image of Sonny Rollins is conjured as the band evokes the famous Village Vanguard sessions of 1957. Kulhammar's strapping tone is directed firmly by Vågan's precise and steady time-keeping and Osgood's overtly muscular drumming. The saxophonist is a disciple of the tenor madness of Rahsaan Roland Kirk, Eddie Harris and John Gilmore.

The most interesting tracks heard here are covers of Pharoah Sanders' "Farah" and Charles Brackeen's "Attainment" (heard as a bonus and only available on the CD). At nearly 13 minutes, the Sanders track is modeled after the playing of Albert Ayler, full of innocent and primitive shouts and gesticulations. Especially pleasing is how Vågan and Osgood keep the energy flowing and churning throughout. Brackeen's "Attainment," a 20-minute rendition, taken from the saxophonist's 1987 recording for the Swedish label Silkheart, is a masterful performance of muscular playing and African rhythms. And as they say, "the crowd goes wild."