An enduring presence for the last 30 years, saxophonist, composer and bandleader Michael Blake has built his reputation playing jazz and creative music in New York City. This visionary composer and arranger has produced a cornucopia of recordings that vary in context and mood. He has played tenor and soprano saxophone with a diverse range of artists including Lounge Lizards, Charlie Hunter, Henry Butler, Steven Bernstein & the Hot 9 and Ray Lamontagne.

Michael was born on May 19th, 1964 in Montreal, Canada. In the late 60’s his family moved across the continent to California’s Bay Area where the indelible sounds of Psychedelic Rock, Funk and Soul would have a huge impact on his young ears. After resettling in Vancouver, Canada, he picked up the clarinet at 14 and a few years later the tenor saxophone, studying both with David Branter, a disciple of renown saxophonist and teacher Eugene Rousseau. Michael credits his brother for bringing jazz records into the house and his parents for taking him to concerts where he heard Count Basie, Ella Fitzgerald, Benny Goodman, Read more

Michael Blake graduated from High School receiving the Music Award and enrolled in College. Disenchanted with school he cut his teeth at jam sessions and learned the music of local trailblazer, trombonist, pianist and composer Hugh Fraser. He formed his first group with fellow saxophonist Phil Dwyer and pianist Ross Taggart and freelanced in an array of bands. In 1984 & 1985 Michael participated in the Banff School of Fine Arts Jazz Program where we studied with bassist Dave Holland and saxophonists Steve Coleman and David Liebman. Michael received a grant from The Canada Council for the Arts to further his studies in New York City and relocated there in 1987.

His tenure with John Lurie and the Lounge Lizards lasted from 1990-1999 and includes numerous recordings, TV appearances, a live concert film and film soundtracks such as the Grammy nominated score for Get Shorty. During the ‘90’s he was a Composer in Residence in the Jazz Composers Collective and a member of Ben Allison’s Medicine Wheel. Flaunting a stellar cast of downtown musicians, Michael’s group Free Asociation portrayed his restless spirit for adventure, collaborating with rappers, dancers and using unconventional instrumentation.

Michael’s multifaceted process is quite evident on all fifteen of his records. His first release Kingdom of Champa is a beautifully complex reflection of post war Vietnam that earned him high praise and critical acclaim. Michael sites his sidemen, producer Teo Macero and engineer Scott Harding for bringing his vision to life. Every album since has proven to further highlight his mastery of creating kaleidoscopic music. Whether tackling an ambitious new score or facing jazz tradition head on, Michael’s saxophone always plays a center role in the mix. He takes a wily approach on every horn, favoring a variety of timbres that may evoke an elder, snap at a riff or blast off to the interstellar.

Michael has scored and arranged original music for film and television, big band and string ensemble. His work has been premiered and performed around the globe at major jazz festivals. He has received commissions from Chamber Music America, The Canada Council for the Arts, The Doris Duke Foundation and The BC Arts Council. He is a respected teacher and has conducted workshops and classes in the US, Canada, Mexico, Demark, Italy, Brazil and Thailand. He was on faculty at the Fondazione Siena Jazz Summer Workshop from 2009-2013.

You're Gonna Keep On Drinking? O.K., They'll Keep on Playing

"This is Our Music IV" Presents Bobby Previte, Michael Blake and...

"This is music unbound in time...perfectly executed" DownBeat - James Hale

"Not only is it one of the year's best jazz albums, but it's another gem in a career filled with them" Chicago Reader - Peter Margasak

"Saxophonist Michael Blake‘s 2016 release is astonishing, exploding with intricate details and unleashing one grand statement after the other. Everything about this album indicates a sound and vision steps ahead of the music of today." Dave Sumner, Bird is the Word

"This is music unbound in time...perfectly executed" DownBeat - James Hale

"Not only is it one of the year's best jazz albums, but it's another gem in a career filled with them" Chicago Reader - Peter Margasak

"Saxophonist Michael Blake‘s 2016 release is astonishing, exploding with intricate details and unleashing one grand statement after the other. Everything about this album indicates a sound and vision steps ahead of the music of today." Dave Sumner, Bird is the Word

"You can hear Archie Shepp and Lucky Thompson and Coltrane and Dewey Redman in Mr. Blake, and the group sounds great while playing what it wants to" The New York Times - Ben Ratliff

"Michael Blake is a New York-based saxophonist, once a member of the Lounge Lizards, and "Right Before Your Very Ears" (Clean Feed) is the forthright, off-the-cuff new album by his trio, with the bassist Ben Allison and the drummer Jeff Ballard. Some of it is completely free, some dependent on small written motifs; there's also a cover of Duke Ellington's lovely "Mount Harissa." It is rhythmic and nuanced work by a modern mainstream jazz musician playing free jazz as a choice; you can hear Archie Shepp and Lucky Thompson and Coltrane and Dewey Redman in Mr. Blake, and the group sounds great while playing what it wants to." The New York Times - Ben Ratliff

"The more refined Blake becomes as a horn player and recording artist, the more he learns about finesse. Ultimately Elevated is about his move towards gracefulness. This group is terrifically tight and as each piece presents itself, a great creative thrust is achieved. I haven’t spun a more perfectly titled disc in along time." Jim Macnie, Downbeat

"An astonishingly mature and original debut CD. The music here falls provocatively beyond categorization. It's Blake's concept, not his cast, that makes Kingdom of Champa so impressive. He has written a gorgeous, seven part suite inspired by a month long sojourn in Vietnam. A CD worthy of someone like Henry Threadgill - lofty company." Mark Miller, Globe & Mail

a) The fundamentals of sound - finding the right instrument/set up, articulation, phrasing, overtone exercises, saxophone basics.

b) Jazz techniques: the importance of enjoying what you practice, transcribing and ear training.

c) Harmony: concepts that provide clarity to the harmonic language of jazz. Patterns, triadic concepts and tritone subs are applied.

d) Melody: concepts that provide the player with a 'common sense' approach to playing a melody. Key signatures, phrasing and intervalic exercises are applied.

e) Rhythm: breaking down the phrase in any time signature. Simple patterns and repetitive exercises can develop into complex and infinite possibilities.

f) Musicians: solos that made jazz history and the ones that didn't - which are sometimes more important to study!

g) Composing: write something down everyday. Developing a distinctive voice on your instrument through the process of composing. 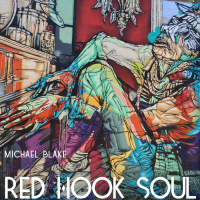 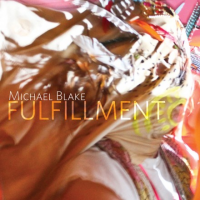 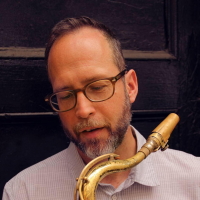 All About Jazz musician pages are maintained by musicians, publicists and trusted members like you. Interested? Tell us why you would like to improve the Michael Blake musician page.