When singer Natalie Cole was in college at the University of Massachusetts at Amherst, she performed weekends at nightclubs. Prior to one show, a small club displayed a sign that announced her only as Nat "King" Cole's daughter. She was so angry that she scolded the manager of the club; however, 20 years later, Cole reached the pinnacle of her success by "teaming up" with her late father in an album called Unforgettable With Love. The album earned seven Grammy awards and stayed on the pop charts for several weeks. For Natalie, it was a special tribute to her legendary father who died of lung cancer when she was only 15.

Natalie is one of five children born to the famous singer Nat King Cole and his wife Maria. Maria sang with Duke Ellington before marrying Nat. Natalie, their second child, was born on February 6, 1950. Cole told Working Mother that her childhood was filled with music that her mom and dad liked to hear as well as the music her dad sung. She said, "He never directed me away from any type of music, but it was the kind of music Dad made that's left a lasting impression on me." It did not take long for her to follow in his footsteps. By age six, she appeared on one of her dad's albums. At eleven, she performed briefly in a nightclub act. However, Cole claims her father died never knowing that she wanted a career in singing because she told him she wanted to be a doctor. He never pushed her into singing, as he wanted her to choose her own career. While earning a degree in child psychology from the University of Massachusetts, she realized that she wanted to sing.

Initially, Cole was filled with insecurity when she performed, not knowing if people liked her just because she was the Nat King Cole's daughter. This insecurity caused her to avoid performing the same type of music as her father, who was a big band, jazzy singer and an accomplished pianist in the fifties. He had several hit albums before rock music was marketed to the public. She told Ebony, "I spent the first part of my career rebelling against it {her father's music}. Always in the back of my mind I was trying to stay as far away from that stigma as I possibly could." After earning her degree, Cole toured local clubs with a band called Black Magic.

In 1974 she met two producers in Chicago, Chuck Jackson and Marvin Yancy, who wanted to write and produce an album with her. In 1975 Capitol Records released Inseparable, launching Cole's solo career. Lauded by critics, the album contained two singles, "This Will Be" and "Inseparable," which quickly climbed the pop and R&B charts. For her effort, Cole won a Grammy award for Best New Artist. While producing the album, Cole and Yancy formed a relationship that led to marriage in 1976. That same year she released Natalie. The single "Sophisticated Lady" reached number one on the R&B charts and number 25 on the pop charts. Thankful included the successful singles "I've Got Love on My Mind" and "Our Love" in 1977. In 1979 Cole teamed with Peabo Bryson and released We're the Best of Friends, another successful album with two hit singles. Her albums sold very well in the seventies—especially since her career was just beginning. However, her personal problems were escalating out of control and soon stalled her initial stardom.

In 1973 Canadian police arrested Cole for possession of heroin. Her problems with drugs did not end until ten years later, and she claimed that the majority of her drug use was in the five years after her son Robert was born in 1977. She also abused cocaine, prescription drugs, acid, and alcohol, admittedly not employing anyone who would not do drugs with her. When her marriage ended in 1979, she called the relationship "short but devastating." In 1983 she finally entered the Hazelden Foundation in Minnesota after a near-fatal car accident. She walked away from the crash physically unharmed but mentally shaken. She stayed at Hazelden for six months before emerging ready to live life drug-free. Every year on November 28, she celebrates the anniversary of the last day she did drugs.

She released an album every year from 1980 till 1985, but Cole did not reach the pop charts again until 1987, when she released Everlasting. This album included three singles that reached the top 20 on the pop charts. She also scored two hit duets with Ray Parker Jr. the same year. In 1989 she released Good to Be Back, which included the top ten hit "Miss You Like Crazy." That same year Cole met music producer Andre Fischer, who was a drummer for the band Rufus and for Chaka Khan. He wanted to work with Cole on her next album, but was also secretly in love with her. They married and began work on an album that was unforgettable.

Unforgettable with Love was released in 1991 to critical acclaim. Not only did Cole admit to being Nat King Cole's daughter on this album, she pledged her complete devotion to her father and his music. She even "felt" his presence while recording. Produced by her husband, the album included 20 songs from Nat King Cole's collection sung by Natalie. Singles included "The Very Thought of You," "Mona Lisa," and "Route 66." Her uncle, Ike Cole, appeared on "Route 66," but the most fascinating effort was "Unforgettable." With a little help from the masters of technology, Cole performed the song as a duet with her father using her father's original recording. The idea was unprecedented and the result was overwhelming. The album sold over five million copies and earned seven Grammy awards including Album of the Year. "Unforgettable" won both Record of the Year and Song of the Year. Billboard called the album's success "an almost complete anomaly in recent chart history—a massive hit album featuring music in a noncontemporary style." People gushed, "Like father, like daughter—when the subject is singing and the father was Nat 'King' Cole, the daughter is in for a big compliment." Playboy commented, "Natalie has always been a versatile vocalist, so it's no surprise that she possesses the intelligence and the chops to perform this material convincingly."

Cole's success in 1991 allowed her to branch into acting, although she did not find it easy. She told Jet, "Acting is a little more difficult than singing. The singing process is something that I've done all my life. When you are singing live, you have the audience there, you have all that inspiration going for you. But when you're on the set, it's just you, your co-stars, and the crew." In 1993 she first acted in the television drama series I'll Fly Away. She also starred in a USA Cable production called Lily in Winter in 1994. Other guest appearances included the Touched By an Angel hit drama series on CBS in 1997. However, the majority of Cole's work since "Unforgettable" was recording albums and touring. In 1993 Cole released Take A Look, an album of her performances of 1930s and 40s popular music. Entertainment Weekly commented, "Unforgettable sounds almost tentative next to Natalie Cole's latest, which— thanks to a canny selection of mostly unfamiliar old pop, jazz, and show tunes ... moves her definitively out of her father's shadow." Ron Givens of People wrote, "Cole carves her own identity while remaining true to her father." The title song from that album, which was once sung by Aretha Franklin, earned Cole another Grammy award for Best Jazz Vocal Performance. Cole told Jet, "This album actually is the album that I've always wanted to do and that is an album of jazz standards with great stuff that my dad turned me on to when I was about ten or eleven years old."

Holly and Ivy, a Christmas album released in 1994, "is a non- traditional album," she told Jet. "My approach was very 40ish, very Andrew Sisters, very fun and up." 1996 saw the release of Stardust, which included another "duet" with her late father called "When I Fall in Love." Stardust contained 19 Cole performances of songs from the 20s through the 50s. Cole told Billboard, "I'm a little nervous with this album, because it's the first time that I was really involved with every aspect of a project from start to finish." Stereo Review commented, "Only a versatile singer could handle this rich a mix, and Cole proves she's fully up to the challenge."

Cole's marriage to Andre Fischer ended in 1995 when she not only filed for divorce, but requested a restraining order against him. No comment was made by Cole at the time, but she began work on an autobiography titled Angel on My Shoulder. HBO will adapt the book for a television movie, starring Cole as herself. From her earliest days growing up with a legendary father, to losing him at 15, then setting out on a very successful career of her own, Cole has plenty of engaging book material.

Natalie Cole at the Bowl

Natalie Cole: Dialysis in the Day, Concerts at Night 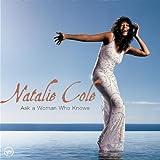 Ask A Woman Who Knows

Tell Me All About It

Ask A Woman Who Knows

All About Jazz musician pages are maintained by musicians, publicists and trusted members like you. Interested? Tell us why you would like to improve the Natalie Cole musician page.