Juliana is a 25-year-old singer/songwriter from Lancaster County, Pennsylvania. Self-taught on the piano and ukulele, she wrote her first song at age eleven. At fourteen, it was clear songwriting was her passion, and by sixteen, she released her first album, Dance in the Rain. She has competed locally, nationally, and worldwide in various competitions for voice and songwriting and won several prizes and scholarships over the years. In 2015, she co-wrote her single “Diamonds” with Jimmy Needham. Juliana has a retro jazz vibe that will take you back to the likes of Frank Sinatra and Ella Fitzgerald! Her acoustic version of “Blue” hit #1 on the FAB Chart in England, where she was runner-up for Artist of the Year, right behind Connie Talbot. “Blue” officially released in October 2018, and she is currently back in the studio recording her EP, VANITY.

Juliana Lane Big Band Soul Female Jazz Vocalist Vocalist Jazz Vocalist piano
“What Juliana has captured in 'Blue' is universal. Her heart-felt vocal performance is beautiful, convincing and authentic. When music can help you look within and ultimately lead you to a better place, that is a true triumph. I believe this was Juliana's goal and she achieves it with all the musical colors of 'Blue.'” — Sylvie Marie (Indie Spoonful)

“'Blue' blends jazz and inspirational lyrics in a way that dignifies both.” — Bob Marovich (Journal of Gospel Music)

“...She has found her niche with jazz.” — Chelsea Peifer 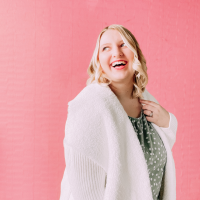 All About Jazz musician pages are maintained by musicians, publicists and trusted members like you. Interested? Tell us why you would like to improve the Juliana Lane musician page.