In the late 1970s he worked under record producer Joel Dorn, credited as Associate Producer on Leon Redbone's albums Double Time and Champagne Charlie, and The Neville Brothers' Fiyo on the Bayou. Willner has been the sketch music producer of Saturday Night Live since 1981. He was also a producer of the TV program Sunday Night hosted by David Sanborn.

Willner has produced albums for Marianne Faithfull, Lou Reed, Bill Frisell, William S. Burroughs, Gavin Friday, Lucinda Williams, Laurie Anderson and Allen Ginsberg, among others. He produced a live tribute concert to Tim Buckley, that ultimately launched the career of Tim's son Jeff. He has released one album under his own name: Whoops, I'm an Indian, which featured audio samples from 78 rpm records from the early-mid 20th century. 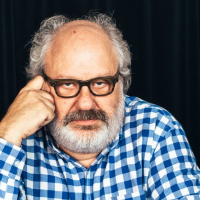 All About Jazz musician pages are maintained by musicians, publicists and trusted members like you. Interested? Tell us why you would like to improve the Hal Willner musician page.