You're Gonna Keep On Drinking? O.K., They'll Keep on Playing 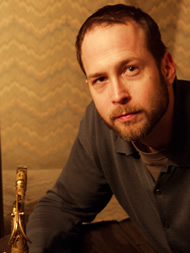 slideshow
Michael Blake Quartet with the bassist Ben Allison and the guitarist Steve Cardenas at City Winery in a series titled Wine & Jazz — A Great Pairing.

The saxophonist Michael Blake gamely addressed his audience between songs at City Winery on Tuesday night, though that exercise must have felt a little disheartening. Most of the club’s patrons were blithely impervious, engaged in tipsy conversation at their tables or near the bar. The room’s cavernous size and hard surfaces only amplified the din. And here’s the thing: this wasn’t at all unusual. This was the nature of the gig.

Mr. Blake appears at City Winery every Tuesday, in a series advertised as Wine & Jazz — A Great Pairing. (He’ll skip next week because of a double booking.) The engagement, which began last month, has the potential to become a kind of institution, despite its basic flaws in design. There’s no cover or strict minimum. The music is earnest and approachable. Mr. Blake is working with a top-notch band.

And perhaps most crucially, he seems intent on ignoring that “Wine” precedes “Jazz” in the series header. On Tuesday he dug in with his usual rhythm section, the resourceful bassist Ben Allison and the adaptable drummer Rudy Royston; his guitarist was Steve Cardenas, expertly filling in for Doug Wamble. Their first set was largely casual in tone, but it didn’t feel tossed off or hurried.