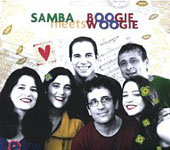 If you think that samba and boogie woogie are too disparate to ever meet, this CD will show you otherwise. An ensemble company of famous Brazilian singers and musicians have put together this collection of material recorded in Brazil during the '40s-50s. The singers—Monica Salmaso, Roberto Sa, Maucha Adnet, Mario Adnet, Alfredo Del-Penho and Ze Renato—sing individually as well as in different combinations, the instrumental accompaniment on each track depending on the song.

According to the CD notes, this was the bossa nova before the bossa nova and it seems that Brazil was affected by the boogie woogie rhythm pattern. It shows up in tracks like "Boogie Woogie do Rato," "Baiana no Harlem" and "Boogie Woogie na Favela," side by side with the samba beat. All of the songs were previously recorded by famous Brazilian singers and singer/arranger Mario Adnet has recreated the arrangements of those earlier versions. The singers featured here are all at the top of their game; their soft vocal quality and the fluidity of the Portuguese language creates joyful music that makes you want to dance. Though everything is sung in Portuguese, the liner insert contains the lyrics in both languages as well as a statement on each song's recording history.

Each track is a little gem, but check out the opener "Adeus America" and "Chiclete com Banana." The last song, "Brasil Pandeiro," written in homage to Carmen Miranda, contains lyrics which refer to Uncle Sam wanting to know about the samba. Obviously, the musical cultural exchange between the two countries has been going on for a long time. This CD demonstrates that fact in a most delicious manner. Oba, oba!!