By Troy Dostert
September 16, 2019
Sign in to view read count 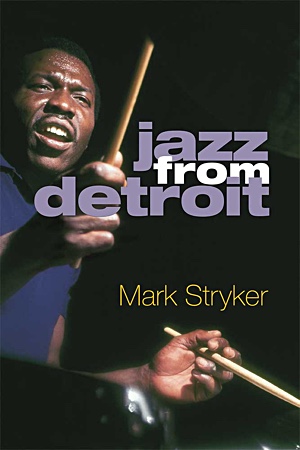 When music journalist Mark Stryker left the Detroit Free Press in 2016, yet another casualty of the ineluctable downsizing occurring at news outlets all over the country, jazz fans throughout metro Detroit feared they were losing a trusted voice, one that had edified listeners across the jazz and classical music spectrum for twenty years. But fortunately, this didn't mean the end of Stryker's insightful contributions to the music—quite the opposite, actually. For Stryker's newly-found freedom allowed him to draw copiously from his decades of jazz reportage in crafting Jazz from Detroit: a sharply written, vivid set of profiles of a host of past and current Detroit-based jazz musicians. In the process, Stryker not only celebrates these remarkable artists and the invaluable music they have created; he points to the lasting legacy of Detroit itself in shaping the jazz world through its distinctive stylistic tradition and unconquerable spirit.

The book isn't intended to be comprehensive. Stryker doesn't devote much space to the 1920s and 1930s, a decision he defends in light of the strong scholarship that has already documented the city's earliest jazz—most particularly Lars Bjorn and Jim Gallert's Before Motown: A History of Jazz in Detroit, 1920- 1960 (University of Michigan Press, 2001), which devotes substantial attention to pivotal bands like McKinney's Cotton Pickers and the evolution of the fertile music scene that emerged in the 1930s in Detroit's Paradise Valley. Stryker concentrates mostly on the bebop period and afterward, noting the common ground most Detroit jazz artists share in the essence of bop: "You can hear it in their allegiance to the fundamentals of swing and blues, the balance of head and heart in their improvisations, and the marriage of fluid instrumental technique and soulful expression" (xii). Nor does he seek to cover each and every significant Detroit jazz musician, graciously stepping aside when other book-length treatments have already examined figures like Paul Chambers, Betty Carter or Pepper Adams. But that still leaves a quite sizable list, from all-time giants such as Ron Carter, Sheila Jordan, Joe Henderson and the Jones brothers (Thad/Hank/Elvin), contemporary noteworthies like Kenny Garrett and Gerald Cleaver, to the up-and-coming generation that will carry the city's legacy into the future.

Stryker provides crisp, eight to ten-page sketches of each musician, with extensive reliance on personal interviews with scores of jazz luminaries. Documenting not only each figure's musical trajectory but also their relationship to the city, Stryker stresses throughout the book the community spirit that has nurtured Detroit's jazz scene from the beginning. He never misses a chance to trace out the interrelationships between artists or to describe their foundational role in mentoring younger players. His chapters on Barry Harris and Marcus Belgrave are standouts in highlighting not just their musical chops but, just as important, their unflagging dedication to sharing their wisdom with their students. But this quality infuses the entire book, really, and one is struck by the spirit of obligation and responsibility that possesses all of these artists. Entrusted with the precious gift that is jazz music, none of them are content to hoard it. Instead, they seek every opportunity to pass it along, providing a crucial thread that connects early-generation gurus like Kenny Burrell, who started the New Music Society in 1953-54 to provide a way for seasoned veterans to shepherd younger musicians, to Rodney Whitaker, whose current work in heading the Michigan State University jazz program has rendered it one of the nation's foremost incubators of jazz talent.

What gives the book a lot of its sparkle is Stryker's intimate knowledge of jazz: the music's distinctive traits are captured wonderfully with writing that carries the same melodic fervor and rhythmic punch of a fine jazz solo. An alto saxophonist himself, Stryker brings a musician's sensibility to his study of the music, and this is often displayed when he diagrams a player's moves in a solo. Here's an example from his chapter on Curtis Fuller, where he takes a deep dive into Fuller's solo on "Blue Train," from John Coltrane's legendary album of the same name:

"Fuller's five-chorus solo is one for the ages. He starts casually, riding the groove. His sound is large and sonorous, athletic but lithesome. The rhythm section shifts into double time at the end of the second chorus, but Fuller holds back, picking off a high C and sticking to his tempo. Two bars later he shifts into high gear and the notes speed by, perfectly enunciated, swooping through the full range of the horn. Who says the trombone is a bulky instrument? Strutting riffs start the fourth chorus. Syncopated flourishes carry him to the top of the fifth. The rhythm section slows to the original tempo as tenor and trumpet throw extra coal on the fire. Fuller lays out for a bar and then calls the congregation home, swaggering down a blues scale, turning somersaults behind the beat. He goes out with soul, grace, and a taste of the bouncing articulation that would become a trademark" (100-102).

Even though Stryker does sometimes delve into the esoterica that will likely only interest fellow musicians (minor thirds, ii-V-I progressions, and the like), this isn't done to excess, and it never gets in the way of the underlying emotion and excitement of the music. At its best, Stryker's writing makes one want to go back and listen once again to some of these amazing recordings, something he facilitates by listing a few personal favorites at the end of each chapter.

Stryker is also unfailingly thoughtful and deferential in his critical judgment, reluctant to grind his axe on less-than-stellar recordings in each artist's catalog, or to skewer stylistic choices that might have been made more for commercial than artistic reasons. His discussion of Donald Byrd's much- debated 70s-period albums, such as Black Byrd, is a case study in restraint, suggesting that while his music suffered from "too many string and synth sweeteners and mushy vocals," Byrd nevertheless could claim that rather than "selling out" he was in fact "selling up," "grabbing a piece of the capitalist pie usually denied black jazz musicians" (88). Stryker's ultimate purpose isn't to provide the final verdict on each artist's best (or worst) work, but rather to convey a genuine enthusiasm and passion for the contributions each musician has made to this art form.

Admittedly, the tone of the book does shift ever-so-slightly by its final pages. The brio and brawn that fueled jazz's heyday from the 1940s through the 60s, with Detroit artists often at the forefront, has given way to a tentative hopefulness: a measured optimism that the music will continue to flourish despite the challenges that have become all too apparent. The city's economic woes, especially since the recession of 2008, have been well-documented, and they have certainly taken a toll on the arts across the city. Stryker's lessons about the importance of community-formation are especially pertinent in this regard, given the cuts to public- school music programs that seem to be a preferred option for state legislators trying to balance their budgets. Institutions matter, and Stryker makes that message loud and clear. One loses count of the number of times outstanding schools like Cass Tech or Miller High School appear in the book: schools with rich music programs that imbued so many of these jazz legends with music theory and classical training, not to mention providing the mentorship they so desperately craved in helping them to become confident and purposeful young musicians. Envisioning a revival of that kind of arts instruction in today's Detroit Public Schools seems more of a fantasy than a reality. Although Stryker gives due credit to the philanthropic foundations and university programs that are endeavoring mightily to create the next generation of jazz musicians, these efforts seem to be missing some of the organic community spirit that pervades the earlier chapters of the book and which was so central to giving Detroit its distinctive jazz identity.

But despite the formidable obstacles ahead, Stryker writes with such contagious zeal that it's hard not to share his confidence that if jazz is to continue to thrive in the twenty-first century, Detroit will have a role to play in it. The city that has embraced its underdog status through all of its adversity is still producing lots of talented, dedicated musicians—many of whom are often choosing to remain rooted in the 'D' rather than seeking steadier, more remunerative work in New York or elsewhere. Their commitment to the city and to its continuing legacy may be the most hopeful sign yet that Detroit's jazz story is far from over.