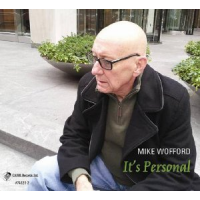 Pianist Mike Wofford can boast decades of high-caliber sideman gigs: notably with vocalists Ella Fitzgerald (for whom he served as music director), Mel Torme and Sarah Vaughan, as well as drummer Shelly Manne, saxophonist Phil Woods, guitarist Joe Pass and others. His studio work is amply represented on records by a dizzying variety of artists. And his frequent collaborations with his wife, flutist Holly Hofmann, have been warmly received. Solo sets are not unknown in Wofford's lengthy discography but, on the evidence of the solo recital It's Personal, would be welcome with greater frequency.

In particular, Wofford's style is well-suited to the solo recital format, given his attentive rhythm and full harmonies, his chords lushly provided in the manner of pianist Oscar Peterson (Wofford's liner notes point to the influence of pianists Jimmy Rowles and Ellis Larkins). As a producer, it's clear that his focus in this record was on the loveliness of the melodic line.

Wofford's own compositions are among the strongest in this coherently organized set. The title tune, dedicated to Hofmann, exudes the kind of stately soul that is pianist Robert Glasper's stock-in-trade. His tributes to Cole Porter and Earl Hines evoke the spirt of their dedicatees.

The other material spans decades and styles with more than a little audacity. Perhaps the finest moment of the set is "The Eighth Veil," written by pianist Duke Ellington and his longtime arranger Billy Strayhorn. Wofford slows down the mid-tempo, vaguely Latin 1940s-vintage original to reveal an elegiac melody of surpassing beauty. Wofford's version of "No More," meanwhile, a balladic vehicle for Billie Holiday, is taken straight, and provides even more elegiac beauty . Bop-era numbers from alto saxophonists Jackie McLean and Gigi Gryce add dynamic variety.

The greatest delight of It's Personal is the medley of two songs called "Once in a Lifetime." Both are in fact quite well known, and neither is remotely part of the jazz standards book. The first was written by vocalist Anthony Newley (whose picture appears in the dictionary next to the entry for "mannered") and Leslie Bricusse for the 1961 musical Stop the World—I Want to Get Off; the second is the highlight of the Talking Heads' post-New Wave album Remain in Light (Sire, 1979). Separated by a scant 18 years, the songs inhabit vastly different esthetic worlds; Wofford gamely milks each for its abundant musical pleasures.

Little Melonae; It's Personal; Cole Porter; The Eighth Veil; Spin; I Waited For You; Springsville; Candle; Nica's Tempo; Hines Catch-up (for Earl Hines); Once in a Lifetime/Once in a Lifetime; No More.