Idris Muhammad: Coming to Grips with His Greatness 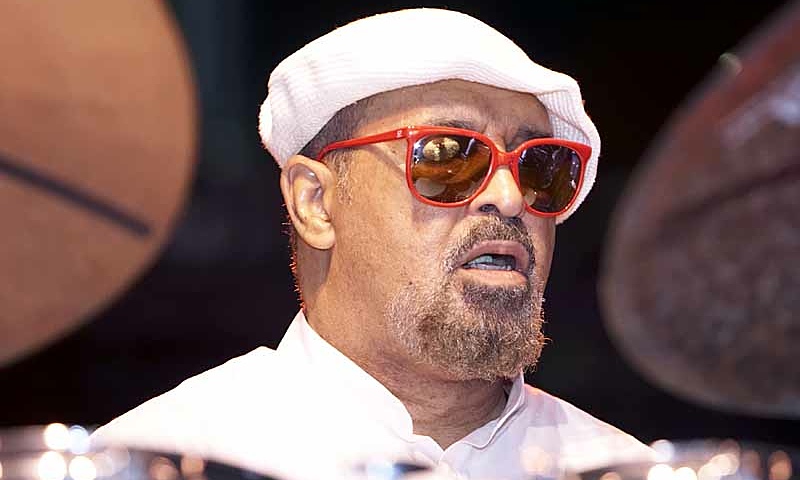 I tell you, man, I had no idea I was starting a trend, that I was playin' a style of drums that the guys who play the drums today learned how to play from.

This interview was originally published on May 2002.

"Style? No, I just play, man. I don't really have a style. Just being able to play music is a style, you know?" says the veteran drummer master Idris Muhammad in his laid-back and understated style.

Others know better than to take that self-effacing comment at face value. His style developed into a unique sound over the years, a New Orleans-based rhythm that has influenced many other drummers that followed. He's always had a special "something" and others know it, hiring him repeatedly for settings ranging from the R&B of Sam Cooke and Fats Domino to the modern groove music of John Scofield. He tours with Joe Lovano and Ahmad Jamal. He's played behind singers Betty Carter, Etta Jones and Roberta Flack. Played with jazzmen as diverse as Rahsaan Roland Kirk and Pharoah Sanders as well as Horace Silver and Herbie Hancock. His background comes from the funk of Arthur Neville and Curtis Mayfield. Over the years Idris has made music with so many legendary and renowned musicians that it's hard to keep track—he's on 136 albums recorded in Rudy Van Gelder's legendary New Jersey recording studio alone!

Idris Muhammad, born Leo Morris in New Orleans in 1939 into a family where his brothers also played the drums, readily admits he doesn't consider himself a jazz drummer. He's recorded with a Who's Who list in that genre after "the jazz guys" found out who he was, how well he played, and how he could bring different elements to the music. But to Muhammad, he's just a drummer.

This drummer may be under appreciated to those outside music—but not those inside. Only in the last few years, however, has he actually acknowledged his own greatness, finally ready to say that, yeah, he's pretty damn good. "Because I'm getting older now and getting kind of sentimental and saying, 'Did I really do that? Did I pass that much time?'" he says with a laugh.

You see, Idris Muhammad is just a flat-out nice guy. He'd rather just play than have people brag on him—a lesson he learned from Paul Barbarin, a New Orleans drummer who played with Louis Armstrong, King Oliver and Sidney Bechet. Barbarin told a very young Leo Morris that the accolades would come one day, but to let them roll off his back.

Idris is an agreeable fellow, all right. Talkative, amusing, descriptive, but not demonstrative. Twice he was awakened from a sound sleep by an inquiry into finding interview time within his busy schedule. Rather than being irritated, he was cordial and patient. The second time, rather than postpone, it was: "Let's do it. Let's see what questions you want to ask, so I can answer them," and off he went on an open and enlightening discussion of music and his career. Idris Muhammad is not full of himself. And unlike many musicians who feel the need to play right up until the end, Muhammad—an immeasurably in-demand drummer—wants to step aside soon and "retire," satisfied that he has lived a good life; a life of his choosing; a life that already has its share of accomplishments.

"I would like to stop traveling and just go fishin' and smoke my Cuban cigars [delightfully pronounced CIGì-gars in a New Orleans-tinted way] and drink Diet Coke. I would like to enjoy a little bit of my life, come off of the road. I've done a lot of great things in my lifetime. And I know I can play. Some guys never reach their goal of what they're trying to achieve in life, you know? My life has been quite fruitful," says Muhammad. "I'm 62 now and I've been on the road 47 years and I'm thinkin' that I don't really want die out here."

If he does go out, he's sure had a life that any musician would be proud of.

"I grew up in New Orleans. I started out with the Neville Brothers. That's my family. Arthur Neville had a band when I was 14 or 15 [the Hawkettes]. They needed a drummer. All of my brothers are drummers. They just happened to grab a hold of me because everybody else was workin.' That was the launching of my career, playin' professionally," says Muhammad.

Awake and not groggy, Idris Muhammad embarked on a discourse of his career with All About Jazz.

All About Jazz: Were you self-taught?

Idris Muhammad: I had played in school bands. I used to listen a lot to different bands play. My brothers was playin.' I couldn't play a lot and practice a lot because I didn't have a set of drums. In my neighborhood, there was a lot of schoolteachers and musicians. Uptown in New Orleans. It's actually the 13th Ward. There were bands that used to march through the streets. They would call it a "dry run." We had a lot of bars where we lived. Nightclubs. A restaurant in the neighborhood. So it was that kind of active place.

The guys in the neighborhood, they used to just start playin' at one of the guy's houses. The next thing you know, they'd come out in the streets and they would go from bar to bar. And the people would follow them. I was a young kid, excited about the music. I used to go and march with the band. I would dance under the bass drum player. I was that small. This big drum kind of attracted me because it was so loud—this big boom. I would go under the bass drum and dance and the guy would say to me "move your ass away from here before I hit you with this mallet." [laughter] Then I'd walk on the side of him.

AAJ: That probably came in handy playin' rhythm and blues.

IM: Yeah. That was the basis of our music was rhythm and blues at that time. I was never a jazz drummer. I really don't think today that I'm a jazz drummer. They kind of made me do this. And I ended up making so many records with everybody that they started saying I was a jazz drummer, you know? But I started off playin' rhythm and blues with Arthur when we had the band. We used to back up all of the artists that would come to New Orleans. Big Joe Turner. Muddy Waters. We was the band that backed them up. So we always knew the top 10 tunes that was on the charts at that time.

That's what I played. I have a style that I made up due to the marching band in the street. We had two Indian tribes in the neighborhood. Donald Harrison's father was the chief of our neighborhood. Then we had Uncle Charlie, he was the chief of a couple blocks down. I used to follow the Indians. They'd sing these songs and play these tambourines. So the rhythms of the tambourine, I combined them. I took that rhythm and the rhythm from the second line and that's what I played.

AAJ: You knew at a young age music was going to be your life?

IM: Yeah. I got hooked one Mardi Gras day. I think I was about 9. Some Dixieland guys came by to get a drummer. My mother and I and my brother were going out to the Mardi Gras. They said they needed a drummer. This old guy asked my mother could I play on the back of this truck with these old Dixieland musicians. And she said, "he's 9 years old and he's going to enjoy the Mardi Gras." Some how or another, he convinced my mother to let me go with them.

They had a big bass drum and one snare drum and a symbol. They built up some beer cases for a seat for me and I played with these old guys, man. And these guys were saying, "This kid can play." After about six hours of touring through the streets of New Orleans, they started passing out money and he gave me two $5 bills. And I asked him, do we get paid to do this? And he said yes. And I think that was it for me. That was the end of shinin' shoes and trimmin' rose bushes and cleanin' swimmin' pools. I used to do that to make a little extra money to go to the movies, you know? But that was it for me. I started right away, when my brother wasn't home, to practice the drums. I thought it out as a way of makin' money to get the things that I wanted to get without bothering my dad, you know? It led from one thing to another. Then Arthur needed a drummer. I was 15 and they recorded a song called "Mardi Gras Mambo" which is the theme of the Mardi Gras today.

AAJ: You played those early years with people like Fats Domino and Sam Cooke.

IM: Yeah, I did some things with Fats. And I was Sam Cooke's personal drummer. I was workin' for a guy named Joe Jones. He had a record out called "You Talk Too Much." It was a big record at the time. The record had gotten kind of cold. I was going to a nice restaurant in New Orleans to get a sandwich with Joe Jones, and I'm waiting for my sandwich and Joe goes in the dining room and sees Sam. Sam is complaining about the drummer with the Upsetters band. He was on tour in New Orleans that night. Joe said, "Look, my drummer plays anything." So he came and he got me to sit at the dining table with Sam. Sam said "Do you know any of my music?" I said, "yeah." He started singin' and I started playin' on the table and he hired me.

AAJ: Did you have other influences on the drums during this time?

IM: There were guys around New Orleans. I didn't know too much about drummer outside New Orleans. There were so many great drummers in New Orleans. Earl Palmer was there. Ed Blackwell was there. John Boudreaux and Smokey Johnson. We used to rehearse in my house, but they were more advanced than I was. We used to go and watch all of these guys play. That was my influence until I started practicing with John Boudreau and Smokey Johnson. They knew how to play like Max Roach and Art Blakey. They would come to my house. They would play Art Blakey and Max Roach. And I would say "I never heard of these guys? Who is this guy?" And they brought these records. And I would say, "Aw, I can't do that, man. I'll stay with what I do. I can't do that." And that was my first introduction hearing Art Blakey and Max Roach.