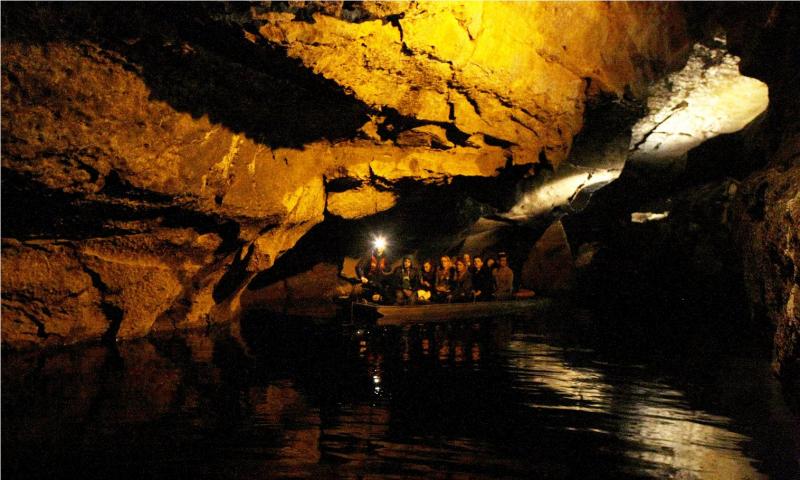 Standing on a street corner watching and listening to the world around you may not seem like an extraordinary event; after all, it's an everyday occurrence for millions of people around the world. For composer John Cage, it was a street corner—it just happened to be in Seville—and the infinite number of simultaneous visual and audible events he experienced while standing there that opened for him the world of theatre and circus.

Cage's 1979 composition "___, _______circus on _________" is a means of translating a book—any book—into a performance without actors. "Roaratorio, an Irish circus on Finnegans Wake" is his sonic translation of writer James Joyce's famous book, a fantastic cornucopia of sounds inspired by the text. Cage's piece fell out of repertory during the 1980s and 1990s until festival director Seán Doran staged it at the Belfast Festival in 1997, an event described at the time by the Daily Telegraph as "an enterprise of Kubla Khan proportions."

Seventeen years on, Doran and Cage's "Roaratorio, an Irish circus on Finnegans Wake" were reunited at the Happy Days Enniskillen International Beckett Festival. Having taken the English National Opera to Glastonbury with Richard Wagner's "The Ride of the Valkyries Act 3" in 2004, Doran could never stand accused of lacking either imagination or artistic cojones; the Derry man was always going to find a spectacular setting for another staging of Cage's "Roaratorio, an Irish circus on Finnegans Wake." His setting of Cage's work in the spectacular Marble Arch Caves in County Fermanagh duly provided a theatre as stunning as it was unique.

What was John Cage's Joyce-inspired work doing at a festival that celebrated the playwright Samuel Beckett? In a nutshell, the young Beckett was highly influenced by Joyce and the Happy Days Enniskillen International Beckett Festival was celebrating Joyce's influence on Beckett through a variety of events, including readings, discussions and concerts.

Just as Beckett's early writings were heavily colored by the musical score of Joyce's prose, so too in writing "Roaratorio..." was Cage. Like the three rivers that converge off the slopes of Cuilcagh Mountain to form the subterranean Cladagh River that courses through the Marble Arch caves, there's symmetry in the three artists' works that binds them—a fascination with rhythm and sound that trumps meaning.

Epic the setting, intimate the curation; having descended the winding steps that lead down into the caves, our group clambered carefully onto the small boat—maximum capacity twenty people—which ferried us across a lake to the pathway that wound its way through a cathedral of stalactites and stalagmites.

Walking through the caves to Cage's "Roaratorio..." was like dreaming of passing through a giant skull, while serenaded—in quadrophonic sound—by the people and places that mark the contours of Finnegans Wake. A cornucopia of sounds swirled around the cave walls: the percussive rattle of trams; peeling church bells; behind you the bleating of sheep; to the right monks chanting, and ahead a crying baby.

Music ran throughout the forty-minute production; a snatch of opera music here, a burst of classical music there. From on high and low, fore and aft, Irish traditional music punctuated the score. Joe Heaney's singing, violinist Paddy Glackin, Peadar Mercier and Mel Mercier on bodhran, flutist Matt Malloy and uilleann piper Seamus Ennis drifted in and out, creating the impression of strolling through Dublin's Temple Bar as the jigs and reels poured out through open pub doors.

Cage's narration, vaguely Irish in its lilt, came through only intermittently. In the depths and high ceilings of the caves, Cage's voice was barely audible, vying as it was with the sound of barking dogs, crowing cocks, factory racket, bird song, hammering, indeterminate cries and again and again the strains of Irish music—an Irish circus. Initially, it seemed as though the volume of the sound installation was too low, but it incremented the deeper the descent into the cave system.

Cage reputedly listed over four thousand sounds that he had identified in Finnegans Wake and the multi-tracked results were, unsurprisingly, somewhat cacophonous at times. That said, the volume levels were spot on, as the sound of the Cladagh River running through caves was a constant part of the overall soundtrack, as were the fat plops of water falling from stalactites. Had these sounds been drowned out by the taped recording it would perhaps have negated the point of being in the caves in the first place.

Forty minutes went by in a flash, but for that time Cage's music, voice and taped sounds transported those in the Marble Arch Caves to Joyce's pre-war Dublin. The cyclical, fragmentary sounds—undulating in density—evoked a dreamlike sensation of walking around and around in circles.