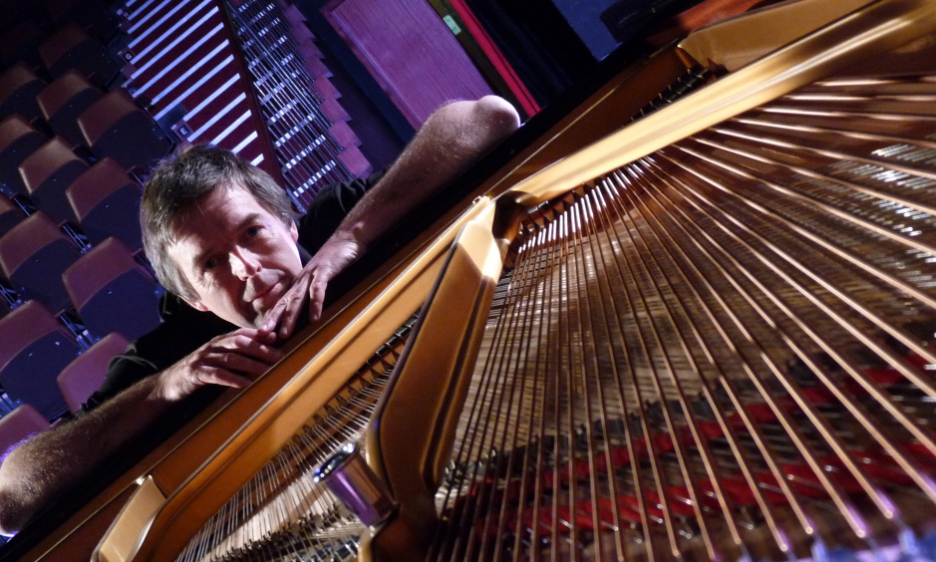 By JAKOB BAEKGAARD
August 20, 2018
Sign in to view read count

I’ve been living in Wales for the last 25 years, and I’m sure that one’s immediate environment must have an impact on one’s work. As a proud Welshman, I’m also aware of the cultural responsibility of not just looking ‘inward’ and am very influenced by Hermeto Pascoal’s idea of ‘Universal’ music. —Huw Warren

Welsh pianist and composer, Huw Warren, has been an important voice on the British jazz scene for many years. With a seemingly endless appetite for music, Warren has both been delving into Brazilian music with singer Maria Pia De Vito and played ethereal folk-inspired jazz music with another singer, June Tabor, in the trio Quercus. He has also worked as Tabor's musical director for many years.

Aside from his many gigs as a sideman, Warren is teaching and has been a co-leader of the acclaimed quartet, Perfect Houseplants. He has also pursued a lengthy career as a leader that has been just as curious and explorative as his approach as a sideman. His musical language seamlessly integrates classical pieces, Brazilian music, avant-garde and jazz. Compositionally, he is just as openminded and has taken on various projects and commissions, including composing music for movies.

Despite being a musically curious world citizen, Warren is also rooted in the landscape of his native country, Wales. Another way he is being grounded is through his instrument. Warren has found his true calling in playing the piano and has recently released his second solo piano record, Nocturnes and Visions (2018).

All About Jazz: When did you take up the piano? Was it your own choice or were you encouraged by family and friends to start playing?

Huw Warren: I think around 9 or 10 years old, I also studied violin and cello at the same time...My parents didn't want to force me in anyway; but, apparently, I was pretty determined and asked for lessons. Of course, after that they were super proud and supportive to all my endeavours, and I remember some nights being woken up to play for them and their friends!

AAJ: What is it about the piano as an instrument that you like?

HW: Probably the independent self-contained nature. i.e. the possibility of being your own complete ensemble at any time.

AAJ: Do you find that the instrument has any limitations? Have you ever found yourself in a situation where you couldn't express the sounds you were looking for on the instrument?

HW: The limitations are a great and ongoing creative challenge! For example, how to sustain and project a line like a singer (on what is basically a percussive instrument) or how to overcome equal temperament by preparing the instrument?

AAJ: You were born in Wales. Has the landscape and traditions of the country influenced your music in any way? I'm also thinking about your project Closure from 2012.

HW: Both aspects have influenced my work in some shape or form. Primarily in terms of source material and subject matter (e.g. Duw a Wyr—an album of Welsh hymns from 2005 with singer Lleuwen Steffan and saxophonist Mark Lockheart) but also, a sense of place and landscape has had a big influence on my compositions and titles. I've been living in Wales for the last 25 years, and I'm sure that one's immediate environment must have an impact on one's work. As a proud Welshman, I'm also aware of the cultural responsibility of not just looking 'inward' and am very influenced by Hermeto Pascoal's idea of 'Universal' music

AAJ: Could you tell about some of the formative experiences in your life as a musician?

HW: Well, I played a lot of classical music on both piano and cello whilst still at school, but also a family friend showed me a couple of vamps on the piano. Probably pretty unsophisticated, but it started me off on a whole journey of escaping from the score and notation. Moving to London in 1980 was a massive learning experience. Studying experimental music, and being exposed to so much new music and new musical experiences was exciting and deeply influential. Also meeting key younger members of the London jazz scene, (especially some of the guys from Loose Tubes) has led to collaborations that are still active 30 years later (players such as Mark Lockheart, Iain Ballamy, John Parricelli and Martin France). Also really important to me was the variety and availability of worldmusic projects in London at this time; not only a chance to learn from amazing musicians from all over the world, but also a confirmation of my feeling that my vision of Jazz should be as broad as possible.

AAJ: Your concert repertoire reflects a very eclectic approach to music. At least that was the feeling I got when I attended your solo concert at St Ann's Church during the Manchester Jazz Festival 2018. Why is it important to you to be able to embrace different musical styles and how do you put together a program for your concerts?

HW: Maybe this ties in with the answer of the previous question! I've always loved a wide set of sources for my music, but the challenge is to create a similar approach to the playing. For instance, Quercus mixes folk and jazz styles; but we are constantly looking for a common approach which allows us to find our own style. This seems a contrast to the fusion idea, where taking different elements from styles can sometimes lead to a rather bland statement. I find it an interesting challenge to try and play in a very similar way on, for example, a melody by John Dowland, an original composition, a Brazilian tune and a Jazz standard.

AAJ: Do you consider yourself a jazz musician? Why or why not? You have worked with June Tabor, who is connected to the British folk tradition. Is that a tradition that you relate to as well? In general, how do you relate to musical traditions?

HW: Always a tricky question! The simple answer is that it would be great just to be called a musician, as the J word can have positive and negative connotations. A deeper way of looking at it is maybe the idea that, rather than being a style, jazz is more of an attitude? Improvisation and creating a sense of surprise is definitely part of that attitude, but stylistically I feel this can be very open. Working with June has been a massive influence on my music—I was always interested in the directness and simplicity of folk melody, but to be part of June's incredible form of storytelling has taught me so much. Mostly about economy of material related to the emotion and drama of song, but also the commitment to lyric or musical statement.

AAJ: In a way, your music balances between what you might call art music and folk music. Is this distinction artificial to you and is it your intention to try to break it down?

HW: I'm always interested in combining different kinds of polarity in my music. Sometimes this can be as simple as intuitive (rhythm/groove) versus something more cerebral (harmony/composition techniques) or more random/free elements contrasting with more organized elements. So, in some ways I'm trying to ignore the distinction that you mention, but I feel both sides need to be present in my music. Of course, the balance might change in different projects, but I love both aspects!

AAJ: Your latest album, Nocturnes and Visions, is a solo piano album. I know you have also released another solo piano album, Infinite Riches in a Little Room (2001). Have you recorded other solo albums than that?

HW: Those two albums are my only solo piano recordings, but I've made a lot of records (e.g. with June Tabor, Quercus and Maria Pia de Vito) as duo or trio without bass and drums. I guess I've been developing different ways of playing solo whilst working on these projects.

HW: For Nocturnes and Visions I tried to start from a clean slate. One of the advantages of recording solo is that you can record far more material than you need, and then put together the final order from takes that you like best and that sit alongside each other best. Playing solo is usually just playing my favourite music—so in this case the Bach arrangements ("Prelude" and "The Bulgarian Stretch") had been around a while from another project, the opening tune is one of my favourite Hermeto Pascoal compositions "O Farol que nos guia" (which I have been playing a lot with fellow Hermeto 'addict' Iain Ballamy) and the closing track "Noturna" is a wonderful Guinga composition which I also performed and recorded with Maria Pia de Vito. The other pieces are all original and are a mix of new pieces, older pieces and improvisations

AAJ: A lot of time has passed since Infinite Riches in a Little Room. What has happened with your approach to solo piano since then? Do you find your aesthetic has changed?

HW: Solo piano is one of those ultimate challenges for pianists, so I'm constantly rethinking the approach! I'm not sure if my aesthetic has changed, but I'm certainly more interested in making an emotional connection with the listener than I am in developing virtuoso skills for their own sake. Of course you want to have fun whilst playing (and surprise yourself as often as possible!) but generally I'm much more confident of playing less and trying to really refine the musical statement. In terms of improvising, I'm still working on ways of creating a language that isn't clearly recognizable as jazz (or at least bebop!); which was actually my intention on Infinite Riches.

AAJ: What is your take on the lineage of solo piano albums? What does it mean to play solo to you?

HW: In terms of the lineage of the solo record, I love all kinds of approaches! Sometimes people are surprised when you play in a certain way but are quite happy to listen and talk about other styles....I think the general evolution has been from brilliantly sparkling technical music (Art Tatum, Oscar Peterson etc) to a more personal musical statement (maybe starting with the Bill Evans album Alone or even more so The Solo Sessions). For me, Keith Jarrett's Facing You (1971) was a gamechanger in terms of the depth and vibe of the music. Some of my other favourite solo albums have been Alma (1986) by Egberto Gismonti and more recently I've loved Craig Taborn's Avenging Angel (2010) and Tigran Hamasyan's An Ancient Observer (2017).

HW: I really liked the idea of a slightly more contemplative album, hence the Nocturne/Nightime label. The Visions part is much more open ended...I'm thinking of visions in terms of dreams and imagination, so not really in an overtly spiritual way, although I'd love people to make their mind up in their own way on that!

AAJ: One of the tracks on the album is an homage to the late pianist John Taylor. Could you tell about your relationship with him and his influence on you?