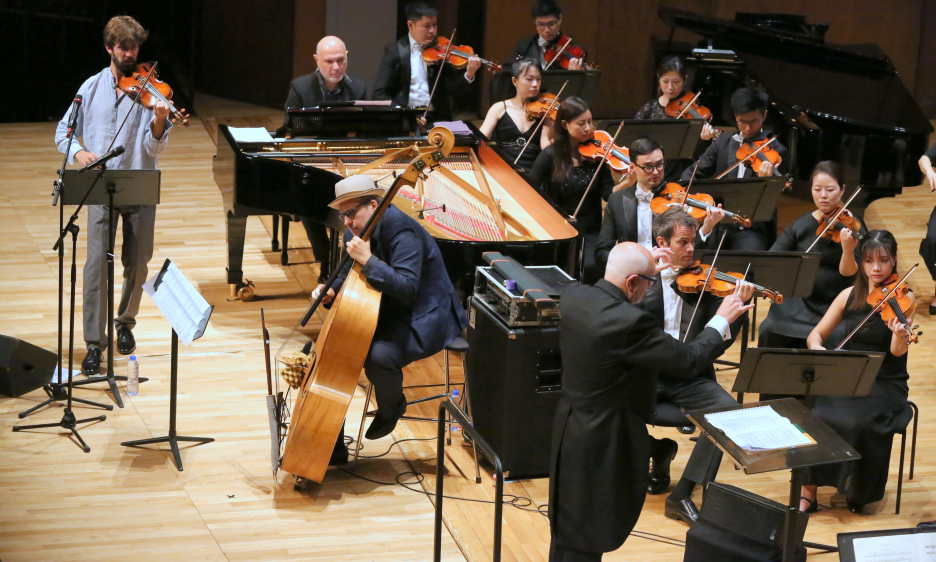 Oxymoron, or blasphemy? The very concept of "symphonic jazz" might provoke polarizing opinions in the more faithful fan—but few have spliced orchestral traditions with an improvisational approach quite as brazenly as Georg Breinschmid.

The Austrian double bassist was once a member of the esteemed Vienna Philharmonic, before quitting 20 years ago to pursue his true love—soon after joining the jazz-inclined Vienna Art Orchestra and clocking appearances with luminaries including Archie Shepp and Kenny Wheeler. But fate and fortune has brought Breinschmid back to the concert hall—and back to the classical repertoire. Tackled, it must be said, in a distinctly heretical manner, in eccentric evidence at August 18's appearance backed by the Hong Kong Sinfonietta, at the latter's permanent home in Hong Kong City Hall.

For all the bassist's theatrics—plucking, strumming, bowing, thwacking and smacking his instrument with merry aplomb—the greatest visual pleasures were found in casting glances away from the star attraction, to consider the perplexed features and furtive glances of the tuxedoed players around him. And the residents had cause for consternation, as their guest proceeded to dissect and deconstruct first Bartók's Romanian Folk Dances, and then a modern reimagining of Bizet's much-loved Carmen-Fantasie, credited to composer Tscho Theissing but owing twice as much to Breinschmid's brassy improvisational approach—which tightrope-dashed so daringly between academic smarts and crowd-pleasing pyrotechnics, it was often easiest to forgo all existing measures of good taste.

It almost felt as a relief when Breinschmid left the stage, allowing the orchestra to reclaim their home turf for a rousing trio of dances from On the Town . At this point in 2018, concertgoers might feel a certain malaise amid the tumult of Bernstein tributes marking what would have been the icon's 100th year, but the Sinfonietta's sympathetically swinging delivery proved the classical establishment's ideal antidote to their impudently jazzy visitors.

For this musical fruit salad was presented in four orderly chapters, and there were no such bourgeois concerns of taste or tradition in the evening's final quarter—which united the Sinfonietta with Breinschmid's trio to deliver a quartet of the bandleader's own works. Knotty, idiosyncratic compositions written in tricky time signatures and drawing from disparate musical traditions, the orchestra surpassed itself in its supporting role, laying out lush harmonic nets and mounting frenzied sparring challenges, led with evident enthusiasm by British guest conductor Roderick Dunk.

These ensemble arrangements—in three of four cases by Michael Radanovics—had the welcome effect of reigning in the trio's more extravagant indulgences, in joyful evidence during the preceding segment, which saw Breinschmid, Bulgarian pianist Antoni Donchev and German violinist Florian Willeitner perform a wantonly hyperactive, unaccompanied chamber-jazz set, which careened from an opening dose of "JSB" (Bach to you and me) through dashes of tango, samba and folk dance.

So much of the evening was sonically unprecedented—with no existing mental box to file away what was being processed—it was often cerebrally exhausting to absorb. But our synapses weren't the only organs being strained—after more than two intermission-less hours, the disconcertingly cheerful Breinschmid returned to the stage, wrapped his battered plucking figures in plaster-tape, and launched into a second, unplanned encore. Gā yàu!