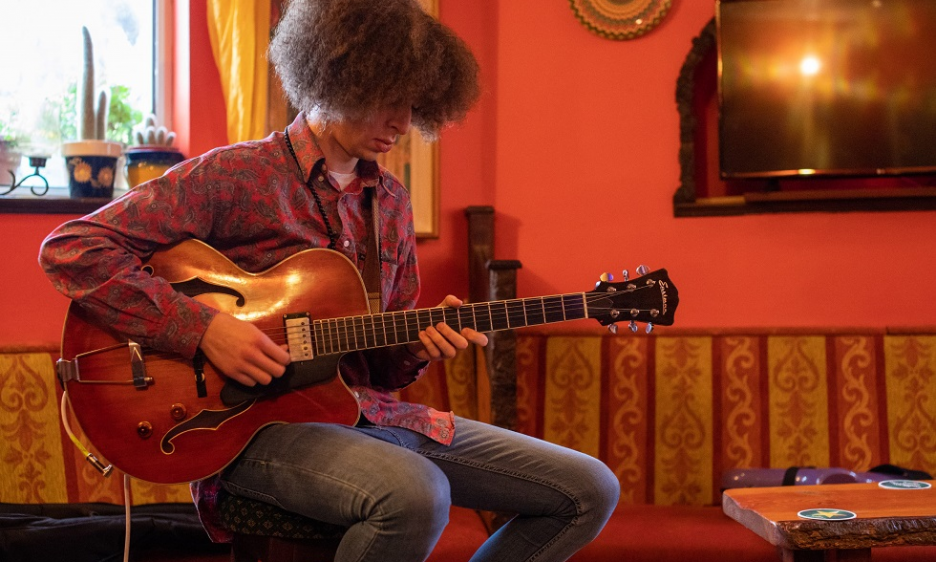 By IAN PATTERSON
December 19, 2018
Sign in to view read count

Involving the community in the creative process so that it has a vested interest in the FWJF is surely the best way to ensure the longevity and relevance of the festival in this small town of two thousand people.

It only rained twice during the inaugural Falcarragh Winter Jazz Festival—all day Friday, and then all day Saturday. Still, no amount of rain or wind could dampen the spirits of those who turned out to support this bold initiative by local lads Conor and Micheal Murray. Bold because jazz doesn't have any footing in this small town seeped in Irish folk music, country music and standard pub-band fare. As one French expat exclaimed: "I have been living here for thirty years and I have never seen jazz here."

For the Murrays there was always the nagging worry beforehand that nobody would turn up. Who would give up their Friday and Saturday nights, or their Saturday afternoon, to watch straight-ahead, non-vocal jazz?

The FWJF was competing with other live music, a Christmas crafts fair and, most surprisingly of all given December's fairly quiet cultural calendar in these parts, the opening of a new community hall. The latter event drew almost half the townspeople, where there was more live music to feed on. Comedic films have been made in Ireland on lesser pretexts than that of trying to run a jazz festival with the odds stacked against you.

Visions of low-key gigs, stoically performed before three old men and a dog, must have flashed across the minds of the festivals' Artistic Directors, Conor and Micheal Murray in the days leading-up the festival. Would the FWJF survive such potential disinterest to resurface in 2019?

In the end there was nothing to worry about as people turned up in very healthy numbers to enjoy uniformly excellent music. What's more, the atmosphere at the concerts—staged predominantly in local pubs—was positively electric; how often do you see a standing ovation at the end of a first set?

Wisely, perhaps, the Murrays opted for a fairly modest programme for the first edition of FWJF, with six concerts spread over two days. Headlining the first day, and opening the festival, was Dutch guitarist Jesse van Ruller.

The back room of The Gweedore Bar was packed for the first ever concert of the FWJF -the honor falling to the Jesse van Ruller trio. Something of a European jazz guitar icon, van Ruller grabbed a little piece of jazz history in 1995 when he became the first ever European to win the prestigious Thelonious Monk International Jazz Guitar Competition. Nearly a quarter of a century later, van Ruller has ten CDs under his belt and has collaborated with top European and American names, such as Michiel Bortslap, Idris Muhammad, Bill Stewart and Christian McBride, to name but a few.

Joined by Waringstown's Mobo Award-nominated David Lyttle on drums and in-demand UK bassist Conor Chaplin, van Ruller delivered a beguiling set of jazz standards. From the rhythmically vibrant opener, "All or Nothing at All," the guitarist captivated with melodious improvisations of often dazzling technique. In part, van Ruller's flowing elegance was a throwback to the Herb Ellis, Jim Hall school of jazz guitar, particularly on slow-swinging numbers like Billy Strayhorn/Duke Ellington's "Isfahan," though with a modern edge to his playing more akin to that of Kurt Rosenwinkel.

During his most probing solos, such as on a storming version of Joe Henderson's "Punjab," van Ruller found intuitive partners in Lyttle and Chalpin. A guitar vamp invited an extended solo from Lyttle, who worked his kit with an impressive mixture of explosive punch and artful finesse -his rattling, rim patterns at one juncture conjuring tap dance rhythms. Chaplin turned in a lyrical solo on another Strayhorn tune, the brushes-led ballad "Chelsea Bridge," though it was van Ruller who stole the show with a finely sculpted, quietly thrilling improvisation.

An African-flavored Lyttle solo, employing just hands, paved the way for Dizzy Gillespie's "Con Alma," with van Ruller and Chalpin's improvisations juggling liberally with the main melody. There were further visits to the songbooks of Henderson ("Isotope") and Ellington ("Prelude to a Kiss"), with van Ruller veering into more angular, John Scofield-esque territory on the former, while the slower tempo of the latter highlighted the guitarist's caressing, bluesy lyricism.

The trio closed a mostly up-tempo set with a lively, bebop-style interpretation of the 1950's Broadway musical hit "Just in Time" -a vehicle for charged salutes, individual and collective, from the three musicians. A standing ovation greeted van Ruller, Lyttle and Chaplin -and represented an auspicious start in the first chapter of the FWJF.

The Murray twins are well used to playing together, having grown up in Falcarragh playing Irish traditional music before discovering jazz in their early teens. Since 2013, bassist Conor and alto saxophonist Micheal have been regulars at the Sligo Jazz Project, a summer jazz school of international reputation, where they have honed their respective crafts. Three years of jazz studies at the Royal Conservatoire of Scotland in Glasgow under the wing of Tommy Smith, have helped nurture two of the most promising young jazz musicians in Ireland today.

In the intimate back bar of The Shamrock, an emblematic watering hole in Falcarragh, the Murrays were centre stage for an hour of jazz standards. The duo's opening number. "I've Never Been in Love Before," featured extended solo spots from both and left no one in any doubts as to the high quality of the music on offer. Regardless of instrumentation a duo presents particular challenges, but the Murrays displayed both a flexibility in the traditional roles of their respective instruments, mixing up rhythmic and melodic roles so that the whole was greater than the sum of the parts. On Wes Montgomery's "Fours Six" both flexed serious improvisational muscle, with Micheal's susurrus counterpoint contrasting with Conor's tireless bustle during their respective solos.

Micheal's alto was chief protagonist on the rhythmically charged "You Stepped Out of a Dream," the saxophonist's mazy solo striking a balance between the fire of Charlie Parker and the more measured lyricism of Charlie Parker. That said, his unaccompanied intro to Jimmy Van Heusen/Eddy DeLange's "Darn That Dream" suggested a strong personal voice in the making. Conor, for his part, attacked his strings with a Charles Mingus-esque hunger, constantly blurring the lines between comping and soloing. The duo, whether exploring bluesy balladry, or boppish domains, as on "Alone Together" and Duke Ellington's "Cotton Tail," showed not only a deep affinity for the music, but the technical nous to carry it off splendidly.

Following their gig a loose jam session ensued, with the Murrays, in the absence of many participating musicians, doing most of the heavy work. An elderly gentleman brought a scratchy sounding violin to the party but gained the respect of all for his heartfelt vocal renditions of a couple of standards. Derry guitarist Michael Watters gave a more than respectable account of himself on another couple of standards. With so few jazz musicians in Falcarragh— and likely none at the Murrays' level—it was always going to be a surprise if the jam session really flew, but credit to the Murrays and the couple of participants for at least hoisting the flag.

Waringstown drummer David Lyttle has gone from strength to strength since his MOBO and Urban Music Award nominations for Faces (Lyte Records, 2015). In demand all over the world, Lyttle has made numerous tours of the U.S., Europe, and China. Active in duos, trios, quartets and as leader of his groups, the last couple of years has seen Lyttle develop a solo drum show, improvising around recordings of spoken dialog. He's done it in Mandarin Chinese and in English, but for FWJF Lyttle was commissioned to do his drum-and-tape show with the Irish language.

It was an imagination commission by the Murrays, bringing into the artistic loop as it did the children of the local school, who prepared poems in Irish based on Falcarragh and its significance to them. Involving the community in the creative process so that it has a vested interest in the FWJF is surely the best way to ensure the longevity and relevance of the festival in this small town of two thousand people.

Lyttle's performance took place in a small room of An Tsean Bhearraic (the local visitor centre) at one o'clock in the afternoon. Extra chairs and beanbags were employed to seat the audience, which was comprised overwhelmingly of adults. There were a couple of children present but this was not exactly a child-friendly gig. The four seats just a foot or so in front of the drum kit proved even too intimidating a front line for most of the adults present.

It seemed like a trick missed, as a performance in the school to the children who had contributed the poems might have been more appropriate and, with jazz struggling everywhere to attract younger audiences, it would have been an excellent form of outreach to boot.

In a two-parter, Lyttle began with a recording made in Brooklyn, New York, in October. Individuals met on the streets expressed their thoughts and opinions on changes in the community over the years. To the cadences of the voices and the messages relayed, Lyttle responded musically, working the surfaces of his kit with hands, brushes and sticks -his rhythms rising and falling in intensity. One elderly man spoke of drugs and killings in the 1970s, another spoke of childhood games played on the streets in the years before video and computer games.

A woman observed how older residents are being priced out in the gentrification process, how the jazz clubs have gone and how places were you could once listen to music without paying a fortune are gone. A man born and bred in Brooklyn described the influx of Asian immigrants in the 1970s -he himself being the grandson of Italian immigrants who arrived in the 1950s. The same man noted the astronomical hike in the price of real estate over the decades, and how children are becoming a rare sight. Despite the changes, old-timers and blow-ins alike spoke of Brooklyn's vitality and the friendliness of people.

A brief drum intro preceded the Irish-language drum-and-tape segment. Children spoke of their relationship with Falcarragh -its coffee shop, the football field, the beach and so on. All the children began their poems by saying "Is mise..." ("I am...") -I am the football field, I am the coffee shop. I am Falcarragh. Interestingly, Lyttle's response to the children's poems was less stormy than the Brooklyn tape, with less percussive bustle and rhythmic agitation. The rhythms were smoother, flowing like a small stream.